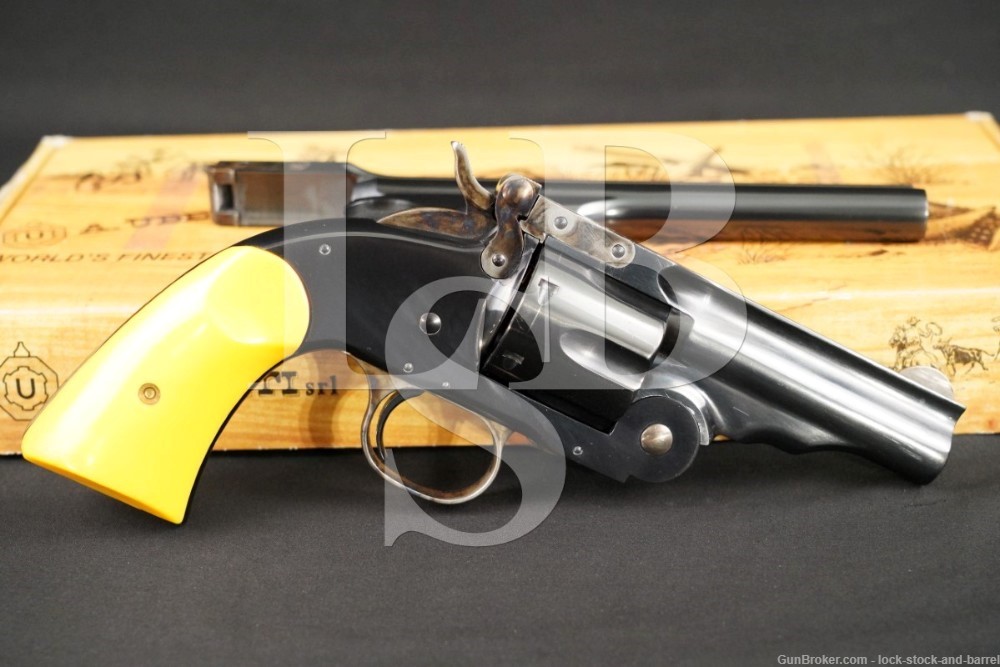 Action Type: Single-Action Top-break Revolver with 6-Round Cylinder and Extractor

Markings: The left side of the installed barrel is marked “CAL.45 LC.” and “A. UBERTI-ITALY”.  The cylinder has Italian proof marks on the outside and assembly number “89” on the rear. The. The butt-strap features the serial number “F00809” and “U.S.”. The bottom of the frame has “BU” in square date code. The left of the grip frame has assembly number “89” under the grip panel.

The original barrel is marked “CAL.45 LC. / +STOEGER-ACCOKEEK, MD-A. UBERTI-ITALY+” on the left, the bottom has two Italian proofs and the left of the hinge has assembly number “89”.

Barrel Length: The installed barrel is 3 1/2″, the original barrel is 7”

Sights/ Optics: The front sights are blades fixed at the muzzles. The rear sight is a “V”-notch integral to the barrel latch.

Stock Configuration & Condition/ Grip: The grip panels are two-piece faux-ivory plastic panels. The grips have minor handling wear. The left panel has light tool marks around the grip screw. The right panel has a repaired chip-loss at the bottom across the indexing pin hole. Overall, the grips are in Good-Very Good condition as repaired.

Bore Condition: The bores are bright with sharp rifling. There is no erosion in either bore.

Overall Condition: The revolver retains about 96% of its metal finish. There are some scattered minor nicks, scuffs and scratches. The 3 1/2″ barrel has a few spots of more notable wear around the hinge. The 7″ barrel has a small cluster of more notable nicks on the left near the muzzle. The action shows light operational wear with a thin, incomplete turn-line on the cylinder. The markings remain clear. The screwheads range from sharp to lightly tool marked with strong slots. Overall, the revolver is in Fine condition.

Mechanics: The action functions correctly. The single action trigger is crisp. The cylinder locks with only barely perceptible play on each chamber when the trigger is depressed. The barrel locks with minor play on the frame. Due to the lack of an additional arbor and the tight fit of the arbor to the 3 1/2″ barrel, we did not install the 7″ barrel to test mechanics with it installed. We did not fire this pistol. As with all previously owned firearms, a thorough cleaning may be necessary to meet your maintenance standards.

Box Paperwork and Accessories: The pistol comes with its serial matched box & the original barrel as described.

Our Assessment: This Uberti replica of the Model 1875 Schofield Revolver is a single action top-break revolver chambered for the .45 Colt cartridges. The gun was originally designed by Major George Schofield for use with the cavalry and became a popular option among shooters in the late 19th century. Particularly useful for the cavalry, the revolver’s top-break design and automatic ejection made the gun far easier to load and unload while in the saddle with reins held in one hand. Ironically, the original 1875 had to be chambered for a new cartridge, the .45 Schofield, as the top-break action was not rugged enough for the .45 Colt cartridge. Modern advances in metallurgy have made it so that these reproductions can be chambered for the .45 Colt, an improvement which may have displaced the 1873 Single Action Army if it had been made in 1875! That said, it’s probably best not to run hot Cor-Bon or Buffalo Bore rounds through this revolver. The gun comes with a 3 1/2″ barrel installed as well as its original 7″ barrel. This modern replica is beautifully finished and has faux ivory grips to give it some added flavor. This is a beautiful handgun that you do not want to miss out on!