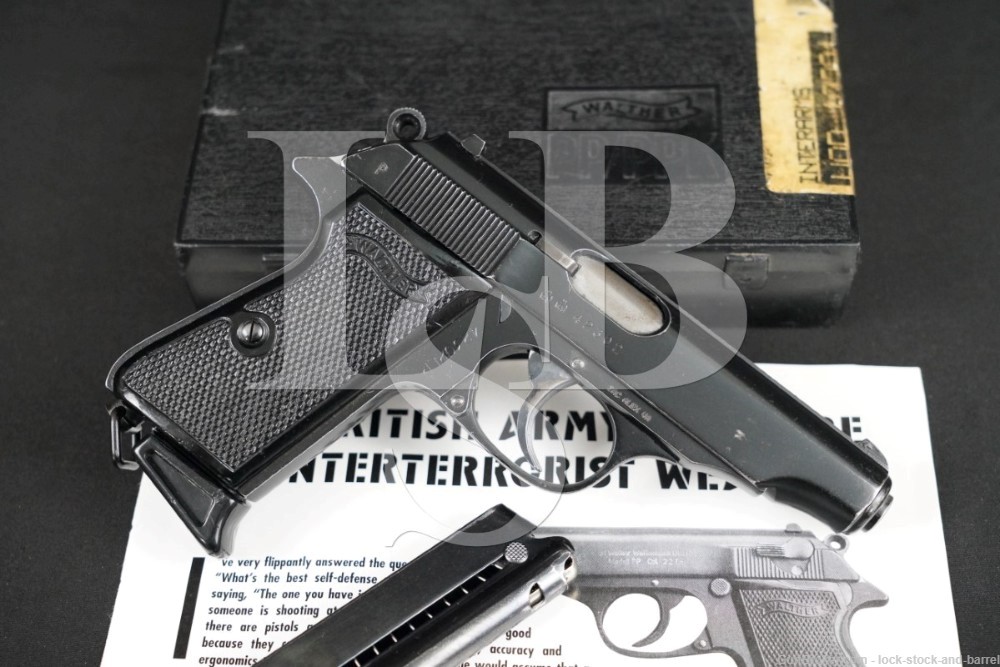 Sights / Optics: The front sight is a white dot blade integral to the slide. The rear sight is a square notch blade with white sighting reference point. The top of the slide is serrated with a matte finish to reduce glare.

Stock Configuration & Condition: The grips are two piece checkered plastic with a Walther banner logo near the top of each panel. There are some scattered light nicks, scuffs and scratches. The checkering is well defined. There are no chips or cracks present. The grips rate in Very Good-Fine overall condition.

Overall Condition: This handgun retains about 92% of its metal finish. The finish is thinning at some edges, most notable at the front of the slide. There are some scattered light nicks and scratches, some not through the finish. The grip areas and controls show light handling wear. The action shows operational wear. The screw head is sharp. The markings are clear. Overall, this pistol is in Very Good condition.

Box, Paperwork & Accessories: This handgun comes in a black plastic box with a non-matching label. The box is in Fair overall condition with moderate external wear. A total of two 8-round magazines are included

Our Assessment: With a name like “The Troubles”, the period from the 1960s to the 1980s in Northern Ireland was not a particularly fun time for anyone involved. It was a period of low intensity conflict between Irish Nationalists who desired Northern Ireland to join the Republic of Ireland and Unionists who preferred to remain a part of the United Kingdom. The Ulster Defence Regiment was raised in 1970 and recruits were raised from the Northern Ireland population. While the soldiers of the Regiment were issued arms while on duty, they did find that they were also in danger when they were off-duty, and in 1974 approximately 3,000 Walther PP pistols chambered for .22 LR were purchased for issue as personal defense weapons. With a permit, the soldiers could legally carry these pistols while they were off-duty for self protection.

These Walther pistols were designated the L66A1 by the British and, interestingly, were proofed by the German military but did not receive British proof marks. The pistols were in a standard Walther configuration, but around 1980 the pistols were refurbished. In addition to having a new Suncorite finish applied, an improved firing pin was installed and some, such as this one, received a lanyard ring on the bottom of the frame. The pistols remained in service until 1989 when they were replaced by the Walther P5 Compacts and Sig P230s. After being replaced, the pistols were sold commercially, resulting in about half making their way to the United States.

This example is in Very Good condition, showing external wear consistent with its intended use, but retaining a great bore and strong mechanics. It would be a great addition to any collection just by virtue of its history with the UDR, but it also comes from the collection of author Kevin Williams, best known for his exceptional work on the topic of General Officers Pistols & Clandestine Organization Pistols of WWII. Hopefully, this Walther won’t give its new owner any Troubles. Please see our photos and good luck!