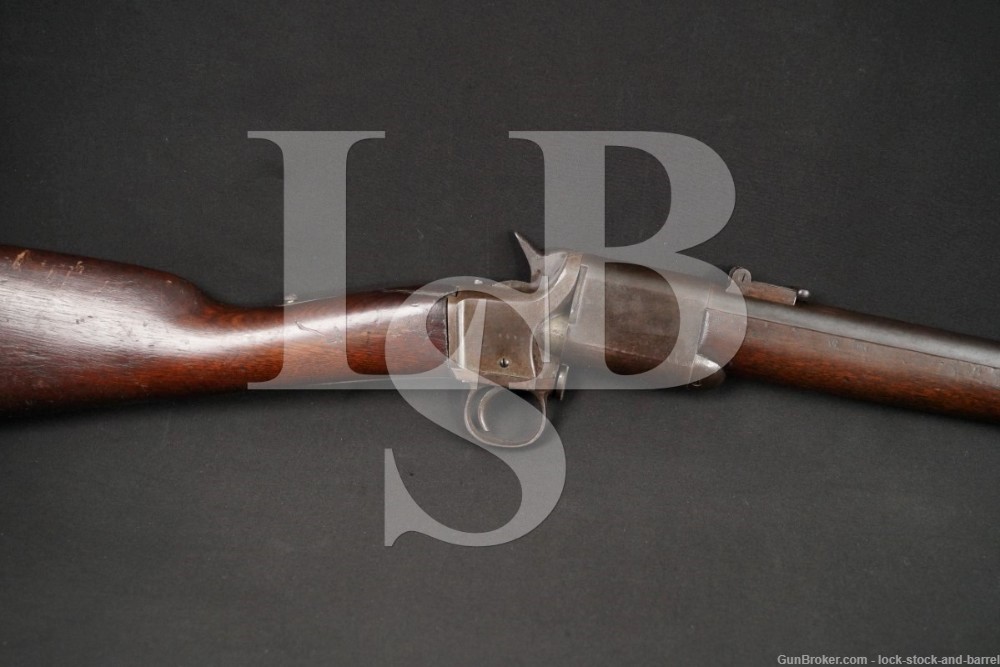 Sights/ Optics: The front sight is a blade dovetailed by the muzzle. The rear sight is a ladder sight fixed to a dovetail base. In the down position the rear sight presents a “U”-notch. When raised, the ladder presents an integral “V”-notch at the top and a “U”-notch slider. Please note, the slider is fixed in the up position and can not be adjusted.

Stock Configuration & Condition/ Grip: The stocks are two-piece smooth wood featuring a forend with a barrel band secured by a spring at the bottom and a butt that has a straight wrist, straight comb and a semi-crescent butt-plate. There is a sling swivel fixed on the belly by the toe, but the sling swivel that was fixed to the top tang of the butt-plate has broken off. The stocks have light-moderate handling marks, nicks and scuffs. Notably, the front left portion of the forend has a light chip, there is a long but light crack that extends from the magazine across the wrist to the butt, there is a very light crack above the aforementioned one which extends slightly onto the wrist, there is a light crack on the left portion of the top-tang’s tip which curves onto the wrist, another light crack extends from the center of the top-tang’s tip onto the wrist, the sling swivel is fixed in the up position and can not be adjusted, there is a light ding between the comb and heel plus a patch repaired chip is situated between the right side of the top tang and action. The LOP is approximately 14.25” from the trigger to the rear end of the butt-plate. The butt-plate is coated in moderate oxidation and has a few patches of erosion. Overall, the stocks are in Good condition for antiques.

Type of Finish: Originally Blued and Case Color, now the gun is Patina

Bore Condition: The bore is semi-bright with mostly sharp rifling. There is some light scattered pitting in the bore.

Overall Condition: The carbine retains none of its original finish. The gun is coated in light-moderate patches of surface oxidation and has taken a patina color. There are scattered light handling marks, scuffs and nicks. The markings remain clear. The screwheads have tool-marks and oxidation, but they remain serviceable. Overall, the carbine is in Very Good condition as an Antique.

Mechanics: The action functions correctly. We have not fired this repeating carbine. As with all used firearms, thorough and consistent cleaning may be necessary to meet your maintenance standards.

Our Assessment: The Triplett & Scott Carbine was designed by Charles Parker.  It was the second arm designed by Parker who would go on to co-found Meriden Manufacturing Co. and he also famously co-founded Parker Brothers, arguably one of the most significant shotgun manufacturing companies in history. The Triplett & Scott Carbines were made under contract for the State of Kentucky during the closing months of the Civil War, with a total of 5,000 units manufactured. The guns were meant for Home Guard troops in Kentucky assigned to defend General William T. Sherman’s supply lines which ran through the State. The carbines arrived after the fighting had subsided and did not see action during the Civil War.

These carbines have a unique action, typical of the ingenuitive concepts which arose as muzzle-loaded percussion and flintlock ignition weaponry was replaced by breech-loaded cartridge firing arms. The most unique aspect of the gun is how it is loaded: the hammer is brought to a half-cock and the barrel lock is release by a notch on the top left portion of the receiver, the barrel is then twisted to the left which engages the extractor allowing the user to remove a spent cartridge, the barrel is then twisted further until it is over the magazine and a new cartridge is loaded and finally the barrel is twisted back to the right, into its original position, where the carbine can be fired and the process is repeated. One of the greatest drawbacks of these carbines was the odd placement of the tubular magazine, it was placed off center on the left side of the butt and the butt-stock was prone to cracking due to the odd-design. The gun is a unique design that is typical of the innovative, albeit sometimes unorthodox, weapons developed during the Civil War. This gun has some handling wear but it is still relatively well preserved. The gun is historically significant and should appeal to fans of unorthodox weapons and Civil War history buffs. Good luck on your bid!