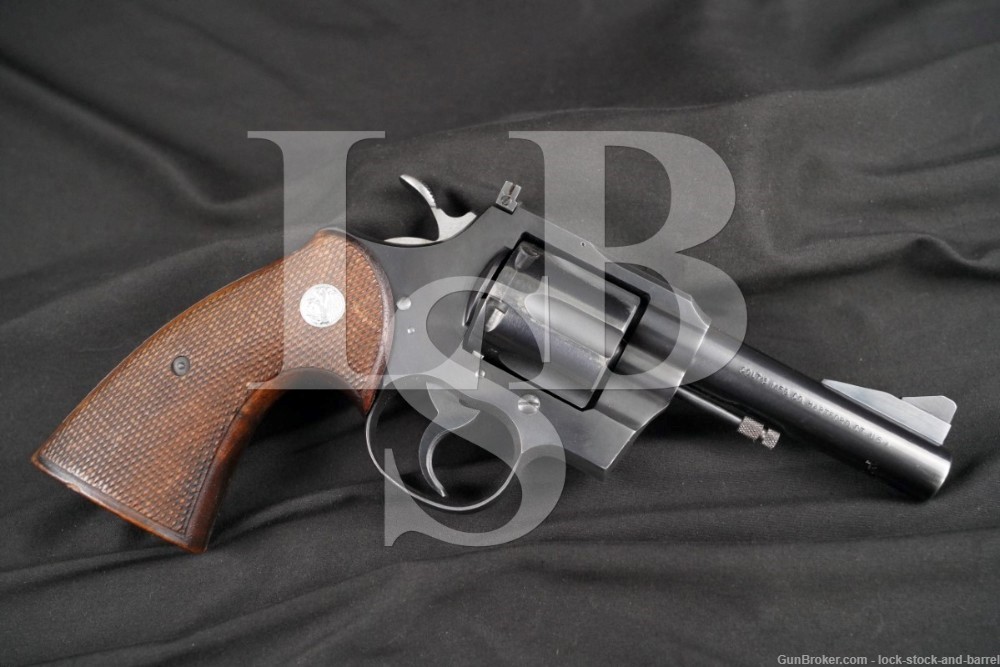 Sights / Optics: The front sight is a serrated ramp integral to a serrated riser on the barrel. The rear sight is a square notch leaf that is set into a base that is adjustable for windage and elevation and is pinned to the top strap.

Stock Configuration & Condition: The grips are checkered walnut with Colt medallions. The grips have some scattered light nicks, scuffs and scratches. There is a patch of compressed checkers on the left panel between the grip screw and medallion. There is one more notable scratch on the right panel in front of the medallions. There is some scattered thinning finish. The checkering is generally well defined. There are no chips or cracks. The grips rate in about Very Good overall condition.

Type of Finish: The finish is blued. The top strap, front of the frame, front of the crane, trigger guard, cylinder flutes, and grip frame are matte blue.

Overall Condition: This handgun retains about 85% of its metal finish. The barrel has thinned at the muzzle. The bottom of the barrel has some little scratches and impact marks through the finish. The top of the front sight has thinned slightly. The frame has thinning on the edges, the heaviest is located on the front at the bottom and on the edges of the top strap. There are two small spots of finish loss on the left side of the frame at the front. The cylinder has thinning on the front face in addition to the edges of the flutes. Some of the edges of the flutes have heavier finish loss around them. Two of the flutes have heavy thinning and finish loss behind them. The cylinder has some small scattered scuffs, scrapes, and rubs. There is a complete turn line on the cylinder. The trigger and cylinder release have thinned on their edges. The screw heads are sharp to hardly worn with deep slots. The markings are strong and easily read. Overall, this handgun rates in about Very Good condition.

Mechanics: The action functions correctly. The single action is light and crisp and the double action is smooth. The cylinder has a solid lockup. We did not fire this handgun. As with all used firearms, a thorough cleaning may be necessary to meet your maintenance requirements.

Our Assessment: In the early ’50s, Colt realized that most customers wanted to buy a double action revolver with adjustable sights which lead to the introduction of the 357 Model and the Trooper. The Trooper was so named as it was intended to pick up law enforcement sales and to offer a less expensive option to their customers than the 357 Model which was the deluxe version of the Trooper. The 357 was originally Colts premier large caliber double action, but once the Python was introduced sales of the 357 Model dropped off. Due to the 357 being one of the premium offerings, most customers elected to purchase the Python for a similar price or simply got the Trooper for less than either the 357 or Python. In 1961, Colt made the decision to discontinue the model which had only been introduced seven years earlier. The 357 only reached about 15,000 produced, so this makes it one of the harder to find Colts. Furthermore, this is from the first year of production making it something a Colt collector needs in the safe. Made with Colt quality, it ought to make a fine target revolver, home defense gun or duty revolver, so drop a bid today! Please see our photos and good luck!