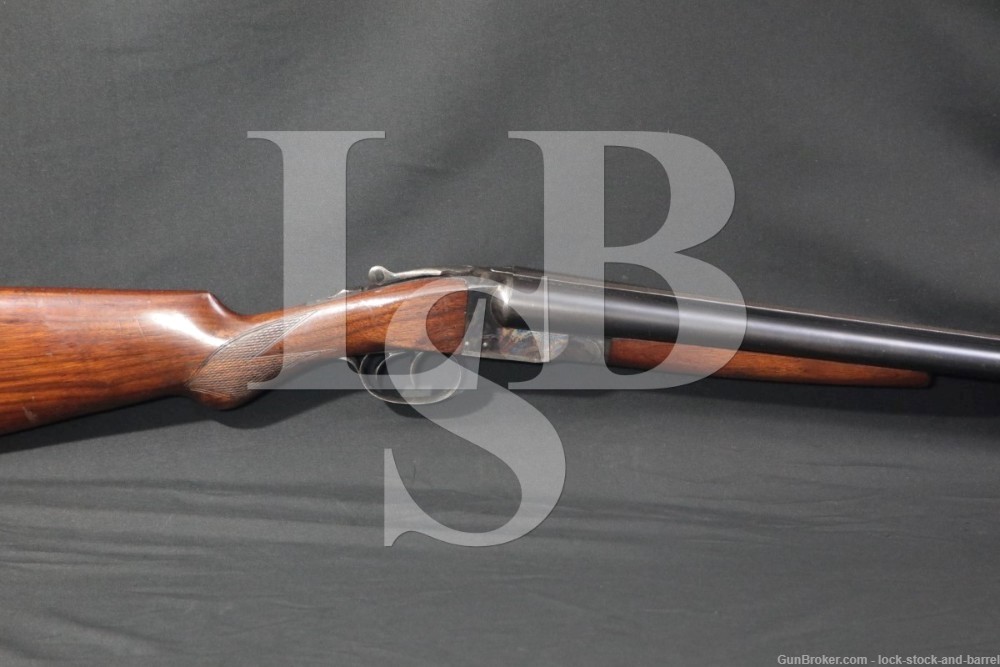 Sights / Optics: This shotgun has a brass bead fixed to the front of the rib.

Stock Configuration & Condition: The stocks are two-piece checkered walnut with a splinter forend, round-bottom half-pistol grip, straight comb, and serrated black hard rubber buttplate. The forend has some scattered light compressions, drag lines and handling wear, mostly toward the rear. The buttstock has a repaired ship loss at the toe, scratches and marring along the belly, scattered light compressions, scratches, scuffs and spots of thinning finish with a few very small chip losses at the receiver. The buttstock has very slight play to the receiver. The checkering is well defined with light-moderate handling wear. The LOP measures 14” and 13 1/8″ from the fronts of the triggers to the back of the butplate. The plate has scattered light wear, in about Very Good condition. The drop at comb is 1 1/2″ and the drop at heel is 2 5/8″. The cast is about neutral. The stocks rate in about Good-Very Good overall condition as repaired.

Type of Finish: The barrels and trigger guard are blued and the forend iron, receiver and upper tang are case colored.

Bore Condition: The bores are mostly bright. There is some extremely faint erosion just forward of the chambers and at the muzzle. There is a shallow dent in the bottom-left of the left barrel approximately 10″ from the muzzle which is barely visible in the bore.

Overall Condition: This shotgun retains about 92% of its metal finish. The finish is very lightly thinning at most edges. The barrels have some scattered light marks, some very light handling wear over the forend and a small, shallow dent on the bottom-left of the left barrel approximately 10″ from the muzzle. The case-coloring in the receiver and forend iron is strong with light wear on the edges of the fences, the bottom of the forend iron, the front of the lever and the rear of the top tang. The lever and safety have light handling wear. The trigger guard has scattered light marks and wear. The screw heads range from sharp to lightly disfigured with useable slots. The markings are clear. Overall, this shotgun rates in about Very Good-plus condition.

Mechanics: The action functions correctly. The barrels lock solidly to the frame. Its safety engages automatically upon opening. We have not fired this shotgun. As with all used firearms, a thorough cleaning may be necessary to meet your maintenance standards.

Our Assessment: The history of the L.C. Smith firearms is quite interesting. L. C. Smith formed a partnership with L. H. Smith and W.H. Baker to manufacture a three-barrel gun in 1879. L. C. Smith took over the company in 1880 and in 1884 began manufacturing hammer shotguns. Smith became interested in a new-fangled invention called the typewriter, and sold the company in 1888 to John Hunter. Smith went on to form the Smith-Corona company and became a world leader in the manufacture of typewriters.

The L. C. Smith shotguns manufactured by Hunter Arms went on to become some of the highest quality shotguns made in the United States. This is a Hunter Arms Co. Fulton model boxlock double barrel shotgun, but it is no ordinary Fulton. From Stubbendieck’s book: “The Hunter Arms Company supplied shotguns to the military during WWII for training aerial gunners. Trainees were taught how to lead targets on the skeet range. These shotguns were shipped in 1942 and 1943 in several orders to the Rochester Ordnance District, Rochester, New York, and they have become known as the “Rochester Ordnance” Smiths. The serial numbers are between 197321 and 202813. Most were stamped with the flaming bomb ordnance mark” (L.C. Smith Production Records, P114).

Hunter Arms supplied a total of 2,228 guns with the majority being Ideal and Field grade sidelock guns (1,535) with a smaller portion being Hunter Special and Fulton guns (693). Of all the Hunter shotguns sold to the U.S. Military during this time, only 111 were 30″ Fulton models like this one. While trench and riot guns are the most recognizable military shotguns, the training shotguns served perhaps a more important role, training the gunners who would protect Allied strategic bombers in the European and Pacific theaters. While bomber aircrews suffered horrific casualty rates, they undoubtedly would be worse without the training of their aerial gunners. This is an intriguing and quite uncommon piece of WWII history and would make a fantastic addition to a military firearms collection. Please see our photos and good luck!