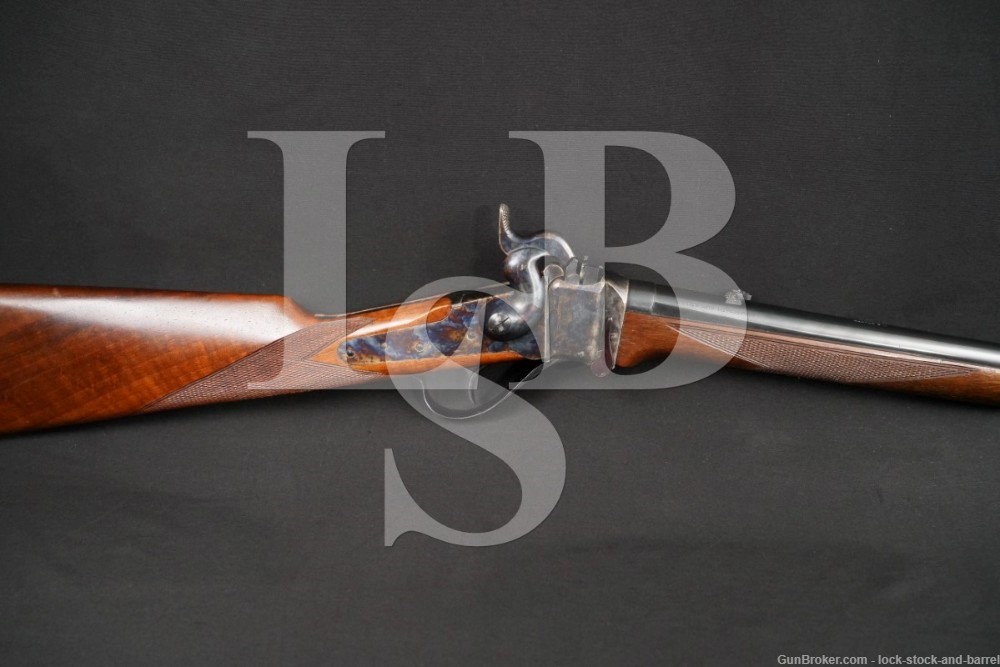 Sights/ Optics: The front sight is a beaded blade dovetailed to a base over the muzzle. The rear sight is a “U”-notch adjustable for windage and elevation dovetailed ahead of the action.

Stock Configuration & Condition/ Grip: The stock is two-piece wood featuring a checkered forend, a straight checkered wrist, a straight comb and metal butt-plate. The stock has a moderate scuff on the bottom front portion of the forend and a very light nick on the comb. There are no chips or cracks. The checkering remains mostly sharp. The LOP is 14” from the trigger to the rear end of the butt-plate. The butt-plate has some light handling marks. Overall, the stocks are in very Good condition.

Bore Condition: The bore is mostly bright with sharp rifling. There is some stubborn fouling and light erosion concentrated in the grooves.

Overall Condition: The rifle retains about 95% of its metal finish. There are some light handling marks, nicks and scuffs. The markings remain clear. The screwheads are unmarred and remain serviceable. Overall, the rifle is in Fine condition.

Our Assessment: This is an IAB Marcheno made reproduction of the famous Sharps Rifle. The story of the Sharps rifle begins with Christian Sharps, he was a weapons designer who was born in 1810. He worked at Harpers Ferry early in his career and was impressed by John H. Hall’s breech-loaded rifle (the first American breech-loader which was originally built with a flint-lock ignition system) which would inspire Sharps to develop his own breech-loader. His breech-loaded design was patented in 1848 and the first units entered production in 1850. The following year Sharps Rifle Manufacturing Company was formed, Christian Sharps served as a technical advisor to his namesake business receiving a royalty on every unit that was sold. Despite being named after him, Sharps left his namesake company in 1853 and formed a new company C. Sharps & Co. where he remained until the Civil War broke out.  In 1862, as a consequence of the Civil War, Sharps partnered with William Hankins to form Sharps & Hankins with most of the company’s production dedicated to military contracts. After the war Sharps continued to work until 1874 when he succumbed to illness.

The Sharps rifle would be put to use in Kansas during the 1850s when a series of violent clashes erupted between abolitionists and pro-slavery settlers. The rifle was popular with the abolitionists and nicknamed the “Beecher’s Bible” after prominent abolitionist Henry Ward Beecher. When the Civil War broke out both the Sharps Rifle and a carbine variant were sold to the Federal Government and issued to a number of Army and Navy units. The carbine was particularly popular, with more Sharps carbines manufactured than any other (the next two most widely manufactured were the Spencer and Burnside). They would see widespread use throughout the conflict.

This modern reproduction does not perfectly conform with an established variant of the Sharps, but it has the distinct falling block action that the weapon system was famous for. It is beautifully finished and remains mechanically sound. This is a great option that should appeal to fans of the distinct Sharps action. Good luck on your bid!