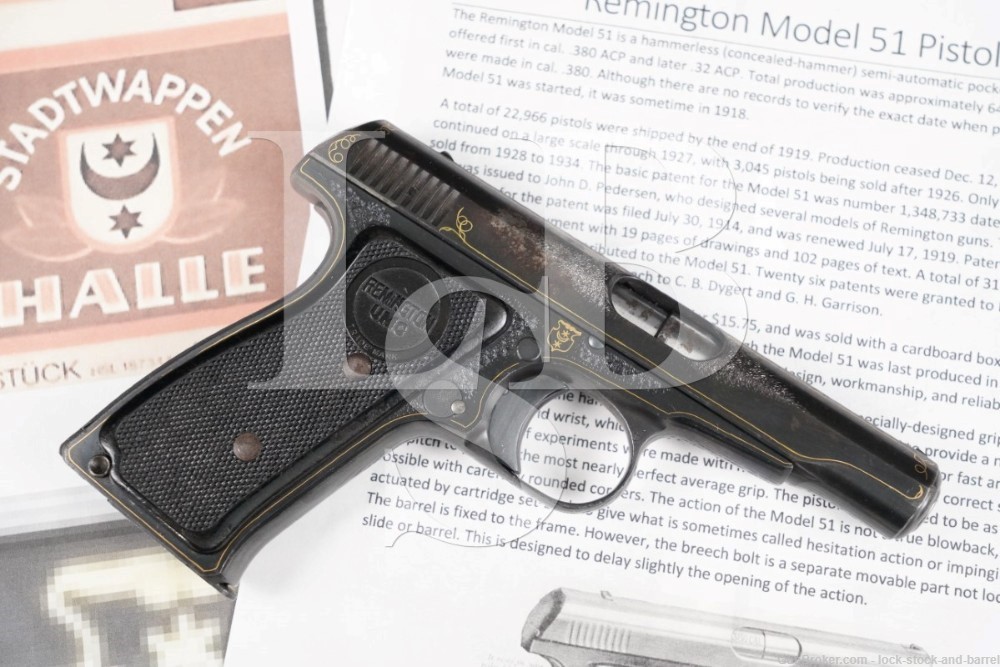 Bore Condition: The bore is semi-bright and the rifling is sharp. There is scattered surface erosion.

Overall Condition: This handgun retains about 85% of its metal finish. There are some areas of light surface erosion, faint scabbing, and discoloration from previous oxidation, the most notable is on the right side of the slide behind the ejection port. There are a few little spots of light surface erosion and surface oxidation on the grip safety. There is light finish wear on the front edges of the slide. The slide has a slightly plum hue. There is faint operational wear. The markings are clear. Overall, this handgun rates in about Very Good condition.

Box, Paperwork & Accessories: Included is a 7-round magazine and paperwork regarding the Model 51 and the city crest.

Our Assessment: This is a beautiful Remington Model 512 from the collection of Mr. Kevin Williams. Mr. Willaims is best known for his work on the topic of General Officers Pistols & Clandestine Organization Pistols of WWII. This particular pistol has the city crest of Halle, Germany which can only be used by the city. Either the pistol was engraved by an engraver from Halle or was the sidearm of a city official. The layout of the Remington 51 is similar to the Walther PPK pistol in the use of a stationary barrel and recoil spring surrounding the barrel. However, the unique feature is the use of a locking breech block within the slide. When the pistol is in battery, the breech block is held forward of the locking shoulder in the frame by the force of the recoil spring which holds the bolt face solidly against the end of the chamber. When the cartridge is fired, the bolt and slide move together a short distance rearward powered by the energy of the cartridge as in a standard blowback system. When the breech block contacts the locking shoulder, it hesitates, locking the breech. The slide continues rearward with the momentum it acquired in the initial phase forcing the hammer down and compressing the recoil spring around the barrel. This allows chamber pressure to drop to safe levels while the breech is locked and the cartridge slightly extracted. After the bullet leaves the barrel and pressure drops to a safe level, the rearward motion of the slide causes an inclined cam within the slide to lift the rear of the breech block free from its locking recess, continuing the operating cycle. One can insert a dowel into the barrel and push on the breech block. It will only move a fraction of an inch and stop against the recessed buttress. Only manually retracting the slide or firing a cartridge opens the gun. The Remington Model 51 was the only production pistol to utilize Pedersen’s type of operating system. Because the breech is locked, this pistol can handle greater pressures than a blowback firearm yet without the size and weight penalty of other locking systems. The design also allows the recoil spring to be placed around the barrel making for a shorter profile gun. Lighter operating parts and longer lock time provide less felt and actual recoil. A lower bore axis gives less muzzle rise which also lowers felt recoil. A fixed barrel allows for greater accuracy and reliability as well as simplifying construction compared to other locking systems. Overall, this system is lighter than a blowback, simpler than any conventional locking mechanism, and has less recoil than either of the other systems. This one looks great with the engraving and is truly a looker. This is a fantastic find for a Remington collector. Please see our pictures and good luck!