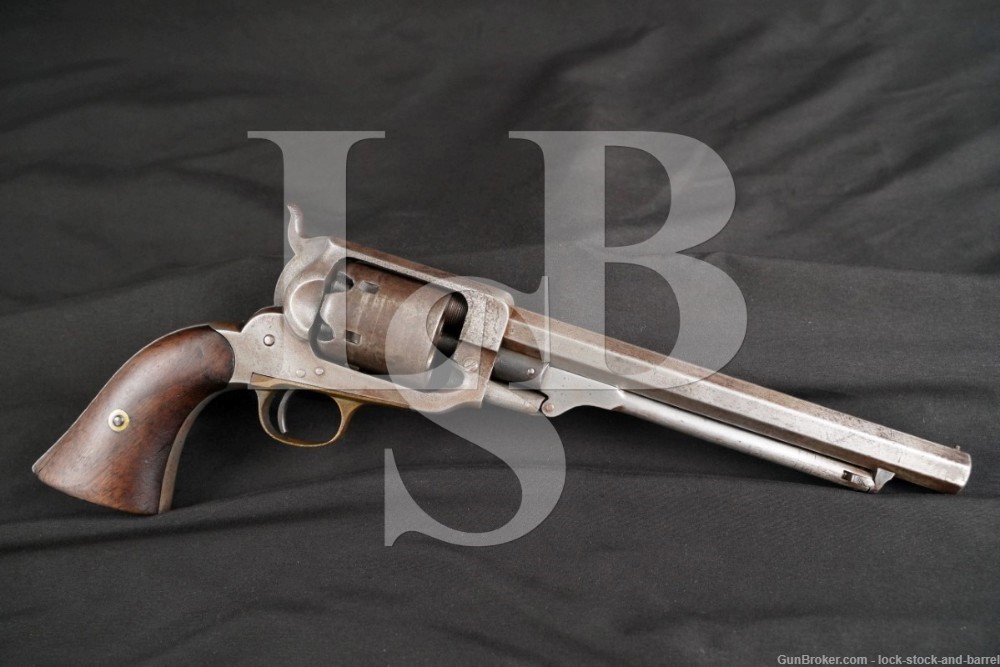 Sights/ Optics: The front sight is a brass bead fixed by the muzzle. The rear sight is a “V”-notch integral to the top-tang.

Stock Configuration & Condition/ Grip: The grip panels are two-piece wood. The grips have some light handling marks, nicks and compressions. Notably, there is a light ding on the left panel slightly ahead of the screw and a light crack at the bottom rear portion of the right panel. Overall, the grips are in Very good condition for Antiques.

Bore Condition: The bore is grey with sharp rifling. There is light erosion in the bore.

Overall Condition: The revolver retains about 1% of its metal finish. The brass trigger guard is heavily tarnished and coated in light surface oxidation. The blue finish has worn off and the gun is now in the white. There are scattered patches of light surface oxidation in addition to some light handling marks, nicks and scuffs on the frame, cylinder and barrel. The loading lever is also now in the white and has some light surface oxidation and light handling wear. The cylinder engraving is no longer visible but the remaining markings are clear. The screwheads have tool-marks but they remain serviceable. Overall, the revolver is in Very Good condition.

Mechanics: The timing is off on two of the chambers but otherwise the action functions correctly. The trigger is crisp. The cylinder locks with only barely palpable play on each chamber. We have not fired this revolver. As with all used firearms, a thorough cleaning may be necessary to meet your maintenance requirements.

This particular specimen is a Whitney Navy & Eagle Co. Percussion Revolver which falls into the category of the Second Model and Fourth Type. The gun entered production in the late 1850s and was discontinued in the late 1860s. The gun was among the first generation of practical solid frame revolvers, it was an early competitor to Colt which had just lost its Master patent in 1857 which had allowed Samuel Colt to dominate the revolver market. Although not nearly as well known as the Colt and Remington revolvers that were used prolifically during the Civil War, the Whitney Navy & Eagle Co. Revolver was pressed into service during the conflict and they were effective in the field. This particular specimen has no visible government acceptance marks, so there is no way to know for sure if it was employed during the conflict. The cylinder engraving has worn off, but otherwise the gun is nicely preserved and aside from a minor issue with the cylinder’s timing the revolver remains mechanically sound. This is a great option for fans of Civil War-era relics and historical firearms. Good luck on your bid!