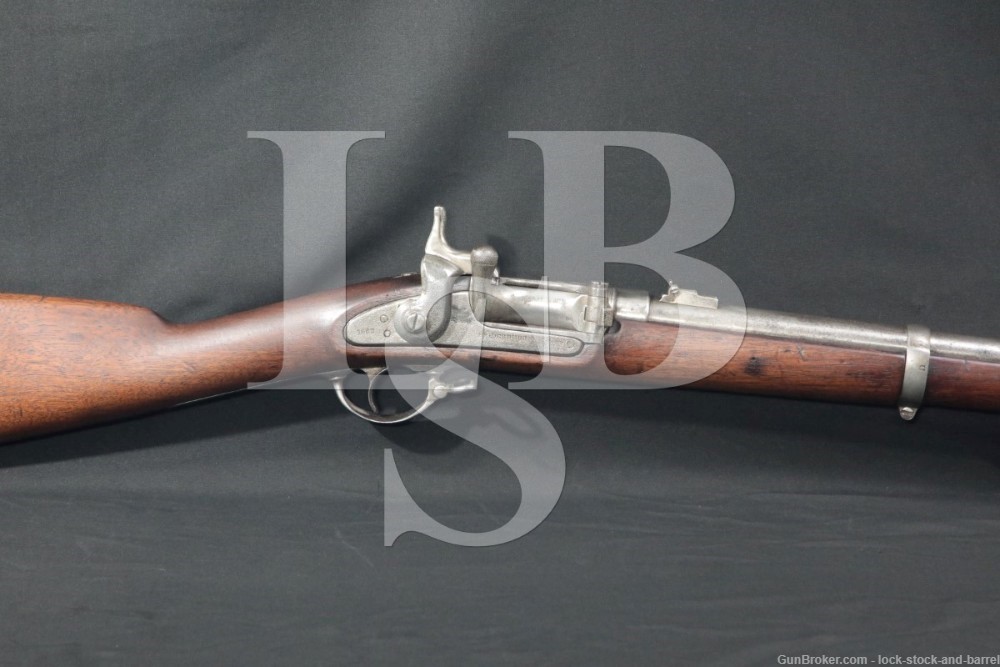 Year of Manufacture: 1862 and converted around 1869, Antique

Markings: The lock is marked “1862” behind the hammer, features a Great Seal of the United States ahead of the hammer and is marked “BRIDESBURG”. The butt-plate is marked “US”.

Sights/ Optics: The front sight is a blade fixed by the muzzle. The rear sight features three “V”-notches with the smallest notch marked “1”, the center notch has a faded “3” and the largest notch is marked “5”.

Stock Configuration & Condition/ Grip: The wood stock features a forend with a slot for the included cleaning rod, a total of three barrel bands (the center barrel band has a fixed sling swivel), the lock which is situated on the right side of the stock, a straight wrist, a sling swivel fixed to the front of the trigger guard, a straight comb and metal semi-crescent butt-plate. The stock has a few light handling marks, nicks and compressions. Notably, there is a light compression just ahead of the action, a light ding on the left side of the heel and a light patch of compressions on the belly. There are no chips or cracks. The LOP is 13.5” from the trigger to the rear end of the butt-plate. The butt-plate has some light handling marks and some patches of light surface oxidation. Overall, the stock is in Fine condition for an Antique.

Overall Condition: The rifle has no metal finish. The gun has scattered patches of light surface oxidation but it still remains mostly bright. The lock-plate, external portion of the breechblock and most of the hammer are coated in light pitting. There are also some light handling marks, nicks and scuffs on the gun. The markings remain clear. The screwheads have some light tool-marks and remain serviceable. Overall, the rifle is in Fine condition for an Antique.

Box Paperwork and Accessories: There is a cleaning rod included with the rifle.

Our Assessment: John O’Mahony was an Irish nationalist who was forced into exile following the failed Young Irelander Rebellion of 1848. He eventually made his way to the United States which had a thriving Irish diaspora. It did not take long before he began to work with other exiled Irish nationalists, and in 1855 he helped create the Fenian Brotherhood. When the Civil War broke out O’Mahony and most American based members of the Irish diaspora took up arms during the conflict. O’Mahony, who was a colonel in the New York State Militia and helped recruit Irishmen into various Northern military formations. When the war ended, there was a significant number of military trained Irishmen and the exiled nationalists planned to take action.

The Fenian Brotherhood organized a series of raids into Canada in 1866, several hundred Irishmen armed with Civil-War surplus muskets attempted to seize a number of British military outposts on the border of the United States and Canada. The goal of this adventurism was to pressure the British to withdraw from Ireland, but the raids were a failure. Interestingly, when the Fenians fled back to the United States in spite of being briefly detained they had their confiscated weapons returned to them. Following this failure, the Fenian Brotherhood decided to upgrade their arsenal, they ended up adopting the J. & G. Needham breech-loading system for their Civil War muskets (which was ironically the brainchild of English inventors). The Fenian’s muskets were converted in New Jersey (the Bridesburg lock marking indicates where the gun’s lock had been made before it was converted, Bridesburg has no connection to the rifle’s new action) around 1869, and in 1870 about 200 Irishmen again attempted a raid on Canada. The raid failed, but it prompted the British to confederate all the provinces of Canada in order to better protect the territory from incursions. In hindsight the raids appear to have been of little consequence, but the British clearly felt they posed a serious threat to their empire. Unlike the prior incident, the Finians did not have their breechloaders returned by the US authorities, and the unorthodox guns were ultimately sold on the commercial market. O’Mahony is not believed to have personally participated in these raids, but he was certainly involved in their planning and coordination. He would spend the rest of his life in relative poverty and when O’Mahony passed in 1877 his remains were returned to Ireland.

This particular Needham Rifle remains extremely well preserved with a fully functional action and its markings remain clear. The gun is fascinating, it is certainly one of the more unorthodox conversions of a muzzle-loader into a breech loader. This is a wonderful option for fans of historical firearms. Good luck on your bid!