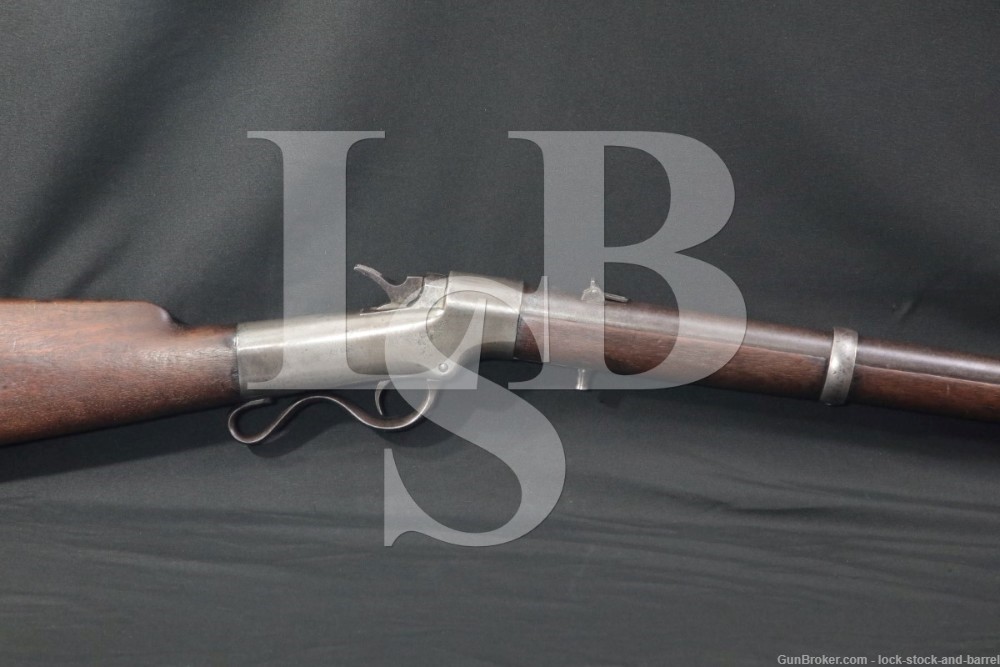 Stock Configuration & Condition/ Grip: The stocks are two-piece wood featuring a forend with three barrel bands (the center band has a sling swivel at the bottom), a manual extractor knob at the bottom of the forend which is just forward of the receiver, a straight wrist with finger grooves integral to the lever, a straight comb, a sling swivel fixed to the belly and a metal butt-plate. The stocks have light-moderate handling marks, nicks and scuffs. Notably, there is a ding around the screw on the bottom of the forend with a light crack that extends slightly ahead and behind it. Also, there is a light ding on the right side of the heel and some wear surrounding the tip of the butt-plate’s top-tang. The LOP is 14” from the trigger to the rear end of the butt-plate. The butt-plate is coated in scattered light surface oxidation and has some light handling marks. Overall, the stocks are in Very Good condition for Antiques.

Bore Condition: The bore is semi-bright with mostly sharp rifling. There is light erosion concentrated in the grooves and light-moderate pitting concentrated around the muzzle.

Overall Condition: The rifle retains about 2% of its metal finish. There is some surviving bluing but most of the rifle is now in the white, the gun is coated in light surface oxidtaion and has taken a patina color. There are scattered light handling marks, nicks and scuffs. There is a faded mark on the top of the barrel ahead of the rear sight but the rest of the markings remain clear. The screwheads have light tool-marks but they remain serviceable. Overall, the carbine is in Very Good condition for an Antique.

Mechanics: The action functions correctly. To load the rifle, the lever is pulled to lower the breechblock and then after a cartridge has been loaded the lever is pulled back to its original position to return the breech to its original position. To fire the rifle the hammer is fully cocked and trigger depressed. To eject a spent casing, the breechblock is lowered again and the manual extractor knob is pulled to remove the casing. Please note, the hammer can not be fully cocked when lowering the breechblock. We have not fired this rifle. As with all previously owned firearms, a thorough cleaning may be necessary to meet your maintenance standards

Our Assessment: This is a Brown Mfg. Co. Ballard Carbine which was manufactured between 1869-1873. The original design for the Ballard Carbine was patented by Massachusetts based inventor Charles H. Ballard in late 1861 and production of the famed guns began the following year. They were famously used by the Kentucky Cavalry during some of the most brutal fighting of the Civil-War. In another instance, a number of the carbines were issued to the Vermont State Militia in order to battle a band of escaped Confederate prisoners who were based in Canada. Sporting variants of the Ballard would survive the end of the Civil War, and while several small manufacturers made variants of the gun into the 1870s, J.M. Marlin Firearms Co. continued to manufacture civilian variants of the design until around 1890.

This particular Ball Carbine appears to be a commercial variant that was made after the Civil War by Brown Manufacturing Co. and features the distinct dual-ignition style action. The hammer features a swivel striker which allows the user to fire both rimfire cartridges and percussion caps (the percussion caps can be installed on a nipple which is mounted on the breechblock). The gun’s finish has largely worn off but otherwise it remains aesthetically pleasing and mechanically sound. This is a great option for fans of historical firearms. Good luck on your bid!