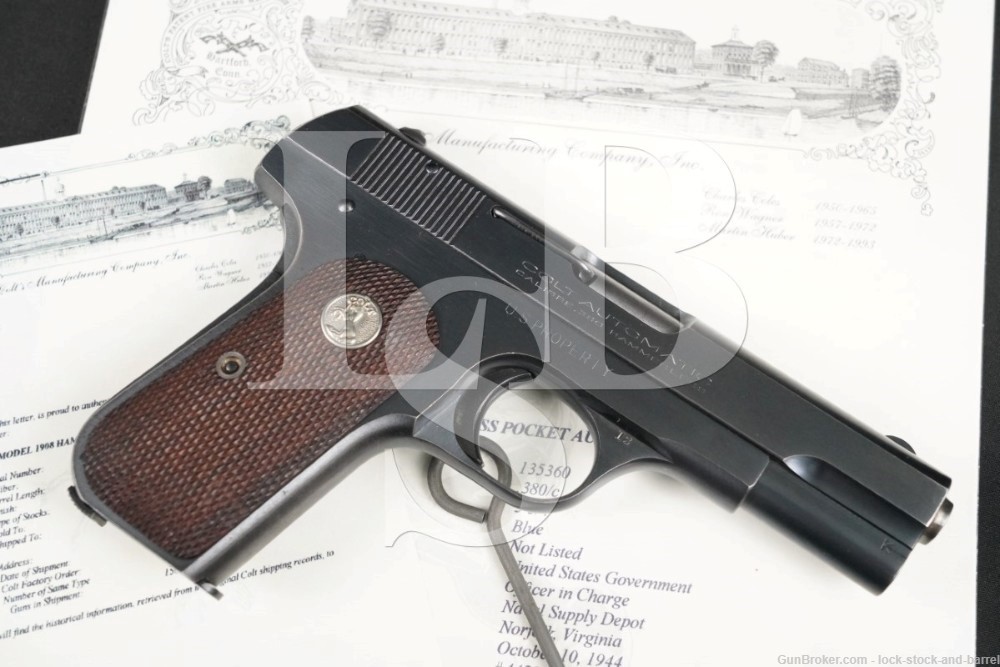 Stock Configuration and Condition: The grips are checkered walnut with silver-colored rampant colt medallions. The grips show minor handling wear with a few light nicks and scuffs. The checkering is well defined. There are no chips or cracks. Overall the grips are in Fine-Excellent condition.

Finish Originality: This pistol was returned to Colt for re-work and Colt may have refinished the pistol at that time. Some marking imperfections would be explained by worn dies, but some markings have crisp, raised edges. Please see Our Assessment.

Bore Condition: The bore is mostly bright with sharp rifling. There is no erosion in the bore, but there is some stubborn fouling which should come out with a patient cleaning.

Overall Condition: This handgun retains about 96% of its metal finish. The finish is thinning at most edges. The grip areas show minor handling wear. There are some scattered minor marks and infrequent spots of very minor surface oxidation. There is one more notable scratch on the left of the frame behind the trigger. The screw head is tool marked with a strong slot. The markings are generally clear, the Ordnance wheel is poorly struck. Overall, this pistol is in Fine condition.

Box, Paperwork, and Accessories: This pistol comes in a two-piece cardboard craft box, Colt Archive letter, and one two-tone 7-round magazine. The magazine has minor operational wear, intact feed lips and a strong spring. Its floorplate is marked “M” and “CAL .380 / COLT”. The letter confirms that this pistol shipped October 10, 1944 to the Naval Supply Depot in Norfolk, Virginia as one of 150 guns of the same type in the shipment. There is additional correspondence between authors Kevin Williams and John W. Brunner regarding the pistol’s markings.

This example is one that was made for a purchase by the United States government, confirmed by the included Colt letter. The pistol comes from the collection of author Kevin Williams, best known for his exceptional work on the topic of General Officers Pistols & Clandestine Organization Pistols of WWII, so it should come as no surprise that there are a couple of interesting idiosyncracies. Mr. Williams corresponded with John W. Brunner, who is notable for his works on weapons of the OSS as well as works specifically about Colt’s Pocket Hammerless pistols. According to their correspondence, the pistol originally shipped with the punch-dot acceptance mark, but was returned to the Colt factory for a re-work, at which time it received the Ordnance wheel marking to indicate approval after the re-work. At the time of the re-work, the pistol also had an “M” prefix applied to the frame’s serial marking, likely this was also when the “M” marking was applied to the magazine floorplate.

Given this pistol’s purchase by the US Navy during WWII, its interesting markings, documentation, and coming from the collection of Kevin Williams, this 1908 Pocket Hammerless will take a prized place in even advanced collections. Please see our photos and good luck!