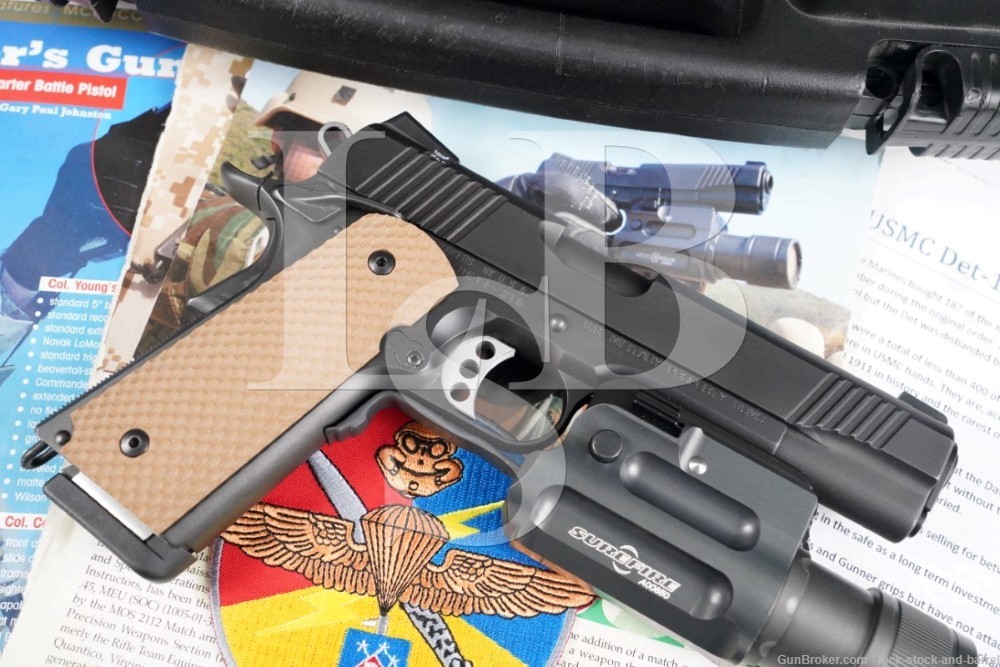 Sights / Optics: The front sight is a Trijicon blade with a serrated rear face and tritium lamp, it is dovetailed to the front of the slide. The rear sight is a Novaks square-notch lo-mount sight with two Trijicon tritium lamps; it is dovetailed to the rear of the slide and also has a set screw. The lamps have dimmed slightly but are still visible in low/no light conditions. Installed on the rail is a Surefire IMPL light.

Stock Configuration & Condition: The grips are two-piece textured tan G10 panels. There are no major defects and the texturing is sharp. Overall, the grips rate in about Excellent condition.

Bore Condition: The bore is bright and the rifling is sharp. There are a few areas of light surface erosion.

Overall Condition: This gun retains about 98% of its metal finish. There is some finish wear on the edges. There are a few marks on the left edge of the grip safety. Thre is some light operational wear. The grip screw sockets are strong. The markings are clear. Overall, this pistol rates in Excellent condition.

Mechanics: The action functions correctly. The slide to frame fit is snug. There is NO series ’80 safety. The trigger is crisp. As with all used firearms, a thorough cleaning may be necessary to meet your standards.

Box & Accessories: Included is a Surefire IMPL light, Kimber box with no label, an 8-round magazine, Marine Corps Special Operations Command Detachment One patch, and magazine articles on the pistol

Our Assessment: For 40 years, Kimber has been producing some of the finest 1911-style pistols in America and some have been selected for use with some of the best military and law enforcement units around. In 2003, about 90 years after the 1911 was first adopted by U.S. Armed Forces, the Marine Corps Special Operations Command Detachment One, simply referred to as DET 1, wanted a new CQB 1911. The option at the time was the MEU .45 which was in the supply chain. The pistols were sitting in storage sites all over the country and the best would be selected and sent to Quantico where match armorers at the precision weapons section rebuilt them from the ground up with top tier parts. There were issues, the armorers could only produce 60 a year and if they broke down they needed to be worked on by a match armorer, something that is not always possible in the exotic locations they would see use in. The MEU could only withstand 10,000 rounds before an overhaul was needed…DET 1 Marines put over 10,000 rounds down range in training along. The MEU was not the choice and the unit used its broad purchase authority for a new contract pistol. At the time, the LAPD SWAT had just selected a 1911, a Kimber based on the Custom II model. LAPD SWAT and DET 1 members often crossed paths at Camp Pendleton where the SWAT team often conducted training, the DET1 members had plenty of opportunities to test the Kimber and liked what they saw. Kimber was soon tasked with building a pistol to DET1 specifications, there were many features it required and a few were as follows: throated 5″ barrel, standard recoil guide & plug, Novak lo-mount tritium sights, beavertail grip safety, no firing pin safety, lanyard loop, accessory rail, life expectancy of 30,000 rounds, and U.S. Property markings. The pistols were produced and 347 were made (Meadows). 110 were purchased by the Marine Corps and the rest were sold privately to members of the DET1 when the unit was de-activated in 2006 and succeeded by MARSOC. This is a rare 1911 indeed and it looks great, according to Ken Hackathorn and Larry Vickers, it is the only USMC marked 1911 in history and the rarest of the USGI 1911s. This one comes from the collection of author Kevin Williams, best known for his exceptional work on the topic of General Officers Pistols & Clandestine Organization Pistols of WWII. This will make a great addition to an advanced collection of 1911s or U.S. Martial arms. Please see our photos and good luck!