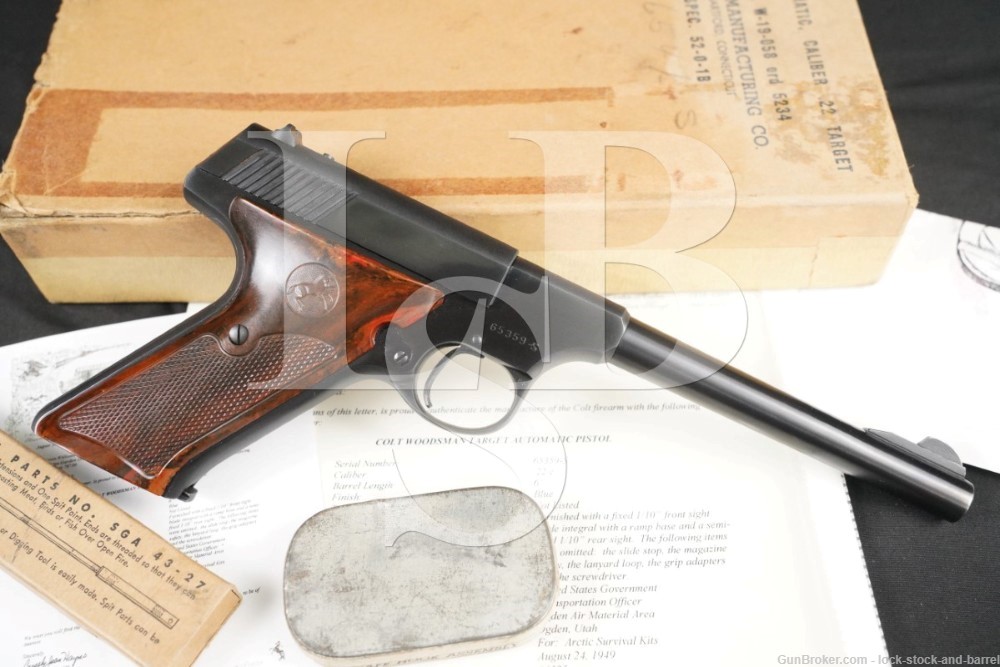 Sights / Optics: The front sight is a 1/10″ blade integral to a serrated, ramped base fixed to the front of the barrel. The rear sight is a “semi-fixed” square notch dovetailed to the rear of the slide.

Stock Configuration & Condition: The grips are two-piece checkered brown synthetic panels. The left panel has a thumb-shelf (for a right-handed shooter) and there is a rampant colt in circle at the top of the right panel. Unlike the standard 2nd Series Woodsman pistols, those ordered for the USAF did not have provision for grip adapters in the backstrap. The grips have a few scattered minor marks, but no notable damage. The checkering and serrations are well defined. There are no chips or cracks. Overall, the grips are in Fine-Excellent condition.

Overall Condition: This pistol retains about 98% of its metal finish. The finish is lightly thinning at a few edges. There is a spot of wear on the top-rear of the barrel. The action shows minor operational wear. There are a few other scattered minor marks. The screw heads are sharp. The markings are clear. Overall, this pistol is in Excellent condition.

Box, Paperwork & Accessories: This pistol comes with a non-matching Arctic Survival shipping carton, spit and gaff hook assemblies in original packaging with instructions, and with a single 10-round magazine. Also included is a Colt Archives letter confirming that this pistol shipped in its current configuration on August 24, 1949 to the Ogden Air Material Area in Ogden, Utah for use in Arctic Survival Kits as one of 925 guns of the same type in the shipment.

Our Assessment: This is a Colt Woodsman 2nd Series pistol, made in 1949. Unlike the 1st and 3rd Series, the 2nd Series pistols have a push-button magazine release that is more familiar to many pistol shooters, today. John M. Browning designed “Colt’s Automatic Pistol, Caliber .22”, later to become the Woodsman, with the design refined slightly by Colt employees George Tansley and F.C. Chadwick before it was released in 1915 and the Woodsman stayed in production until 1977. While the pistols were immensely popular on the commercial market, they also saw use in a niche military role.

The Woodsman was selected by the United States Air Force for their pilot’s Arctic Survival Kits. Only 950 of these pistols were made with 925 delivered in the same shipment with this pistol to the Ogden Air Material Area and an additional 25 shipped to Springfield for further testing and inspection. The pistols made for the USAF had some special-ordered features (or lack thereof). The pistols were ordered with 6″ barrels, but had fixed sights instead of the standard adjustable target sights. The pistols were not equipped with a slide stop, magazine disconnect, lanyard loop or provision for grip adaptors in the backstrap.

As one of the 950 pistols produced for the Air Force contract, this 2nd Series is sure to attract the Colt collectors. It not only includes an original shipping carton (though not matching), spit and gaff hook assemblies, it also comes from the collection of author Kevin Williams, best known for his exceptional work on the topic of General Officers Pistols & Clandestine Organization Pistols of WWII. This is a scarce opportunity for collectors of Colt and U.S. Military pistols and will add to even advanced collections. Please see our photos and good luck!