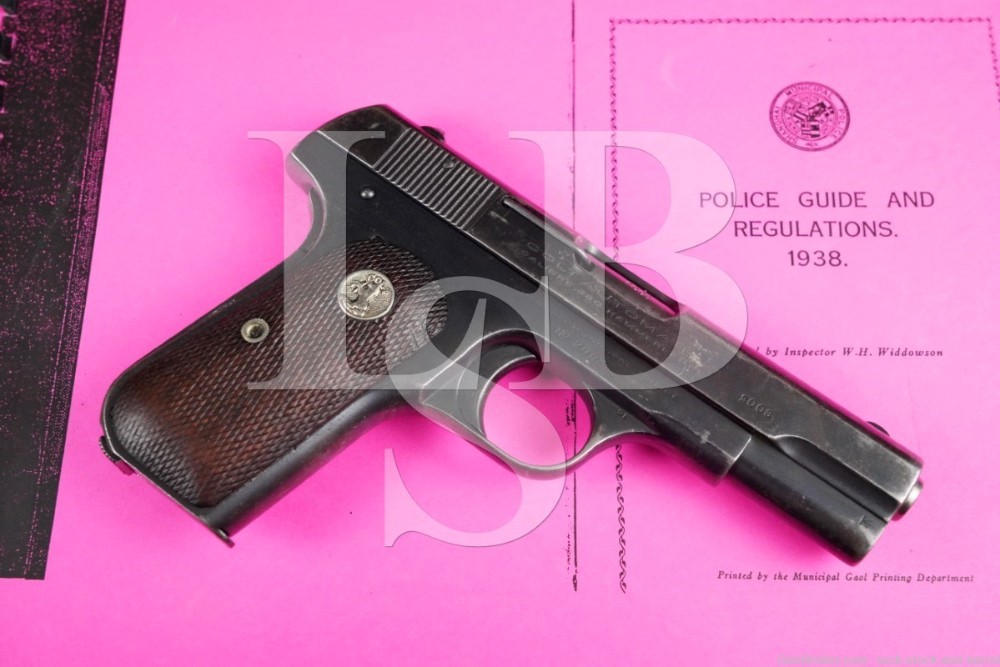 Stock Configuration & Condition: The grips are checkered walnut with silver-colored Colt medallions. The grips have light-moderate handling wear with a few nicks and scratches. The wood shows some scattered discoloration. The checkering shows handling wear but is generally well defined with a few spots worn nearly smooth. There no chips or cracks. Overall, the grips are in Good-Very Good condition.

Bore Condition: The bore is semi-bright with sharp rifling. There is some scattered light erosion and infrequent minor pitting, mostly toward the muzzle-end.

Overall Condition: This handgun retains about 80% of its current metal finish. The finish is thinning at all edges. The slide and frame have scattered light finish wear with some worn areas showing discoloration from oxidation, most notable in the grip straps. There are several scattered light scratches, nicks and scuffs. There some scattered minor surface erosion with more moderate-heavy erosion and pitting under the grip panels. The screw heads are tool marked with strong slots. The markings range from clear to worn and incomplete. Overall, this pistol is in about Good-Very Good condition as refinished.

Mechanics: The action functions correctly. The slide has little play to the frame. This pistol has a grip safety and a thumb safety on the left of the frame. There is a threaded hole at the thumb safety for a pin which prevents the safety from being engaged, a modification made for the Shanghai Municipal Police. The magazine disconnect was also disabled for the SMP. We did not fire this handgun. As with all used firearms, a thorough cleaning may be necessary to meet your maintenance standards.

Box, Paperwork & Accessories: This pistol comes with one blued 7 round magazine. The floorplate is marked “CAL 380 / COLT” and there are witness holes along the spine and at the left-front (see Our Assessment). The magazine has scattered light freckling with light operational wear, intact feed lips and a strong spring. A bound printout of the 1938 Shanghai Municipal Police Guide and Regulations is also included.

Our Assessment: Colt’s Pocket Hammerless pistols were some of the finest automatics of the early 20th century, seeing use in America by civilians, police, and by the military as General Officer’s pistols. They also saw use abroad, and this is one of the more notable examples. Colt shipped a total of 4185 pistols to the Shanghai Municipal Police (SMP) from 1928 to 1938. The pistols were modified from the standard commercial M1908 in several ways: The grips were relieved for access to a staple shaped lanyard ring at the left bottom rear of the grip, a screw was added on the left side of the frame to prevent the safety from being inadvertently engaged, the magazine disconnect was removed and some had a key shaped leaf spring was added on the left side of the slide.

The magazine disconnect was removed and the safety block was installed at the behest of William Fairbairn, who was the head of the SMPD at the time. Fairbairn drew on his considerable combat experience and felt that the factory safety was too small and difficult to operate reliably under stress, so his officers carried their pistols with the chamber empty and would operate the slide if they needed to fire. There are a few explanations for the spring-tab, from preventing jams to increasing accuracy, though this example has not been modified with this spring, which may indicate that it was an iterative development or that some pistols were simply found not to need the modification. Similarly, there are multiple explanations for the unique witness holes on the magazine, perhaps the most plausible being that officers had been known to trade off ammunition, replacing it in their magazines with fired cases so that they appeared loaded when turned in at the end of their shift. The placement of the witness holes on this magazine allows inspection of the primer and bullet for each round in the magazine.

This example is in about Good-Very Good condition with some pitting under the grips, and wear consistent with a police-issued pistol in one of the most dangerous cities of the 1930s. That said, it also has a decent bore and still functions quite well. As there were only 4,185 of these pistols shipped from the Colt factory under contract to the SMP, this pistol is a rare find for the Colt auto collector. This one is a little bit more special, not only for the included copy of the SMP Police Guide and Regulations, but also because it comes from the collection of author Kevin Williams, best known for his exceptional work on the topic of General Officers Pistols & Clandestine Organization Pistols of WWII. Please see our photos and good luck!