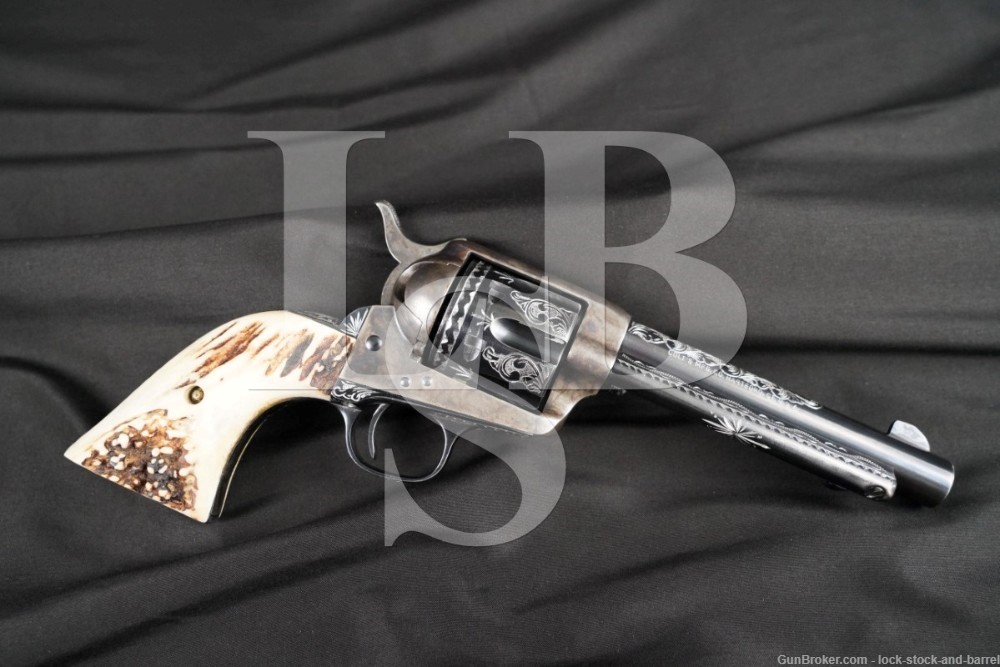 Year of Manufacture: The frame was made in 1893 (https://www.colt.com/serial-lookup), the revolver was most likely altered in the 1950s when conversion to .38 Special became possible and popular.

Caliber: .38 Special (note: this revolver has a black powder frame and may not be safe to fire with standard smokeless cartridges)

Stock Configuration & Condition: The grips are two-piece Eagle Grips stag panels. The grips have no notable wear or damage, only light handling marks. There are no chips or cracks. Overall, the grips are in Excellent condition as not original to the gun.

Finish Originality: Refinished. The barrel, cylinder, and likely other small parts are not original to the frame.

Overall Condition: Discounting the engraving, which was cut through the finish, this handgun retains about 90% of its current metal finish. The frame retains most of its case color, slightly muted with some scattered minor erosion under the finish, mostly on the inside around the cylinder. The barrel has finish wear on the left at the muzzle and a little along the side, there is similar wear on the front of the ejector housing. The grips areas have light handling wear and infrequent minor surface oxidation. The action shows operational wear including light turn-wear on the cylinder. There are a few scattered minor nicks and scratches. The screw heads range from sharp to lightly tool marked with strong slots. The remaining markings range from clear to worn and incomplete. The patent markings on the left of the frame have been removed, entirely. Overall, this revolver is in Fine condition as customized Antique.

Mechanics: The action functions correctly and quite smoothly. At the least, the mainspring has been filed down, resulting in a light hammer pull. The trigger is crisp. The cylinder has very little rotational play when locked and has a little end-shake. The trigger is light and crisp. We did not fire this revolver. As with all used firearms, a thorough cleaning may be necessary to meet your maintenance standards.

Our Assessment: Colt’s Single Action Army is, perhaps more than any other, an iconic American pistol. It was the U.S. issue sidearm for the last two decades of the 19th century, used by pioneers, outlaws and lawmen across the expanding nation, and captivated audiences on the silver screen and television (and still does, today). This example has been custom-built on a “black-powder” frame made in 1893. The frame has this designation by collectors as it was made before the SAA frames were specifically designed and made with materials which would put up with the use of smokeless powder. Nonetheless, someone updated the revolver with a .38 Special barrel and cylinder, likely in the 1950s when such upgrades were popular. The revolver looks great for its age, not only because of the new finish but also because it has been custom engraved and equipped with a set of stag grips. The result is a revolver which is interesting and unique. This revolver’s great bore and strong mechanics should make for a fun shooter with black powder .38 Special loads, and it’s a real looker, too! Please see our photos and good luck!