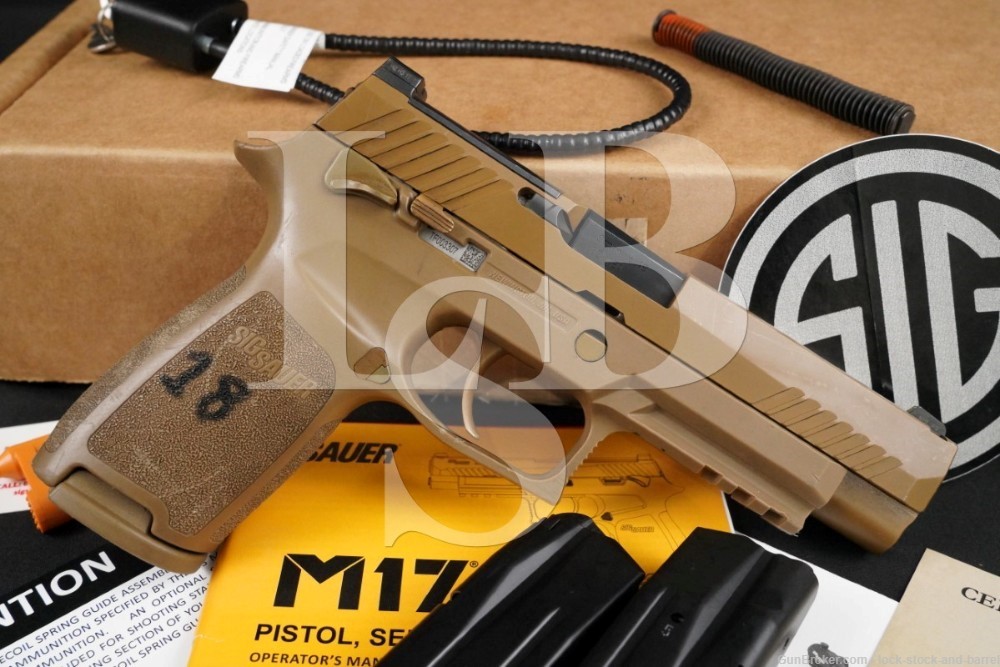 Sights/ Optics: The sights are a night-sight set. The front sight is a blade with a single lamp, dovetailed to the front of the slide. The rear sight is a square notch with two lamps mounted to a plate on the rear of the slide. The plate can be removed for mounting a reflex sight (none present).

Stock Configuration & Condition/ Grip: The grip is one-piece Coyote Tan polymer with a textured grip area, serrations on the front of the trigger guard, and integral picatinny rail on the dust cover for mounting accessories (none present). The grip shows light handling wear with some scattered light scuffs and scratches. There is some light-colored residue in the backstrap. There are no chips or cracks. Overall, the grip is in Very Good-Fine condition.

Overall Condition: The pistol retains about 95% of its metal finish. There are some scattered light nicks, scuffs and scratches, most not through the finish. The most notable finish wear is on the top of the optics plate and operational wear on the barrel. There is some light handling wear on the controls. The markings are clear. Overall, this pistol is in Very Good-Fine condition.

Mechanics: The action functions correctly. The slide to frame fit has minor play. We did not fire this pistol. As with all previously owned firearms, a thorough cleaning may be necessary to meet your maintenance standards.

-Assortment of factory paperwork including manual and certificate of eligibility.

Our Assessment: As had previously occurred with the venerable 1911A1, the Beretta M9 which replaced it saw extensive use and abuse. By 2008, some Berettas in inventory were nearing the end of their service lives and the United States began looking for a replacement. Thus began the Modular Handgun System competition. The MHS was to be truly modular, with a picatinny rail for accessories, ability to alter the grip to fit different hands, multiple magazine options, ability to mount a suppressor, and ambidextrous controls.

This example, according to the included Certificate of Authenticity, was issued and fielded during the initial domestic and in-theatre deployment of the MHS Program and manufactured for the U.S. Army. The pistol shows signs of use, but is still in Very Good-Fine condition with a great bore and strong mechanics. This is a great opportunity for fans of Sig Sauer and collectors of U.S. Military small arms. There’s no telling when or if the M17 pistols will be surplused to the commercial market again. Even better, this one comes from the collection of author Kevin Williams, best known for his exceptional work on the topic of General Officers Pistols & Clandestine Organization Pistols of WWII. Please see our photos and good luck!