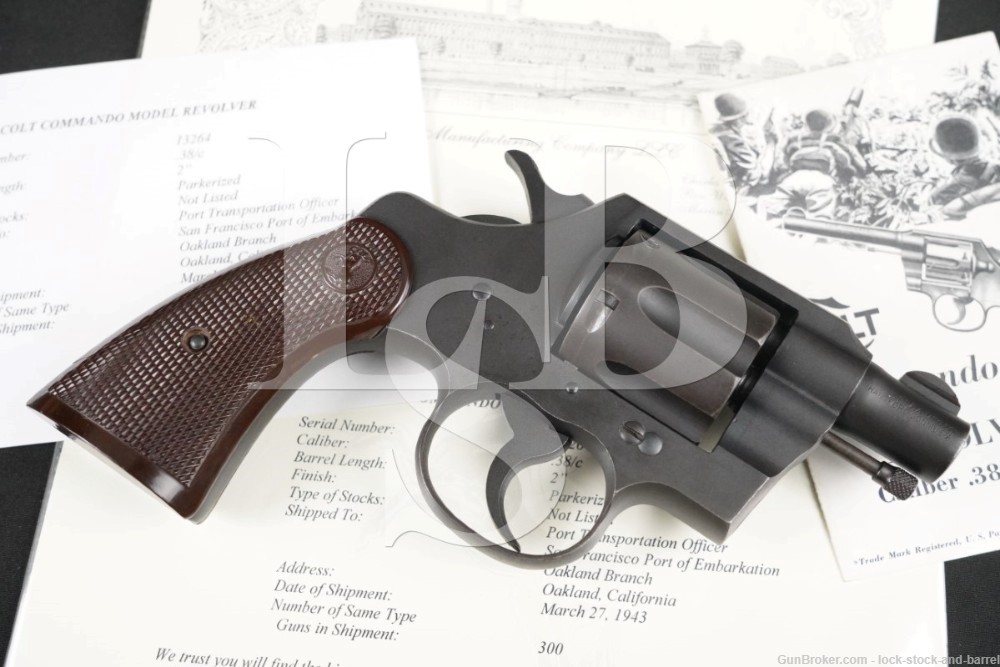 Year of Manufacture: According to Colt’s serial lookup, the pistol was produced in 1942 (https://www.colt.com/serial-lookup), shipped March 27, 1943.

Markings: The left side of the barrel is marked “COLT COMMANDO / 38 SPECIAL”. The right side of the barrel is marked “COLT’S PT. F. A. MFG. CO. / HARTFORD, CONN. U. S. A.”. The left-front of the trigger guard is marked “VP” in an inverted triangle, the left-rear is marked with “Y”. The crane and crane cut are each marked with the serial number, “13264”. The crane cut is also marked “T” and “E”. There is a flaming bomb Ordnance mark on the left of the frame above the sideplate.

Sights/Optics: The front sight is a rounded blade fixed to the front of the barrel. The rear sight is a square notch integral to the topstrap.

Stock Configuration and Condition: The grips are two-piece checkered Coltwood with molded Colt medallions and smooth borders. Each panel has a few light nicks and scratches in the smooth borders, most notable on their bottom faces. There are no chips or cracks. The checkering is well-defined. Overall, the grips rate in Fine condition.

Finish Originality: The condition of the finish and markings would otherwise indicate that the finish is Original. The frame has what appears to be erosion under the finish which would indicate refinishing. It is possible that these are from forging imperfections and we suspect this is the case due to the notable wheel marks in this area of the frame. Please see our photos.

Bore Condition: The bore is mostly bright and the rifling is well-defined. There is minor erosion in the bore.

Overall Condition: This handgun retains about 90% of its metal finish. The finish is thinning at some edges. There is some light wear and discoloration, most notable on the outside of the cylinder and on the cylinder latch. The flutes have strong finish. There is minor handling wear in the grip areas. As noted above, there are imperfections in the surface of the frame on the right side which appear to be erosion under the finish or simply forging pores. The action shows minor operational wear including a thin, light turn-line on the cylinder. The screw heads are sharp. The markings are clear. Overall, this revolver is in Very Good condition.

Mechanics: The action functions correctly. The cylinder locks up with no play on any chamber when the trigger is depressed. The double-action trigger is smooth, and the single action is crisp. We did not fire this revolver. As with all used firearms, thorough cleaning may be necessary to meet your maintenance requirements.

Box, Paperwork, and Accessories: This Commando Revolver comes in a two-piece cardboard craft box with Colt Commando parts list and a Colt Archives letter. The letter confirms that this revolver shipped March 27, 1943 in its current configuration to the Port Transportation Officer at the San Francisco Port of Embarkation Oakland Branch in Oakland, California as one of 300 guns of the same type in the shipment.

Our Assessment: As the United States entered World War II, demand for all things military strained even the massive industrial capacity of America. Frontline arms were prioritized for frontline units, but there was also a need to arm law enforcement, guards at factories, and other sites with strategic importance, such the Maritime Commission and various other non-combat roles which still required arms. To help fill this demand, Colt produced a variation of their Official Police revolver with specifications set by the US Government. The result was the Commando revolver, of which 50,617 were produced from 1942-1945.

This example was shipped to the Oakland Branch of the San Francisco Port of Embarkation in 1943. Unlike the majority, this Commando features a 2” barrel, sometimes called a “Junior Commando”. These short barreled variants were produced in fewer numbers, and were found useful for roles where a smaller revolver was desirable such as air crews, OSS operatives or plainclothes military police. This one comes from the collection of author Kevin Williams, best known for his exceptional work on the topic of General Officers Pistols & Clandestine Organization Pistols of WWII. This revolver will certainly make a fine addition to any Colt or WWII small arms collection. Good luck and happy bidding!