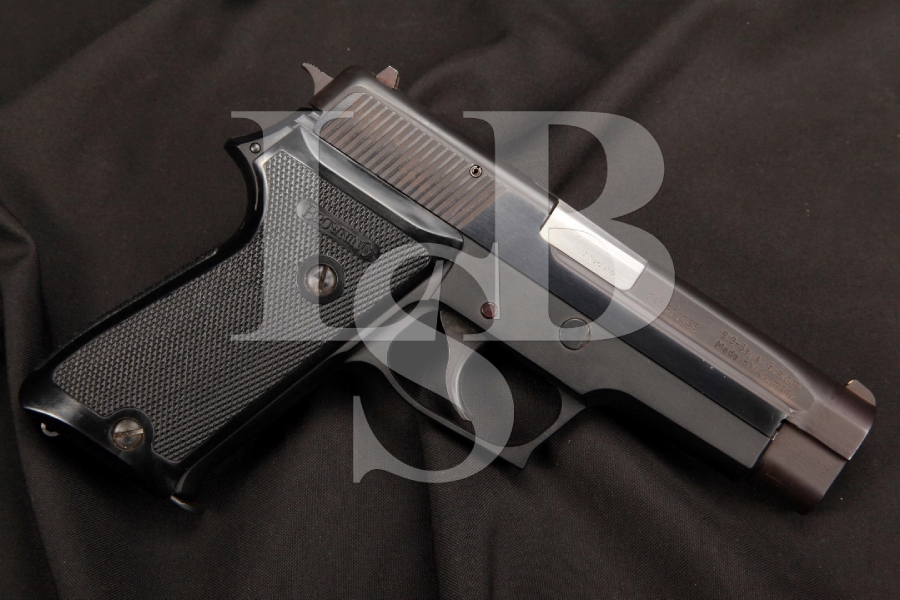 SOLD FOR: $1,809.99
LSB#: 140730LL29
Make: Sig Sauer for Browning
Model: Browning BDA, Sig Sauer Model 220
Serial Number: 345RT1955
Year of Manufacture: 1976
Caliber: .38 Super
Action Type: Traditional Double Action Semi-Automatic (DA/SA) with Decocker and Removable Magazine
Markings: The left side of the slide is marked “Browning Arms Co. / Morgan, Utah & Montreal P.Q.” The right side of the slide is marked “345RT1955” and “Sig-Sauer System / Made in W. Germany”. The barrel is marked “.38 Super Auto” and the front face of the grip frame is marked with a German Eagle over “N” nitro proof and “345RT1955”.
Barrel Length: 4 3/8”
Sights / Optics: The front sight is a white dot blade integral to the slide. The rear sight is white dot square notch leaf dovetailed to the slide.
Stock Configuration & Condition: The two piece plastic checkered wrap around grips sport a Browning logo on each grip panel. Scattered shallow handling marks are apparent on the grips and the checkering is sharp. The grips rate in about Excellent overall condition.
Type of Finish: Matte Blue with Gloss Blue Highlights
Finish Originality: All Original
Bore Condition: The bore is bright and the rifling is sharp. There is no erosion in the bore.
Overall Condition: This handgun retains about 98% of its metal finish. Mars in the matte finish are visible on the top rear of the slide and on the underside of the trigger guard while a scratch is present under the takedown lever. Otherwise, only the lightest of handling marks are present. The screw heads are sharp. The markings are clear. Overall, this handgun rates in about Excellent condition.
Mechanics: The double action single action and decocker function correctly. This pistol has a “heel” magazine release at the rear of the magazine well opening. We did not fire this handgun.
Box, Paperwork & Accessories: The pistol comes with a 9-round magazine marked “.38 Super Auto.” on the floor plate. Spots of finish thinning are visible and the magazine is in Fine condition.
Our Assessment: The Browning BDA was manufactured by Sig Sauer under contract from 1976-1980 and is essentially a rebranded Sig Sauer Model 220. The pistol features the same decocking lever which was originally found on the Sauer Model 38H. This is the ‘European’ version, which has a bottom magazine release as opposed to the ‘American’ version which was equipped with a 1911 style button. The .38 Super is the caliber of choice for many top pistol match competitors and remains one of the dominant calibers in IPSC competition. The Sig Sauer Browning BDA is an unusual gun and even less common in the discontinued .38 Super chambering. This pistol is in Excellent condition and this is a rare opportunity to acquire this excellent, desirable and hard to find pistol.