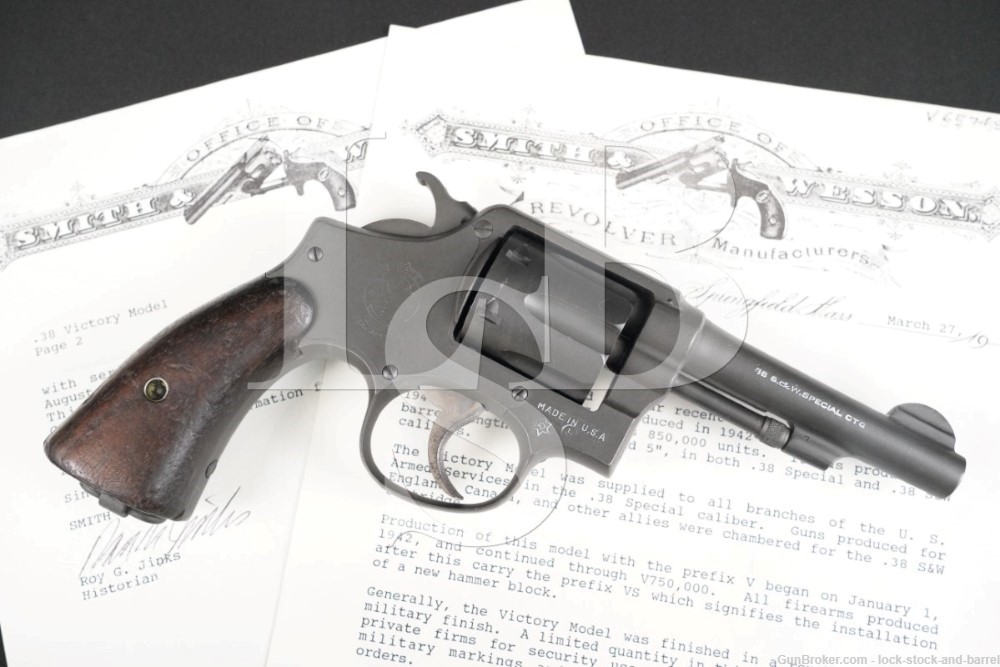 Markings: The left side of the barrel is marked “SMITH & WESSON”, the top is marked “SMITH & WESSON SPRINGFIELD MASS. U.S.A. / PATENTED FEB.6.06. SEPT.14.09. DEC.29.14”, the right is marked “38 S. & W. SPECIAL CTG”. The butt of the grip frame, barrel flat, rear of the cylinder, front of the ejector star, and rear flat of the yoke are marked with matching serial number “V657488”. The side plate has S&W’s monogram logo, the right side of the frame is marked “MADE IN U.S.A.” and has an Israeli Star of David and a circled Hebrew character. There are inspection marks on the crane, its cut, and the sides of the grip frame. The butt of the grip frame is also marked “W”. The interior of the right grip panel is stamped “657488”. The barrel flat is also marked “P”. The left side of the frame is marked “P” behind the top corner of the cylinder window. The rear face of the cylinder is also marked “S” and “P”. The backstrap is marked “HE-M”.

Stock Configuration & Condition: The grips are two-piece smooth walnut. There is a chip loss repair on the left panel at the top corner where the frontstrap widens into the frame. There are some scattered nicks, dings, and scratches, most have darkened with age. There are a few gauges that have removed surface material from the bottom faces of the grip panels. There is wear on the bottom edges. There is discoloration from age and use. Overall, the grips rate in Very Good condition.

Bore Condition: The bore is mostly bright and the rifling is sharp. There are some spots of erosion at the muzzle.

Our Assessment: At the beginning of WWII S&W began producing their M&P revolver for military use. They added a “V” for Victory to the serial number; this iteration thus became known as the Victory Model. As we entered the fray, we were producing them for U.S. forces as well as for our allies. Victory model revolvers were standard issue for Naval and Marine aviators as well as guards back in the States at defense installations and factories supporting the war effort. While we did get the Victory and win WWII, the revolvers went beyond the call of duty and were used long after the conclusion on the conflict. Continuing after WWII, regulations prohibited the 1911 and 1911A1 from being carried with a loaded chamber, this made racking the slide a difficult task for aviators as well as K9 handlers so revolvers were the clear choice. The preferred issue of revolvers for aviators lasted quite a while, and Army helicopter pilots even used Victory Models until they replaced them with modern double action 9mm semi-autos, a testament to the S&W design. This one is a truly interesting example of the Victory, the letter states it was sent to the Strategic Service, or OSS (Office of Strategic Services) in August of 1944. After WWII it made its way to West Germany where it served the Hessen Police who marked the backstrap. After its time in Germany, it then made its way to Isreal where it was used by the IDF. Better still, this one comes from the collection of author Kevin Williams, best known for his outstanding work on the topic of General Officers Pistols & Clandestine Organization Pistols of WWII. This will be a great addition to an advanced collection of martial arms or Smith & Wessons. Please see our photos and good luck!