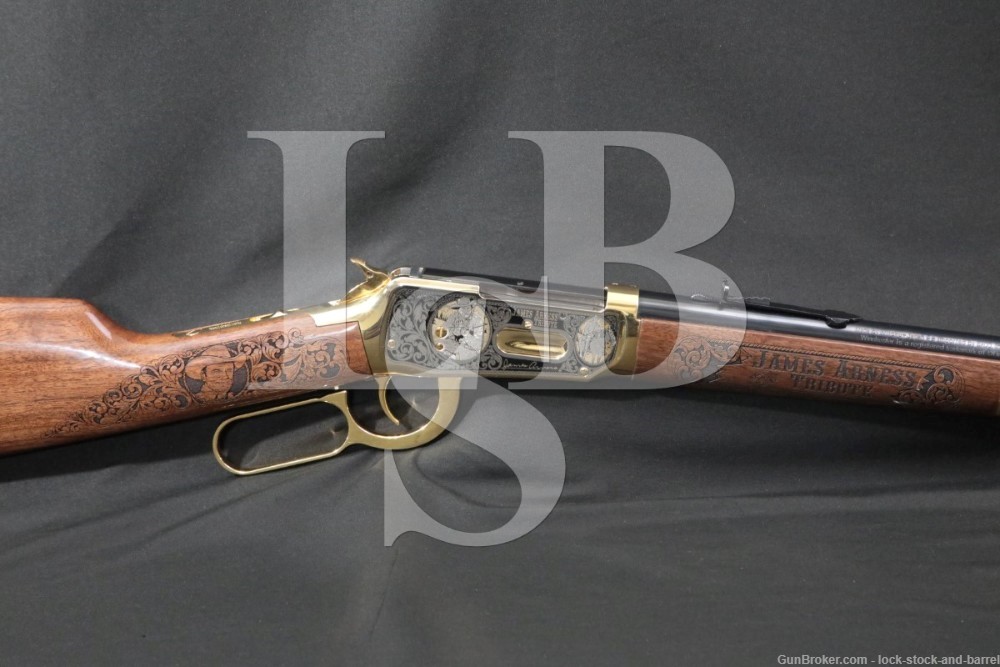 Markings: The sides of the forearm are engraved “JAMES ARNESS / TRIBUTE” surrounded by decorative borders and floral scrolls. The sides of the grip are engraved with a bust of James Arness surrounded by floral scrolls. The upper tang is marked “WINCHESTER / MODEL 1894”. The left side of the barrel is marked “WINCHESTER”, “Model 1894–Caliber 30-30 Win. ONLY”, and a circled “WP” at the rear. The right shoulder of the barrel is marked “Made by Miroku-Japan–Imported by BACO, Inc.-Morgan, Utah / Winchester is a registered trademark of Olin Corporation”. The bottom of the receiver is marked “197 OF 250”, “00008ZN94T”, and “A&A Engraving Inc. Rapid City, SD / “AMERICA REMEMBERS” ® © AHL, INC. ASHLAND, VA.”. The right side of the receiver is marked with a portrait of James Arness holding a rifle and another of him on horseback along with “JAMES ARNESS / TRIBUTE” and with his signature at the bottom. The left side of the receiver is marked with three separate portraits of James Arness and “JAMES ARNESS / TRIBUTE” on banners. Both sides of the receiver have floral scroll engraving between the words and portraits. The buttplate is marked with the winchester logo.

Stock Configuration & Condition: The stocks are two-piece high gloss engraved wood with a capped forearm, straight grip and comb, and a checkered Winchester buttplate. The wood shows no significant wear or damage, only light handling marks. The engraving is sharp and crisp. There are no chips or cracks. The LOP measures 13 1/2” from the front of the trigger to the back of the checkered Winchester buttplate which shows no wear or damage. The stocks rate in about Excellent overall condition.

Bore Condition: The bore is bright and the rifling is sharp. There is no erosion in the bore. There are a few spots of light fouling.

Overall Condition: This rifle retains about 98% of its metal finish. The balance of the finish shows a small amount of oxidation along the rear edge of the nose cap and light operational wear on the lever and hammer. Other than those minor imperfections, there are only light handling marks present. The screw heads are sharp. The markings are crisp. Overall, this rifle rates in about Fine-Excellent condition.

Our Assessment: The following information was taken from the America Remembers website: “Few Western stars stand as tall and impressive as James Arness, one of the most recognized and beloved actors from the Golden era of television and motion picture Westerns.  For many Western enthusiasts, James Arness is best remembered for his role as Marshal Matt Dillon from Gunsmoke, the longest running dramatic series in television history.  Standing an imposing 6 feet 7 inches, Arness was the big lawman with a big heart. Arness’ work garnered him many awards and recognitions.  He was designated an honorary U.S. Marshal on two occasions, was nominated for three Emmy Awards, and has been inducted into the Cowboy Hall of Fame in Oklahoma City.  Today, millions of Americans still fondly recall the golden era of the Westerns, and James Arness remains a favorite of fans around the world. Today, we are proud to honor one of America’s favorite Western actors with The James Arness Tribute Rifle. Left side of receiver features three magnificent images of James Arness, capturing in remarkable detail one of America’s favorite western personalities.  Featured in the center is a dramatic portrait of James Arness, with his familiar smile – a smile of trust and warmth that established a special relationship with all his fans.  A banner surrounding the image reads “James Arness Tribute.”  To the left, a rugged image of Arness, the frontiersman, is featured.  To the right, Arness is shown in a relaxed pose.  All artwork on the receiver is featured in an elegant combination of 24-karat gold and nickel, with a special blackened patinated background to accentuate the artwork. Right side of receiver features James Arness on horseback, a familiar role for the lawmen of the Old West.  Every cowboy depended on his horse, and for many cowboys, his horse was a constant companion and trusted friend.  To the left is an image of Arness kneeling with his rifle at the ready, prepared for any danger.  In the center of the artwork you’ll find James Arness’ signature in gold, along with the title of the Tribute.  In the tradition of the finest presentation firearms, elegant scrollwork in nickel frames the artwork, adding additional elegance to this handsome Tribute.” This rifle is a true thing of beauty with its eye-catching nickel accents and gold plating. For the true Winchester and Western picture enthusiasts, this rifle, which commemorates a decorated Western picture legend, belongs in your collection. Please see our photos and good luck!