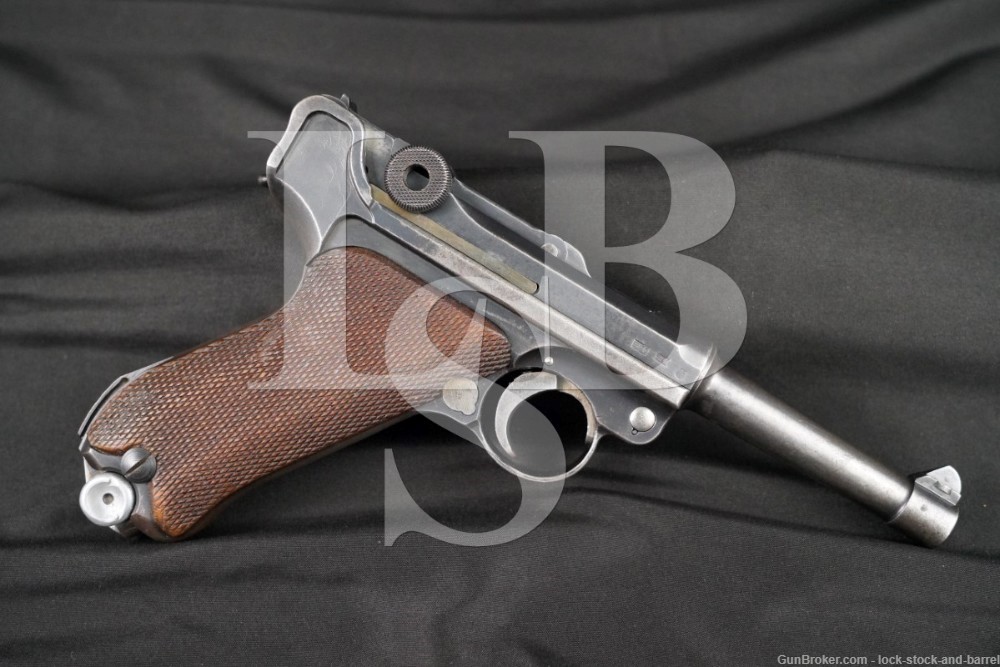 Stock Configuration & Condition/ Grip: The grip panels are two-piece checkered wood. The grip panels have light handling marks, nicks and scuffs. Notably, the panels have some scattered patches of black discoloration and there is light wear around the screw slots. The checkering remains mostly sharp. There are no chips or cracks. Overall, the grips are in Very Good condition.

Overall Condition: The pistol retains about 55% of its metal finish. There are scattered light handling marks, nicks and scuffs on the gun’s metal surfaces. Notably, the finish worn off the leading edges, the majority of the barrel’s finish has worn off, the finish has thinned out on the grip straps and the gun is coated in light surface oxidation. The markings remain clear. The screw-heads have light tool-marks but they remain serviceable. Overall, the pistol is in Very Good condition.

Mechanics: The hold-open latch is not properly secured to the frame and falls out when the gun is taken down, but it is easily replaced and does not interfere with the action. Otherwise, the action functions correctly. There is barely palpable play between the barrel assembly and frame. We did not fire this pistol. As with all used firearms, a thorough cleaning may be necessary to meet your maintenance requirements.

Box Paperwork and Accessories: The pistol comes with a single magazine. The magazine has some light handling marks, its finish has largely worn off  and it is coated in light surface oxidation. Overall, the magazine remains in Very Good condition.

This particular Luger was manufactured 1934 as indicated by the “K” marking on the chamber ring. Mauser took over production of the Luger P.08 for the German military in 1934 (a year after Hitler came to power) and first year production P.08s were marked with a “K” rather than a formal date code to conceal Germany’s rearmament which was in violation of the Treaty of Versailles. Germany had never fully conformed to the provisions of the treaty, but following the NSDAP assumption of power it began to accelerate its military development. This was initially done in secret, but by 1935 the charade was no longer needed as the country began to openly declare it was remilitarizing. These markings add a unique flavor to this Luger which fits into the transition period from the Weimar to NSDAP eras. It lacks the politically overt NSDAP markings seen on Lugers made several years later, but is a direct byproduct of NSDAP policies vis-a-vis Germany’s rearmament. Despite some handling wear the gun remains aesthetically pleasing and ergonomic. While the hold open latch is not properly secured, otherwise the gun remains a mechanically sound option. Aside from the breechblock, the gun is serial matched. If you are a fan of German military arms and WWII history then this is the handgun for you. Good luck on your bid!