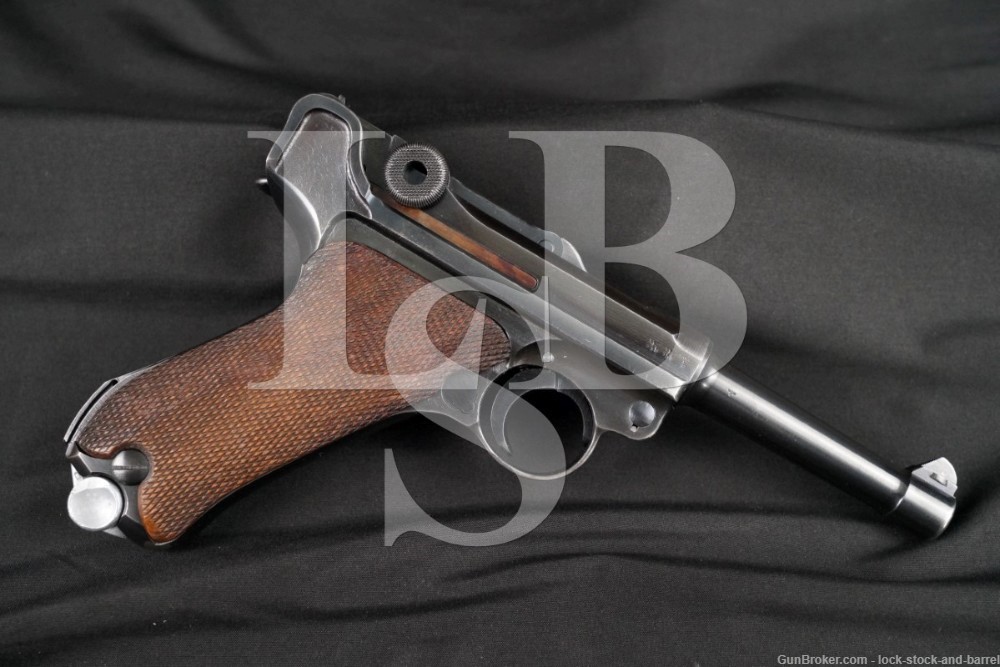 Stock Configuration & Condition/ Grip: The grip panels are two-piece checkered wood. The grip panels have light handling marks, nicks and scuffs. Notably, the panels have some scattered patches of black discoloration. The checkering remains mostly sharp. There are no chips or cracks. Overall, the grips are in Very Good condition.

Overall Condition: The pistol retains about 80% of its metal finish. There are scattered light handling marks, nicks and scuffs on the gun’s metal surfaces. Notably, there is finish loss along the leading edges and some light wear around the muzzle. The markings remain clear. The screw-heads are unmarred and serviceable. Overall, the pistol is in Very Good plus condition.

This particular Luger was manufactured in 1940, a year into the Second World War. It would prove to be the most successful year of the war for Germany with France defeated in less than two months and several major victories for the Wehrmacht across Europe primarily at the expense of the British Expeditionary Force (known as the BEF, a common joke in Britain at the time was to refer to the BEF as the “Back Every Friday” force due to their repeated defeats). The pistol’s markings are consistent with army issued small arms manufactured in 1940. Mauser used several codes on the weapons it manufactured with the code “S/42” in use initially before being replaced by “42” in 1939 and finally “byf” in 1941. Despite some light handling wear the gun remains aesthetically pleasing and it is both an ergonomic and mechanically sound option. Aside from the magazine, the gun appears to be in its original configuration as all the parts are serial matched. If you are a fan of German military arms and WWII history then this is the handgun for you. Good luck on your bid!