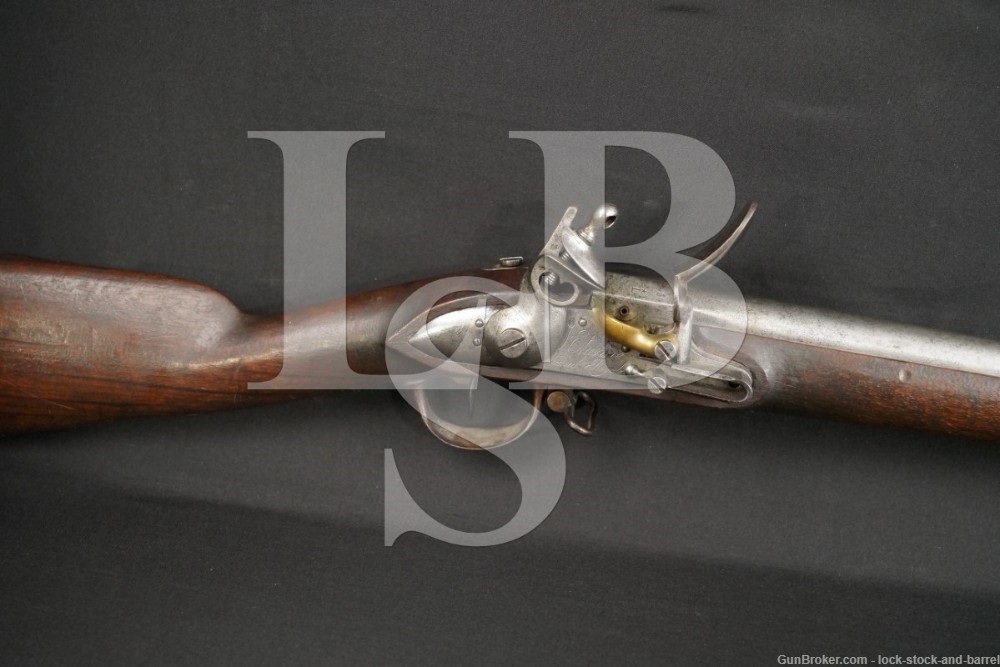 Year of Manufacture: Circa 1817, Antique

Markings: There is a faded mark on the left side of the forend, just behind the side-plate. The left side of the butt has a cartouche marked “P.”, “L.” and “D.” inside an oval and “330”. The nose-cap, barrel bands, side-plate, trigger guard and butt-plate have assembly marks. The lock-plate is marked “St. Etienne / Manufte Royale”. The hammer, pan and lock plate have small assembly marks. The right side of the butt features a faded cartouche with the fleur-de-lis that features the date “1817” which had a brass covering over it at one point that is no longer attached or included with the rifle (this part is sometimes incorrectly reffered to as a “holy water” plug, in reality it was a small attachment, similar to a stock disc, which indicated that the gun was French government property). The top tang has a faded marking “M1777”. The right side of the chamber has a faded date stamp (it is clear that the gun was made in the 19th century but the last two digits of the date code are faded). The right side of the chamber is marked with two proof marks. The top of the wrist is marked with French letters.

Stock Configuration & Condition/ Grip: The wood stock features a metal nose cap, two barrel bands (the front barrel band has a fixed sling swivel), a lock-plate, a side-plate, a straight wrist with finger grooves integral to the bottom tang, a sling swivel fixed to the front of the trigger guard, a straight comb with a cheek rest cut into the left side of the butt and a metal butt-plate. The stock has light-moderate handling marks, nicks, compressions and scuffs. Notably, there’s a light crack on the left side of the forend just ahead of the side-plate and a small ding on the right side of the forend just behind the rear barrel band. The LOP is 13” from the trigger to the rear end of the butt-plate. The butt-plate is coated in light surface oxidation and has some light handling marks. Overall, the stock is in Very Good condition for an Antique.

Bore Condition: The bore is grey with scattered light-moderate erosion.

Overall Condition: The musket retains about 5% of its metal finish. The brass pan on the lock is lightly tarnished but retains most of its finish and the brass side-plate is entirely tarnished but the rest of the gun is in the white. The metal parts of the musket are coated in scattered light patches of surface oxidation. There are some light handling marks, nicks and scuffs on the gun’s metal surfaces. The marking on the top-tang and the left side of the chamber are both obscured by oxidation and many of the stock markings are faded but the rest remain clear. The screwheads have light tool-marks but they remain serviceable. Overall, the musket is in Very Good condition for an Antique.

Mechanics: The half-cock safety does not engage but otherwise the action functions correctly. We have not fired this musket. As with all used firearms, a thorough cleaning may be necessary to meet your maintenance requirements.

Our Assessment: This St. Etienne Arsenal manufactured fusil Charleville Modèle 1777 is a 17.5mm caliber flintlock musket manufactured for service with the French military. Manufactured from 1777 until 1822, the Model 1777 was the standard issue infantry weapon wielded by French soldiers during the American Revolution and Napoleonic Wars, a number that had been converted to the percussion ignition system remained in service until the 1840s. The gun was designed by Jean-Baptiste Gribeauval who was a French military officer and weapons designer most famous for the Gribeauval system. His system led to the standardization of calibers and the reduction of artillery pieces weight, he also championed the use of interchangeable parts between weapon systems. This philosophy was applied to the Model 1777 which proved its worth on numerous battlefields. The gun is easily distinguished from the earlier patterns of the Charleville musket by the cheek rest added to the butt.

The French arsenals were referred to as royal armories during the Bourbon era (1777-1793 when King Louis XVI was executed and 1815-1830 during the brief Bourbon restoration following Napoleon’s defeat at Waterloo), thus based on the cartouche marking this gun was either fabricated or refurbished during the Bourbon Restoration in 1817. The gun’s half-cock safety does not engage, but otherwise the action functions properly. The gun is beautifully preserved with many original markings still present. This is a great option for fans of historical firearms. Good luck on your bid!