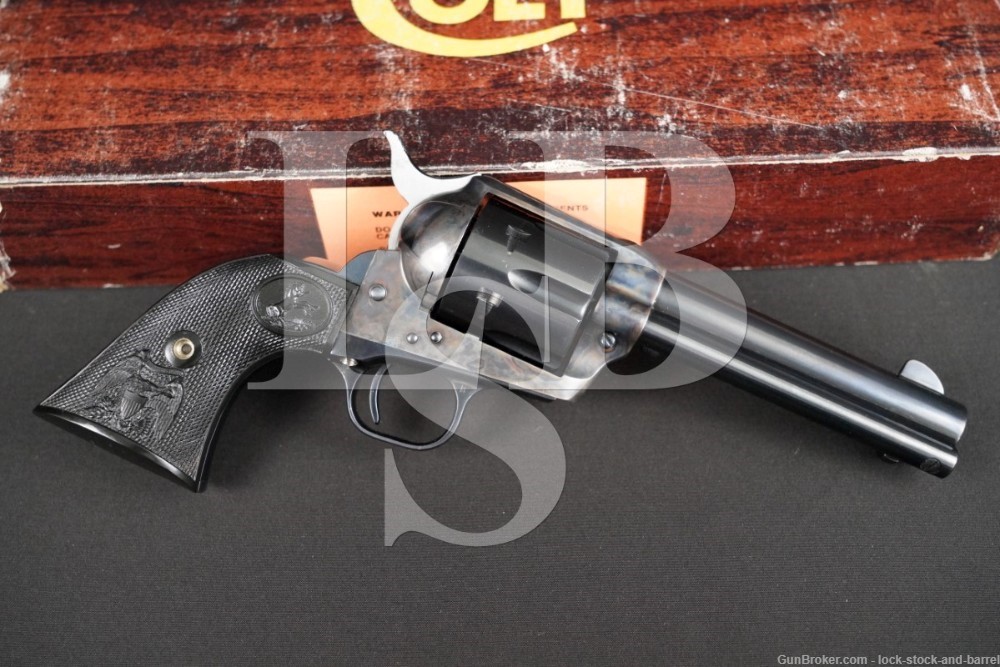 Stock Configuration & Condition: The grips are two-piece checkered black hard rubber with rampant colt in oval at the top and American Eagle at the bottom of each panel. The grips have no notable wear or damage, only light handling marks. The checkering is sharp with good detail in the colts and eagles. There are no chips or cracks. Overall, the grips are in Excellent condition.

Overall Condition: This handgun retains about 97% of its metal finish. The cylinder has faint turn-wear. There are a few scattered minor nicks and tiny scratches with one tiny but deeper nick on the cylinder between two of the flutes. The sides of the hammer show light operational wear, more notable on the right. The screw heads range from sharp to tool marked with strong slots. The markings are clear. Overall, this handgun rates in Fine-plus condition.

Box, Paperwork & Accessories: This revolver comes in a faux-wood cardboard Colt box with no label, two-piece styrofoam inserts. The box and inserts both show moderate-heavy wear with some losses on the styrofoam.

Everyone should have a Colt Single Action Army, and this would be a beauty to add to any collection. Manufactured in 1980, this revolver is in Fine-plus condition, appearing to have seen gentle use. With a 4 3/4″ barrel and chambered for .357 Magnum, this is a classic Single Action Army chambered for a more modern magnum cartridge. This makes it suitable for addition to a collection, but is also something that could be carried as a hunting sidearm or used in Cowboy Action Shooting competitions. Please see our photos and good luck!