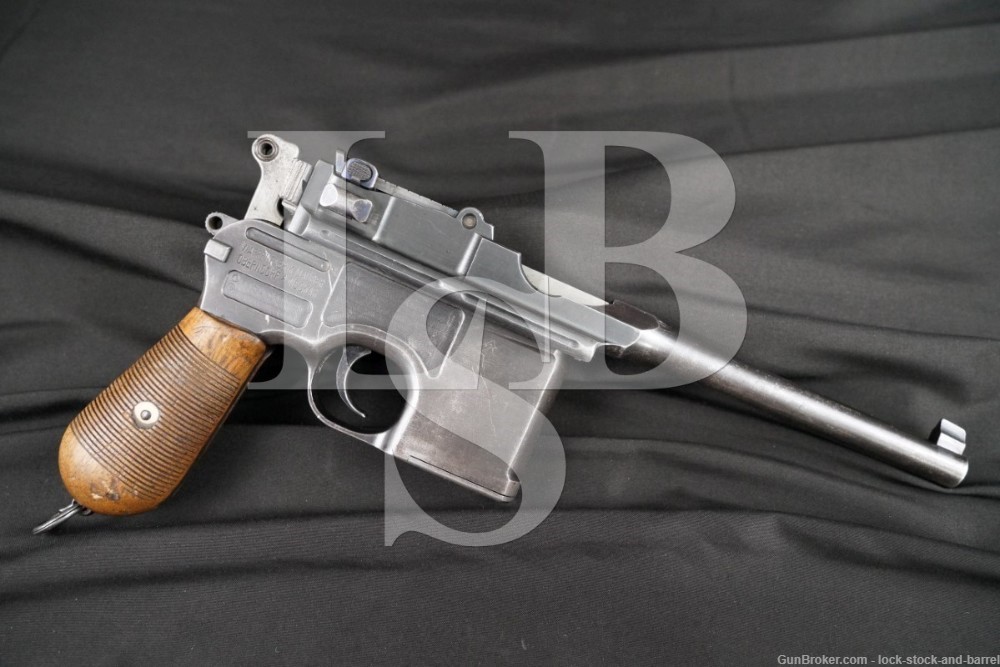 Stock Configuration & Condition: The grips are two-piece serrated wood panels. The grips show light-moderate handling wear with scattered light nicks, scuffs and scratches. There is a more notable ding on the right panel toward the bottom. There is wear on the bottom of each panel from the lanyard ring. The wood shows some discoloration from age and handling. The serrations are well defined. There are no chips or cracks. Overall, the grips are in about Very Good condition.

Overall Condition: This pistol retains about 78% of its metal finish. The finish is thinning at all edges. There is scattered light finish wear, some minor surface oxidation and infrequent spots of minor erosion. There is handling wear in the grip areas and surface oxidation around and under the grips. The rear sight slider has some light surface oxidation in otherwise strong fire-blue, the bolt stop’s fire blue has some wear on the side, but is fairly strong on the top and bottom. There are some scattered light nicks, scuffs and scratches. The action shows operational wear. The screw head is sharp. The markings are mostly clear, the bolt markings are worn. Overall, this pistol is in Very Good condition.

Our Assessment: The Broomhandle Model 1896 Mauser is certainly an interesting looking firearm. Its features are the most distinctive of any other pistol. In addition to being popularized in Soviet films as the iconic weapon of the Russian revolution and civil war, it was even used as a basis for futuristic weapons like the blaster used by Han Solo in Star Wars. This example was made during the Great War and has quite an interesting set of markings.

The pistol has standard commercial markings, but also is marked “1920”, an indication that this pistol remained in German government inventory under the terms of the Treaty of Versailles. While the treaty strictly limited arms production, the Germans did refurbish and update those arms they were permitted to have in service. The pistol also retains its original 5 1/2″ barrel length while most post-war pistols were restricted to 100mm. This example is also marked as being issued to the Reichfinanzverwaltung (RFV), or Reich Finance Administration, which was responsible for the banks and the finances of Weimar and later Yahtzee Germany. While most of the 1920-marked C96 pistols we have seen have had their barrels shortened, all of the other examples we have found of RFV-marked pistols have the original barrel length.

The pistol has serial matching parts and wear which is pretty light considering its age. Its scarce features will make it a great addition to a Mauser, WWI small arms, inter-war German arms, or early autoloading handgun collection. Please see our photos and good luck!