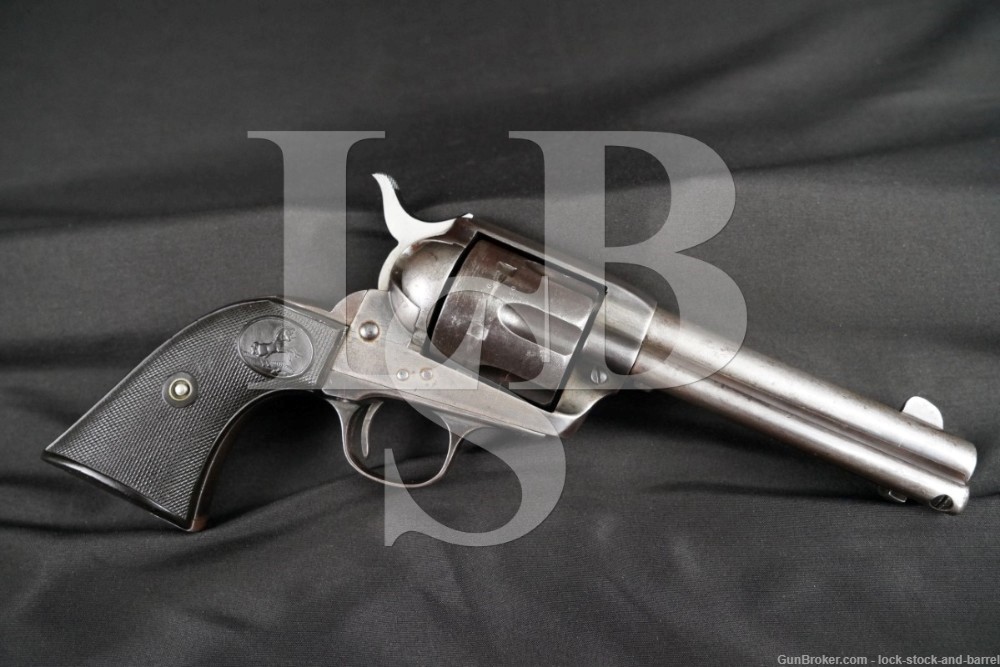 Stock Configuration & Condition: The grips are two-piece checkered black hard rubber with rampant colt in oval at the top of each panel. The grips have light handling wear with some scattered minor nicks and scratches. The checkering is generally well defined and there is good detail on the rampant colts. There are no chips or cracks. Overall, the grips are in Very Good condition as not original to the gun.

Finish Originality: Refinished. The hammer is not original to the gun.

Overall Condition: This revolver retains about 30% of its current metal finish. Strongest remaining finish is in protected areas of the trigger guard. Other surfaces have a mottled appearance with some finish and most areas either cleaned or worn to white or gone to a light patina. There are some scattered light nicks, scuffs, scratches and some minor surface oxidation. The rear face of the cylinder has a couple of firing-pin strikes at the edges of chamber mouths, but the timing is correct. The action shows operational wear including turn-wear on the cylinder. The screw heads range from sharp to disfigured with usable slots. The remaining markings range from clear to worn and incomplete. Overall, this revolver is in Good condition as refinished.

Mechanics: The action functions correctly. The cylinder locks up with light play on all six chambers. The trigger is crisp. The cylinder has a removable bushing, but it is seized in place. We did not fire this revolver. As with all used firearms, a thorough cleaning may be necessary to meet your maintenance standards.

Our Assessment: Colt’s Single Action Army is, perhaps more than any other, an iconic American pistol. It was the U.S. issue sidearm for the last two decades of the 19th century, used by pioneers, outlaws and lawmen across the expanding nation, and captivated audiences on the silver screen and television. Produced for nearly a century and a half, they are still being made, today! This example is a 1st Generation Single Action Army made in 1909. It is in Good condition, retaining about 30% of its new blued finish with a decent bore. Apart from the cylinder bushing, which is seized in the cylinder, it still has quite strong mechanics. Any 1st Generation SAA would make a great addition to a Colt collection, and this early 20th Century example should be no exception. Whether you want to display it with its current “been there, done that” appearance or restore it, this will be a nice pony to add to your stable. Please see our photos and good luck!