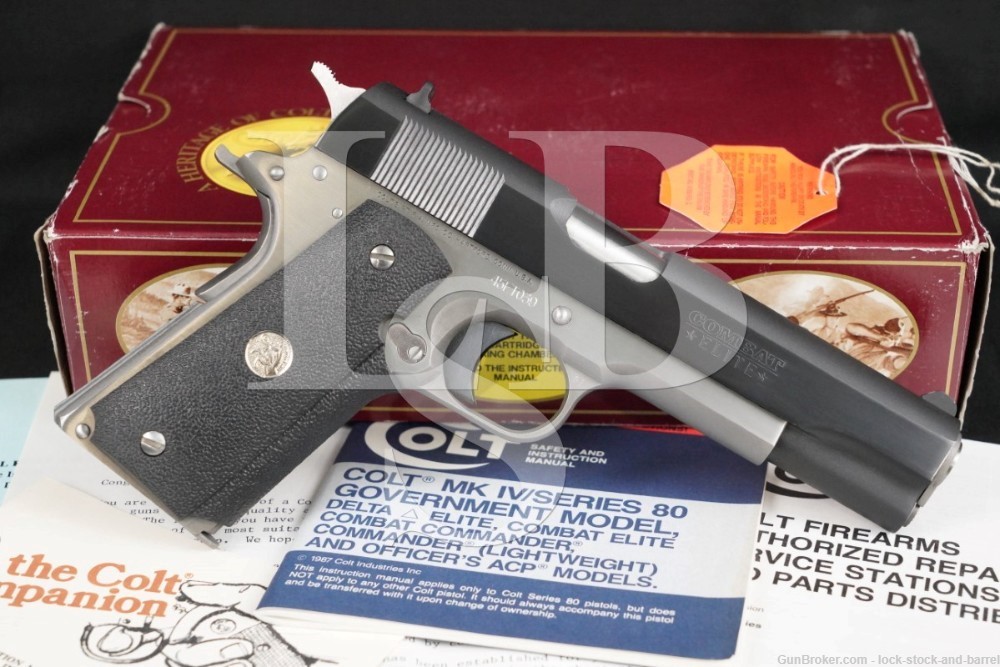 Stock Configuration & Condition: The grip is a Colt branded Pachmayr textured black rubber wrap around grip with silver Colt medallions. The grip has no notable wear or damage, only light handling marks. There are no rips or tears. Overall, the grip is in Excellent condition.

Overall Condition: This pistol retains about 98% of its metal finish. The left slide flat has a minor scuff at the bottom edge between the slide stop and takedown notches. The action shows faint operational wear. Otherwise, there are only light handling marks. The screw heads are sharp. The markings are clear. Overall, this pistol is in Excellent condition.

Mechanics: The action functions correctly. The slide has minor play to the frame. The trigger is crisp. This pistol was made with a firing pin block safety. We did not fire this pistol. As with all used firearms, a thorough cleaning may be necessary to meet your maintenance standards.

Box, Paperwork & Accessories: This pistol comes in a maroon cardboard Colt box with serial-matching label, two-piece styrofoam inserts, an assortment of factory paperwork including manual and a single 7-round magazine.

Our Assessment: Colt’s 1911 served the United States military through two World Wars and several other conflicts, is still in use by some units today, and has become popular with law enforcement, competitors, and recreational shooters across the nation. The design has seen some updates including a firing-pin block safety, higher profile sights, and more ergonomic grips, but the basic design and fantastic trigger remain the same after more than a century.

This example is an interesting variant. It is essentially a Combat Elite model chambered for .45 ACP. The pistol was produced in 1989 as an Elite Team model, intended to be paired with a 10mm Delta Elite Team model. Oddly, it appears that while these pistols were intended to be sold as matched sets, many or even most were sold singly or have been separated since the pairs were offered. The appeal of a quality Colt 1911 has been a constant for more than a century, and this is an attractive piece to add to any collection. If you’re looking for your first 1911 or your last, this would be a good pony to add to the stable. Please see our photos and good luck!