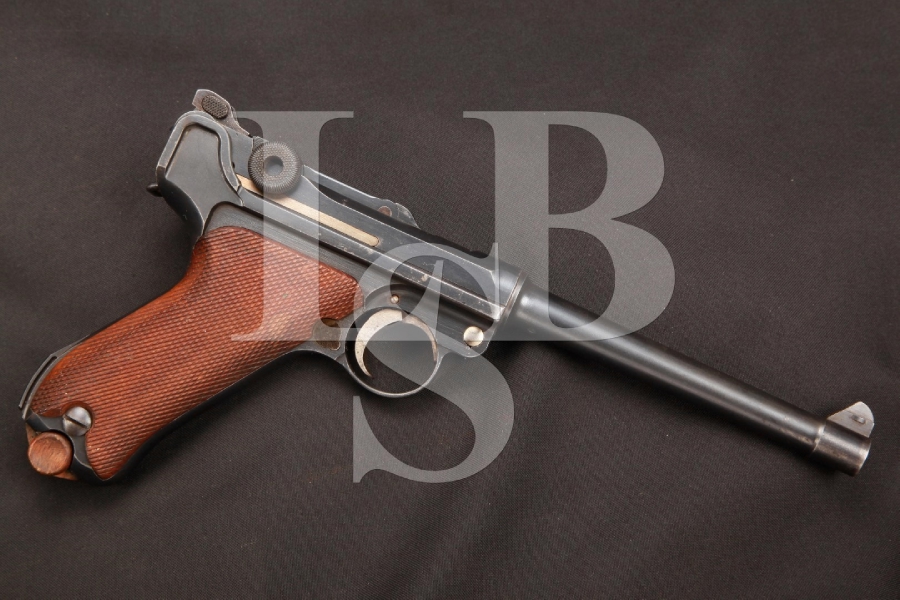 LSB#: 150110DD02
Make: DWM
Model: 1914 Naval Luger
Serial Number: 9071
Year of Manufacture: 1917
Caliber: 9mm Parabellum
Action Type: Toggle Action Semi-Automatic with Removable Magazine
Markings: The left side of the receiver at the chamber is marked with a Crown and a Crowned “M”, while the left side of the barrel at the receiver is marked with a Crown. The underside of the barrel is marked with a Crowned “M” over “9071”. The crowned markings are as shown on lines 5 and 6 of page 234 of “Luger Variations” by H. E. Jones, as shown for 1904, 1906, 1908 and 1914 Naval Lugers. The top of the chamber ring, the left side of the frame at the chamber and the left side of the front sight base are marked “1917” and the front toggle is marked with a script “DWM”. The top of the rear toggle is marked “100” and behind the rear sight it is marked “71”. The bottom of the takedown lever, the bottom of the left sideplate, the left rear of the sear bar and the top of the sear bar safety are also marked “71”. The front of the frame under the barrel is marked “9071”. The left side of the breechblock is marked with a Crown and the front of the left side flat is marked “Gesichert”.
Barrel Length: 5 7/8”
Sights / Optics: The pistol is mounted with a serrated ramped blade front sight in a dovetail on the front barrel band. The rear sight is a two position “V” notch on the back of the rear toggle. The top of the toggle in front of it is marked “100”. When the button on the right side of the sight is depressed, the sight can be moved back, revealing “200” marked on the bar below the sight just behind the “100”.
Stock Configuration & Condition: The grips are checkered walnut that show oil staining. There is a very small amount of play in the right grip. The checkering shows moderate wear with heavy wear along the front and rear edges of the grips. There are a few minor mars in the grips. The grips are in Very Good condition.
Type of Finish: The finish is blue. The trigger, safety, ejector and takedown lever have a straw colored finish. The sear bar spring has a fire blue finish.
Finish Originality: The finish is original.
Bore Condition: The bore is bright and the rifling is sharp. There is no erosion in the bore.
Overall Condition: This pistol retains about 90% of its metal finish. There is a spot of pitting on the takedown lever. There are two spots of frosting on the right edge of the frame and a few small marks in the right edge and left side of the frame and in the left side plate There is thinning on the edges of the barrel band, frame, receiver, and the backstrap, and surface loss on the edges of the left sideplate. The safety, rear sight push-button, magazine release, and toggle knobs have sharp checkering/serrations, while the checkering on the takedown lever shows light wear. The grip screws are sharp and the markings are clear, and those on the receiver have raised edges. This pistol rates in about Fine condition.
Mechanics: The action works correctly. This pistol has the two position rear sight that is standard for this model. We have not fired this pistol.
Box, Paperwork & Accessories: This pistol comes with one magazine having a blued follower and a wooden bottom piece marked “9071” and with a Crowned “M” Naval proof. The proof and serial number are correct, but most of the Naval magazines had concentric circles on the sides of the bottom piece, which this does not. The magazine has a tinned finish that shows a few spots of tarnish and very light wear. The bottom piece shows a few small compression marks on its edges. The loading button is in-the-white steel, and as all we have ever seen were blued, this may have been replaced. The magazine is in about Very Good condition, and would be about Fine if it weren’t for the possibly replaced thumbpiece.
Our Assessment: The Luger (Pistole Parabellum or P-08) is perhaps the most aesthetically and ergonomically pleasing of all autoloading centerfire pistols. It is also one of the strongest, most accurate and most recognizable service pistols ever made. Georg Luger developed his famous pistol in 1898-1899 (starting with the Borchardt/Luger transitional pistol). The Luger is, essentially, a much improved Borchardt type pistol, which was itself based on the toggle action concept used by Sir Hiram Maxim in the world’s first practical machine gun. The Maxim shot its way to bloody fame in World War One, which also became the combat proving ground for the Luger pistol. This is a DMW 1914 Naval Luger made during WWI in 1917 with all matching numbers and the correct proofs, including the magazine. The pistol has about 90% of its original finish remaining and is in about Fine overall condition. There is a spot of pitting on the takedown lever and a few small spots of frosting on the frame. The checkering on the grips shows moderate to heavy wear. There were about 35,000 to 40,000 of these pistols made between 1914 and 1918 for the German Navy. This is a somewhat rare pistol; many of the Naval models were lost in the war and many of those that survived were badly eroded from salt air. It is not very often you come across one in Fine condition with all matching numbers. It is sure to gather the attention of the Luger collectors out there.