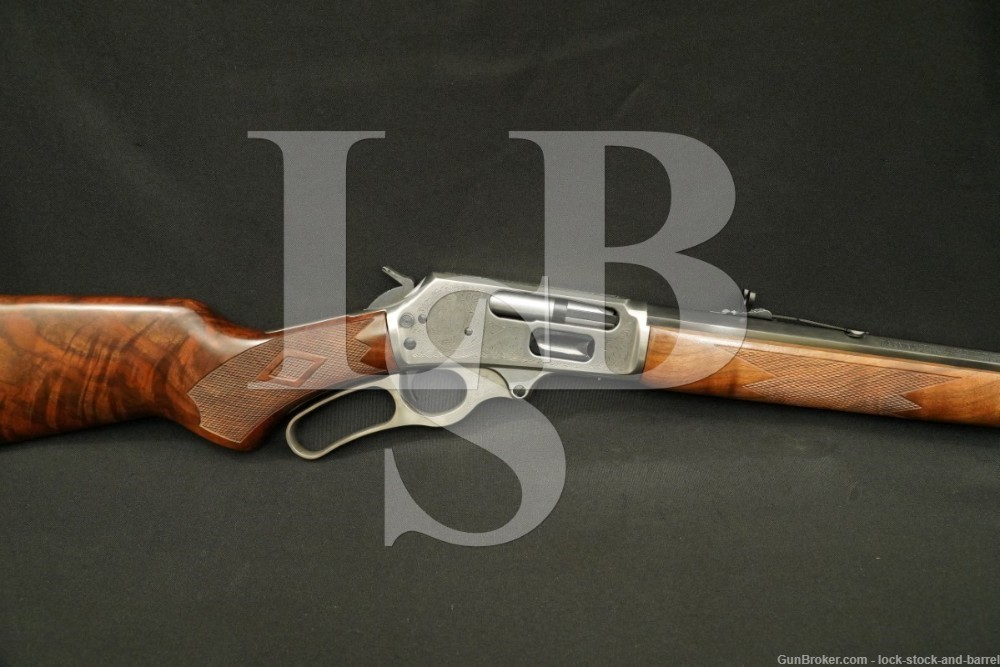 Barrel Length: The half octagon and half round barrel is 24” in length.

Sights / Optics: This rifle is mounted with a semi-buckhorn rear elevator sight that is dovetailed into the top of the barrel. The sight has a reversible insert with a “U” notch on one end and a “V” notch on the other with a white diamond aiming point in the center. The front sight is a tall brass beaded blade dovetailed into the barrel. The top of the receiver has two sets of two drilled, tapped and filled holes for scope mounts.

Stock Configuration & Condition: The stocks are two-piece checkered walnut with an oiled finish, capped forearm, pistol grip, straight comb, and a crescent blue steel buttplate. The buttstock has the “Marlin Bullseye” in the belly. The buttplace is missing and there is a small loss in the wood at the toe. The LOP measures 13 3/8” from the front of the trigger to the back of the wood. The buttplate shows light erosion at the toe. The stocks rate in about Good condition.

Type of Finish: Blue Barrel with a Stainless Steel Receiver

Bore Condition: The bore is bright and the Ballard rifling is sharp. There is no erosion in the bore, just some light fouling on the grooves.

Overall Condition: This rifle retains about 97% of its metal finish. There is scattered faint oxidation throughout the receiver and lever. There are a few light handling marks on the barrel and magazine tube. The screw heads are sharp and the markings are crisp. Overall, this rifle rates in about Very Good-to-Fine condition, and if not for the damage to the stock, would rate in Fine-to-Excellent condition.

Mechanics: The action functions correctly. The lever is tight and the action is smooth. There is a lever safety and a half-cock safety position on the hammer in addition to a cross-bolt safety at the back of the receiver. We did not fire this rifle. As with all used firearms, a thorough cleaning may be necessary to meet your maintenance standards.

Our Assessment: To commemorate 125 years of Marlin Firearms and 100 years of the Model 1895, Marlin created this special specimen, the 1895 Century Limited. The right side of the frame features an engraved gentleman on horseback clutching a rifle, surrounded by scroll engraving and engraved Marlin Firearms Co. 125th Anniversary. The left side features two engraved bears surrounded by mountains and scroll engraving, with engraved Model 1895 100th Anniversary. The stock is checkered fancy walnut with a  pistol grip buttstock and blue finished crescent buttplate. The engraving was done by Bottega C. Giovanelli. Bottega Incisioni di Cesare Giovanelli was founded almost seventy years ago, in 1955. This is a beautiful rifle of which only 2,500 were manufactured. Please see our photos and good luck!