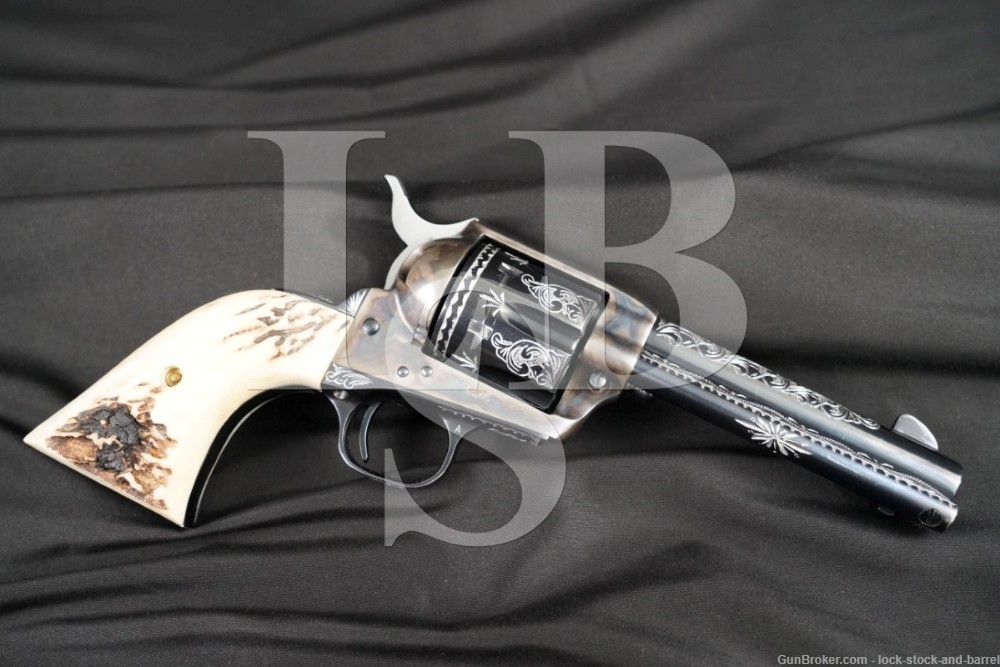 Markings: The left side of the barrel is marked “COLT SINGLE ACTION ARMY .357 MAGNUM”. The top of the barrel is marked “COLT’S PT. F.A. MFG. Co. HARTFORD CT. U.S.A.”. The left side of the frame is marked “PAT. SEPT. 19, 1871 / JULY 2,72 JAN.19,75” and with the “Rampant Colt” logo. The underside of the frame at the grip frame is marked “SA61960”. The front and back strap are both marked “SA61960” on the left side. The left front of the trigger guard is marked with a “VP” in a triangle and at the rear with a “P”, there is an “A” marked on the right of the trigger guard. The front of the cylinder is marked “1960”. The barrel, cylinder and grip frame have decorative engraving through the finish. Some markings, including most of the engraving, have been filled with a silver color.

Stock Configuration & Condition: The grips are two-piece Eagle Grips stag panels. The right panel has a light scratch above the screw hole. Otherwise, there are only light handling marks. There are no chips or cracks. Overall, the grips are in Excellent condition as not original to the gun.

Overall Condition: Discounting the engraving, which was cut through the finish, this handgun retains about 95% of its metal finish. The frame retains strong case color, perhaps slightly muted with evidence of faint oxidation on the right below the cylinder which has been scrubbed out. The barrel has finish wear on the left at the muzzle and there is wear on the front edge of the ejector housing. The grips areas have infrequent, very faint surface oxidation. The action shows operational wear including light turn-wear on the cylinder. There are a few scattered minor nicks and scratches. The screw heads range from sharp to lightly tool marked with strong slots. The markings are clear. Overall, this revolver is in Fine condition.

Mechanics: The action functions properly and quite smoothly. At the least, the mainspring has been filed down, resulting in a light hammer pull. The cylinder locks up with minor rotational play and barely perceptible end-shake on each chamber. We did not fire this handgun. As with all used firearms, a thorough cleaning may be necessary to meet your maintenance requirements.

Everyone should have a Colt Single Action Army, and this would be a beauty to add to any collection. Manufactured in 1982, this revolver is in Fine condition, appearing to have seen responsible use. With a 4 3/4″ barrel and chambered for .357 Magnum, this is a classic Single Action Army chambered for a more modern magnum cartridge. The revolver has been engraved and a set of stag grips installed, giving it a distinctive and attractive appearance. This revolver is suitable for addition to a collection, but is also something that would make for a fancy BBQ gun or could be used in Cowboy Action Shooting competitions. Please see our photos and good luck!