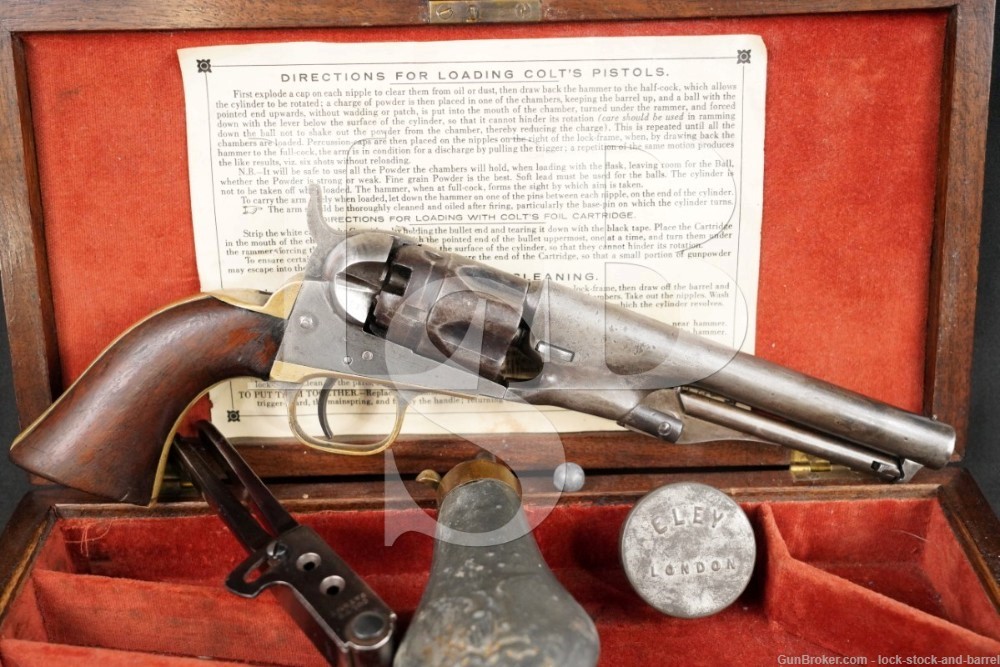 Sights / Optics: The front sight is a conical brass post (also called a “pin type”) threaded to the barrel at the muzzle. The rear sight is a “V” notch at the front of the hammer, visible when cocked.

Stock Configuration & Condition: The grip is one-piece smooth walnut. The grip has some scattered light nicks and scratches with thinning finish from handling. There is a tiny loss on the right panel at the top-front edge by the trigger guard. There are no cracks. Based on the fit of the grip to the grip frame, we suspect that it is not original to the gun. Overall, the grip is in Very Good condition.

Finish Originality: Remaining finish appears Original. Most of the steel surfaces show signs of aggressive cleaning and possibly treatment with cold blue in the distant past.

Bore Condition: The bore is gray with well defined rifling. There is scattered light erosion and some pitting in the bore.

Overall Condition: This revolver retains about 15% of its metal finish. There is some scattered remaining silver plate on the grip frame, mostly around the trigger guard and on the butt. The cylinder has some scattered remaining blue finish, mostly in the flutes. There are some other scattered spots of remaining finish. Most surfaces have been cleaned or worn to white. There are scattered nicks, scuffs and scratches. There is some scattered minor oxidation and spots of light erosion. The safety studs between the nipples on the rear of the cylinder range from intact to sheared. The action shows operational wear. The screw heads range from sharp to tool marked with strong slots. The markings are clear. Overall, this revolver is in about Good condition as Antique (see Mechanics).

Mechanics: The cylinder tends to over-rotate. On three chambers, the cylinder can be pushed out of lock without much effort, but does lock up properly on the other two chambers with light play. Otherwise, the action functions correctly. The barrel has no play to the frame. We have not fired this revolver. As with all used firearms, a thorough cleaning may be necessary to meet your maintenance standards.

Box, Paperwork & Accessories: This revolver comes with a wood display case. The interior of the case has compartments for the revolver as well as the included powder flask, two chamber ball/bullet mould, cap tin, and another compartment which currently has a key for the case’s lock and several lead balls. The mould is marked “COLT’S PATENT” on the sprue plate and “36P” on one side. The tin’s cap is marked “ELEY / LONDON”. The inside of the case’s lid has a paper with instructions for loading and cleaning a Colt revolver.

Our Assessment: The Colt 1862 was produced in two variants, the 1862 Police and the 1862 Pocket Navy, between 1861 and 1873 with about 47,000 made between the two. The 1862 Police has a similar barrel profile to the full-size Model 1860, fluted cylinders and a frame about the same size as the 1849 Pocket. By rebating the cylinder, the 1862 models were able to use this smaller frame while still firing a .36 caliber projectile, making for a potent pocket-sized revolver in its day. Many of the 1862 models were carried by soldiers in the Civil War, on both sides. With fewer than 50,000 made between the two 1862 models, they are considerably more scarce than the 1849 Pocket models. This early example would be a nice addition to a Colt collection missing the 1862 Police, and will display well with its included case. Please see our photos and good luck!