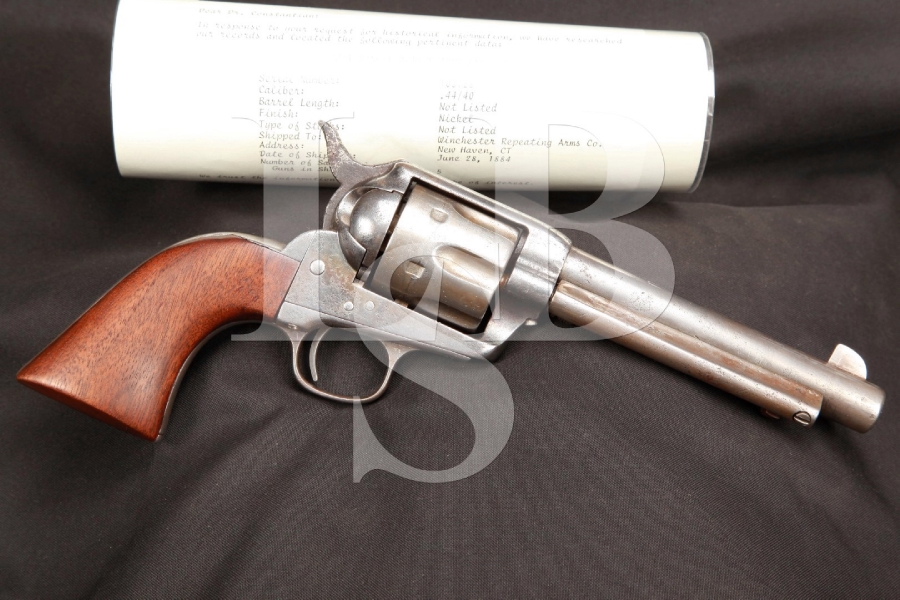 LSB#: 140612AS02
Make: Colt
Model: Frontier Six-Shooter, Blackpowder 1st Generation
Serial Number: 108788
Year of Manufacture: 1884
Caliber: .44-40 Winchester (.44 Winchester Center Fire)
Action Type: Single Action Revolver with Side Loading-Gate Cylinder
Markings: The top of the barrel is marked “…CT. U.S.A.” The left side of the frame is marked “Pat. Sept. 19. 1871. / “ July 2.–72. / “ Jan.19.–75.” The bottom of the frame at the trigger guard and the trigger guard are marked “108788”. The bottom of the backstrap is marked “108 / 788”. The inside face of the loading gate is marked with the assembly number “6481”. The rear face of the cylinder is marked “L”. The left underside of the barrel about ¾” from the frame is marked “44” and the left front of the trigger guard is marked “44.CF”.
Barrel Length: 5 ½”
Sights / Optics: The front sight is a tall quarter round blade fixed to the barrel. The rear sight is a “V” groove in the top strap.
Stock Configuration & Condition: The one piece grip is smooth walnut with an oiled finish. There are a few light compression marks in the bottom half of the left grip. The right side of the grip shows a few light handling marks and four very shallow compression marks near the top. There is a slight gap between the top front of the right side of the grip and the frame. The grip rates in about Fine condition.
Type of Finish: The revolver was originally nickel plated. There are only remnants of the original finish remaining.
Finish Originality: The finish is original.
Bore Condition: The bore is dark and the rifling is sharp. There is a ring of erosion about 1 ½” from the muzzle.
Overall Condition: This revolver retains about 0% of its metal finish. The only part of the revolver with any finish remaining is the ejector rod housing which shows traces of its original finish. All surfaces except the bottom three fourths of the backstrap show pitting and marks from grinding/sanding. The top of the barrel shows numerous compression marks and there are a few deep marks that could be tool marks from a vice. There is a deep compression mark at the right front of the frame and a compression mark on the outside of the left “ear” at the top of the backstrap. There is also an area of shallow compression marks in the middle of the front strap. The cylinder shows a groove in the metal for a drag line and the edges of the bolt stop cuts are all rounded-off. The hammer checkering and screw heads are disfigured. Most of the markings have been ground off. Overall, this revolver rates in about Poor to Fair condition.
Mechanics: The action functions properly, but the bolt doesn’t always stop the cylinder with a chamber in line with the barrel. If the hammer is cocked very slowly, the cylinder locks up correctly with very little play. If the hammer is cocked swiftly, the cylinder over rotates a degree or two – the bolt stop cuts in the cylinder are too worn to properly engage the bolt. The trigger pull is crisp. We did not fire this revolver. The ejector rod has a crescent shaped button correct for the 1880 time frame.
Box, Paperwork & Accessories: This revolver comes with a letter from the Colt Historian indicating that this revolver was one of five shipped to Winchester Repeating Arms in New Haven, CT. on June 28, 1884, and that it was made with a nickel finish. The letter is in Excellent condition.
Our Assessment: This is a Colt 1st Generation, Intermediate Blackpowder Frontier Six-Shooter in .44-40 Winchester. The frame, trigger guard and backstrap all have identical serial numbers, but most of the markings on the barrel and frame have been ground or polished away. The revolver doesn’t show any of its original finish except for a few remnants left on the ejector rod housing, while most of the gun is covered with pitting. The bolt stop cuts in the cylinder are worn and don’t always stop the cylinder correctly when the hammer is cocked swiftly. The .44-40 cartridge was developed by Winchester for their 1873 lever action rifle and it was so popular that Colt introduced it in 1877 in their 1873 Model P revolver as the Frontier Six-Shooter model (to distinguish it from the Single Action Army in .45 Colt). The .44-40 chambering was very popular because it allowed the cowboys and others in the “Old West” to carry only one caliber of ammunition, which could be used in both pistols and rifles. This revolver has seen a lot of use, and we can only imagine why Winchester bought it. Perhaps it was to make up five pairs of rifles and pistols for presentations or as special promotions? The pistol has finish issues, and the cylinder lockup is mechanical issue – still, Colt collectors are always looking for unusual guns, and this one bought by Winchester is certainly unusual. One can only guess as to where it went after Winchester.