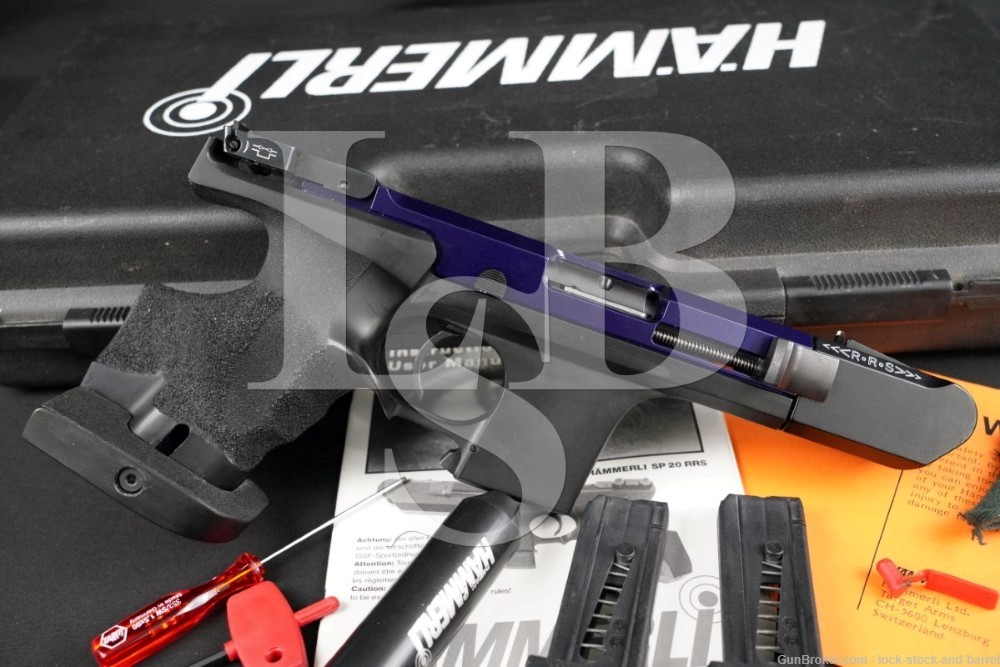 Sights/ Optics: The front sight is a rotatable, triangular post with different diameter faces that has been painted white. The rear sight is a square-notch adjustable for windage and elevation which is fixed to the rear end of the frame. The top of the slide has been drilled and threaded to allow the installation of an accessory (no accessory is installed or included).

Stock Configuration & Condition/ Grip: The target style grip is stippled one-piece black synthetic featuring a thumb rest on the left side and is adjustable. The grip has some light handling marks, nicks and scuffs. Notably, there is some discoloration on the thumb rest. There are no rips or tears. Overall, the grip is in Very Good condition.

Bore Condition: The bore is mostly bright with sharp rifling. There is some light erosion concentrated at the center of the bore.

Overall Condition: The pistol retains 95% of its metal finish. There are some light handling marks, nicks and scuffs. Notably, there is some wear where the safety notch engages. The markings remain clear. Overall, the pistol is in Very Good plus condition.

Box Paperwork and Accessories: The gun comes with its serial matched case, a total of two 6-round magazines, a screwdriver, two hex wrenches, a dry fire chamber insert, a cleaning rod, a cleaning rod with multiple heads disassembled inside a case, a user manual, miscellaneous paperwork and another wrench with red grip.

Our Assessment: Hammerli was founded in Lenzburg, Switzerland by Johann Ulrich Hammerli in 1863. The company originally manufactured rifle barrels for the Swiss Army. Johann’s son Jeanot took over the company in 1876 and partnered with Johann Hausch to form Hammerli & Hausch. The company’s name changed again in 1921 to Rudolf Hammerli & Co. until 1946 when Rudolf passed away and it became Hammerli & Co. AG. until 1971 when it was acquired by SIG. The company gained a reputation for manufacturing some of the highest quality competition handguns on the market. Finally, in 2006 the company was acquired by the German company Umarex which also owns Walther and Rohm Gesellschaft. This gun was manufactured, and imported, before the company was taken over by Umarex hence the marking which indicates the gun was made in Switzerland.

The SP-20 is a competition pistol which was originally introduced to the European market in 1998 before being imported into the United States in 2000. The gun is beautifully crafted with an impressive aesthetic and remains an ergonomic and mechanically sound option (more information on the gun can be found at the following link: http://www.nramuseum.org/media/364249/Oct%2099.pdf). This is a great option for competitive shooters. Good luck on your bid!