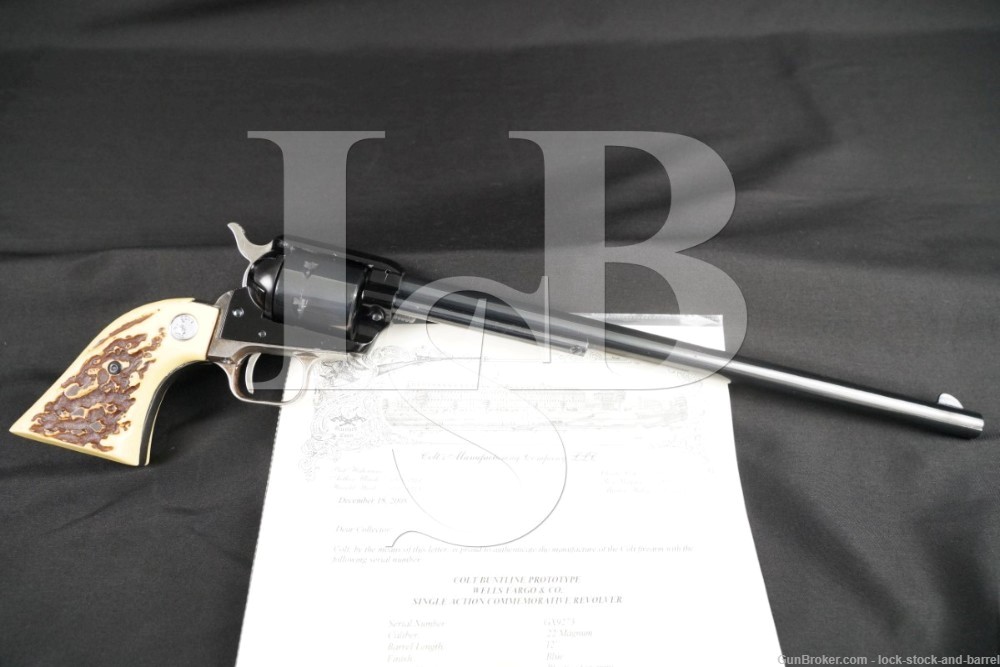 Caliber: .22 Long Rifle (the letter indicates it was chambered for .22 Magnum, but only a .22 LR cylinder is included)

Markings: The left of the frame has a circled rampant colt logo, the bottom-front is marked with the serial number. The butt is stamped “W.F.&Co.”.

Sights / Optics: The front sight is a quarter-round blade fixed to the front of the barrel. The rear sight is a square notch at the rear of a groove in the topstrap.

Stock Configuration & Condition: The grips are two-piece faux-stag plastic panels with silver-colored Colt medallions. The grips have some minor nicks and scuffs, but no notable damage. There are no chips or cracks. Overall, the grips are in Fine condition.

Overall Condition: This revolver retains about 92% of its metal finish. There is scattered wear and discoloration in the grip frame’s silver finish, most notable in the backstrap and on the sides. There are scattered minor nicks and scratches. The action shows operational wear including a turn-line on the cylinder. The screw heads range from sharp to lightly tool marked with strong slots. The markings are clear. Overall, this revolver is in Very Good condition.

Mechanics: The action functions correctly. The cylinder lockup shows very little play. The trigger pull is crisp. The frame has a hole to pin the barrel in place, but no pin is present. The barrel does not appear to be cut for a pin, we believe that the frame used was already drilled for a pin, but either the final design was not intended to be pinned or the barrel was never cut for it (this is a prototype revolver). We did not fire this revolver. As with all used firearms, a thorough cleaning may be necessary to meet your maintenance standards.

Box, Paperwork & Accessories: This revolver comes with a Colt Archives letter which confirms that this revolver was produced as a Buntline Prototype Wells Fargo & Co. Single Action Commemorative Revolver with a 12″ barrel and plastic stag grips. The letter states that the revolver was chambered for .22 Magnum, but only a .22 LR cylinder is included.

Our Assessment: Colt has produced a kaleidoscopic variety of commemorative firearms throughout the years, but it’s fairly scarce to see the ones that were never offered. This is an example of one such prototype commemorative. The issue was to be made up of Frontier Scout Buntline revolvers with 12″ barrels to commemorate Wells Fargo & Co., who had not only been a customer of Colt’s, but is also an icon of the American Frontier, having provided express banking and mail service to the expanding nation. While the commemorative would never come to pass, there was a prototype made, and this is it!

According to the included Colt letter, this revolver was actually marked with the same roll-die used for pre-World War II production firearms ordered by W.F. & Co. and remained in the Colt factory until it was auctioned off in 2008. The Colt serial lookup indicates that this prototype was made in 1998, perhaps indicating that the commemorative was intended to be released in 2002 for the Wells Fargo Sesquicentennial. As a prototype, its 12″ barrel has no markings and while the frame is drilled for a barrel pin, the barrel is not. Interestingly, the letter indicates that the revolver was chambered for .22 Magnum, but it is equipped with a cylinder chambered for .22 Long Rifle instead. This factory prototype would be a great addition to a Colt collection, as well as a nice find for collectors of Wells Fargo memorabilia. Please see our photos and good luck!