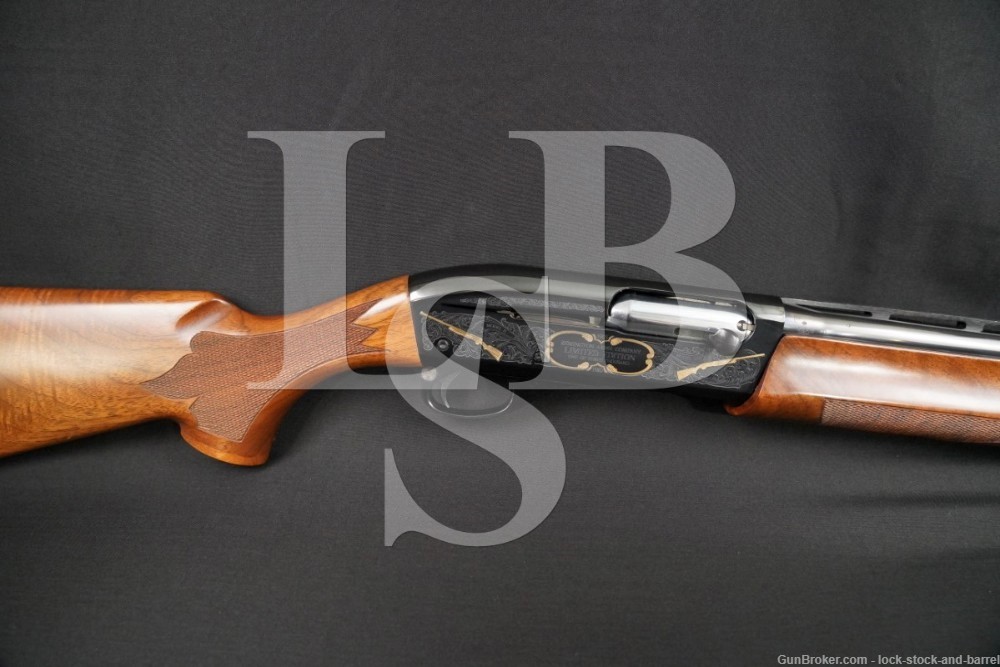 Markings: The left side of the receiver is marked “Remington MODEL 1100” along the bottom edge at the front and with the serial number along the bottom edge at the rear. The left of the receiver has scroll engraving at the front surrounding a man in a wooded area holding an 1100 and using a game call, at the center the left side has scroll engraving with gold plating depicting two men in a canoe hunting waterfowl, at the rear there is scroll engraving and a banner that reads “DIAMOND / ANNIVERSARY”. The right side of the receiver is marked with scroll engraving and has a Model 11 in gold at the rear below a banner with the words “MODEL 11”, in the center it has gold bordered markings that read “1905 / REMINGTON ARMS COMPANY / LIMITED EDITION / ONE OF THREE THOUSAND / 1980”, at the front it is marked with a gold Model 1100 under a banner with the words “MODEL 1100”. The left side of the magazine tube mount of the barrel is matched and marked “1114”. The left side of the barrel is marked “12 GA. FOR / 2 ¾ IN. SHELLS”, “MOD.”, with an inspection mark, and “AB L”. The right side of the barrel is marked “REMINGTON ARMS CO. INC., / ILION, N.Y. MADE IN U.S.A.” and has a series of proof, inspection, and magnaflux marks.

Sights / Optics: The shotgun is mounted with a white bead front sight in a base set on the rib at the muzzle.

Stock Configuration & Condition: The stocks are press checkered walnut with a fluted straight comb, wood capped pistol grip, and finger groove forend. There are some compressions on the belly and on the comb. There is a little ding through the finish on the front of the pistol grip. There are a few faint marks on the forend. There are no chips or cracks. The checkering is sharp. The LOP measures approximately 13 7/8” from the front of the trigger to the back of the textured brown rubber Remington buttpad. The pad has some scattered wear and discoloration. The stocks rate in about Fine Plus overall condition.

Overall Condition: This shotgun retains about 98% of its metal finish. There are a few light marks on the metal, the most noticeable are on the top of the receiver at the rear. There are light handling marks. The markings are strong and clear. The pinheads are unmarred. Overall, this shotgun rates in about Excellent condition.

Mechanics: The action functions correctly. We did not fire this shotgun. As with all used firearms, a thorough cleaning may be necessary to meet your maintenance requirements.

Our Assessment: Designed by Wayne Leek and Robert Kelley, the Remington Model 1100 was introduced in 1963 as a successor to the model 58 and 878 gas-operated shotguns. The Model 58s had supplanted the recoil operated Model 11-48, which retained the long recoil action of John Browning’s original design, present in the Remington Model 11 and the Auto-5. All models of the 1100 are gas operated with a mechanism that noticeably reduces recoil. The Remington Model 1100 ushered in the era of successful and reliable gas-actuated autoloading shotguns, and it is the best selling autoloading shotgun in U.S. history. The Model 1100 holds a record for shells fired out of an autoloading shotgun without malfunction, cleaning, or parts breakage with a record of over 24,000 rounds. The record was set in 1978 with a Remington model 1100 LT-20. Breaking this record has been attempted with several other models of semi-auto shotguns with no luck. This one is their Diamond Anniversary Model with a limited edition engraved receiver, grade II walnut stocks, and a 28″ vent rib barrel. Remington only made 3000 of these so now is the chance to get one in Excellent condition. Please see our photos and good luck!