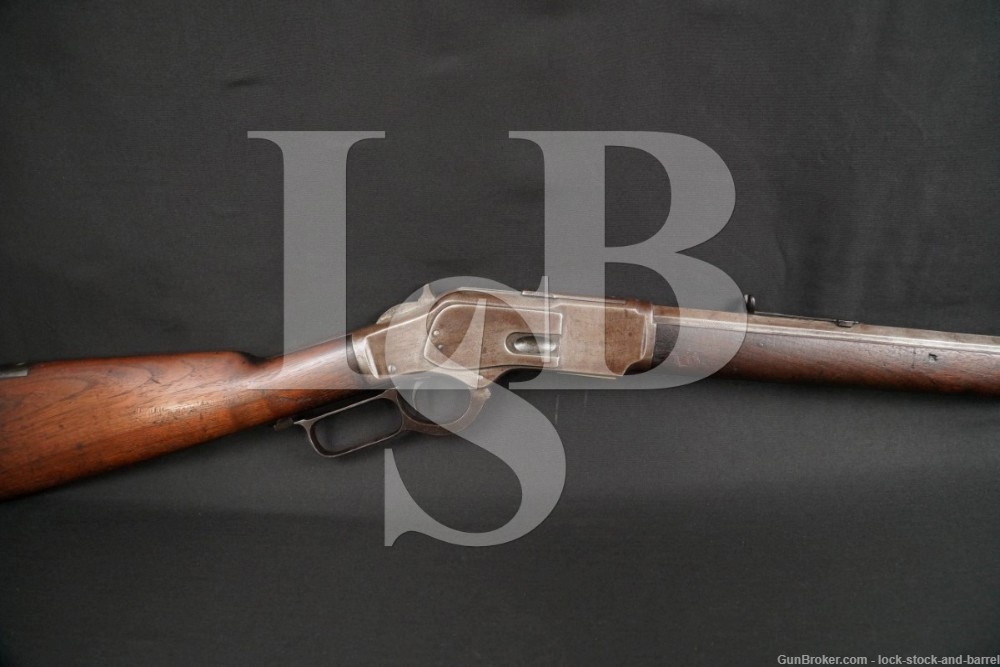 Sights / Optics: The front sight is a blade in a slotted base dovetailed to the front of the barrel. The blade does not appear to be original as the slot has been modified to hold it. The rear sight is a “V”-notch semi-buckhorn elevator sight dovetailed to the rear of the barrel. The notch is fine-adjustable for elevation, but the sight’s elevator is missing. The top tang is drilled, tapped and filled for a peep sight (none included).

Stock Configuration & Condition: The stocks are two-piece smooth walnut with capped forend, straight grip, straight comb and steel crescent-style buttplate with a sliding door over a storage compartment (there is nothing stored in the compartment). The stocks have several scattered nicks, dings, scuffs and scratches, more in the buttstock than the forend. There are no chips or cracks. The LOP measures 12 5/8″ from the front of the trigger to the back of the buttplate. The plate has has gone to a light-moderate patina with scattered erosion, heaviest at the heel and toe. Overall, the stocks are in Good-Very Good condition as refinished Antique.

Bore Condition: The bore is dark gray. The rifling is worn, but visible. There is scattered light-moderate erosion and light pitting in the bore with a couple of spots of more notable pitting.

Overall Condition: This rifle retains about 3% of its metal finish. The surfaces have almost completely worn to white or gone to a light patina with infrequent spots of remaining finish. There are scattered spots of light surface oxidation and minor erosion. There are some scattered light nicks, scuffs and scratches. There are more notable nicks on the bottom-left of the barrel at the magazine bracket, on and around the bottom of the lifter, and there is a notable dent in the bottom of the magazine tube which interferes with the follower, about 4″ in front of the forend. The hammer spur has broken off or been intentionally removed, the rear face has been filed smooth. The single set-trigger is missing its adjustment screw and there is erosion on the hole for the screw which may require work to install a new screw. The action shows operational wear. The screw heads range from sharp to tool marked with strong slots. The markings range from clear to worn, but legible. Overall, this rifle is in Fair-plus condition as Antique (see Mechanics).

Mechanics: The hammer does not properly catch the sear. The single set trigger is missing its adjustment screw, and there is erosion on the hole for the screw which may require work to install a new screw. There is a dent in the magazine tube which interferes with the magazine follower. There is a lever lock on the lower tang, and a dust cover on a rail on the receiver, typical of the Third Models. We have not fired this rifle. As with all used firearms, a thorough cleaning may be necessary to meet your maintenance standards.

Our Assessment: One of the most successful, and certainly one of the most famous Winchester rifles was the Winchester Model 1873, known as “The Gun that Won the West” for its predominant role in the hands of Western settlers. The Model 1873 had a steel frame that was much stronger than the brass framed Model 1866, allowing Winchester to develop a family of powerful new cartridges, with Colt usually producing Single Action Army revolvers in the same calibers shortly after they were developed. The .32-20 Win. cartridge was a very popular cartridge in its day which would put food on the table, protect livestock and defend hearth and home. It was once a favorite with farmers, ranchers, pot hunters and trappers. This Model 1873 rifle shows its age, but looks better than any of us will at 130 years old! The rifle has some mechanical issues which will need to be addressed before it is fully functional, but would certainly display well now with its been there, done that appearance. It would also be a great candidate for restoration with its single set-trigger. Please see our photos and good luck!