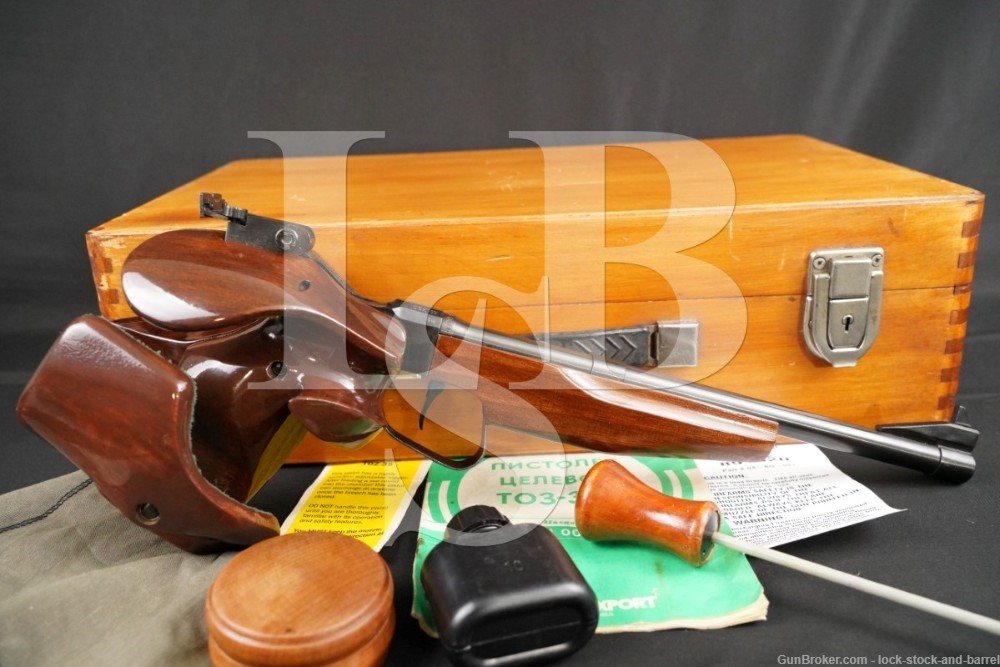 Barrel Length: The barrel is 11.75” in length and has a recessed target crown.

Sights / Optics: The front sight is a tall post style blade fixed to a slot on the top of a serrated ramped banded base. The blade is secured with a set screw in the front of the base. The rear sight is a wide flat-topped notched target sight attached to the rear of the receiver. The leaf in the rear sight is reversible, with a “U”-notch on one surface and a square notch on the other. The sight has serrated knobs to allow adjustments for elevation and windage.

Stock Configuration & Condition: The stocks are four piece smooth wood featuring a forend and a three piece-piece adjustable pistol grip with a thumb hole on the left side and finger grooves on the right. The concealed portion of the grip is lined with green felt to cushion the user’s hand when operating the handgun. The stocks have a few light handling marks, nicks and scuffs. Notably, the felt liner has a small spot that has torn off at the bottom right portion of the grip. There are no chips or cracks. Overall, the stocks are in very Good-Fine condition.

Mechanics: The action functions correctly. The gun has been configured with a hair trigger, but it can be adjusted to the user’s preferences. To operate the handgun a lever situated inside the grip is used to move the breechblock so that a round can be chambered, the lever is then used to replace the breechblock, a lever on the left side of the frame is depressed to activate the action and the trigger is depressed to fire the gun. We did not fire this handgun. As with all used firearms, a thorough cleaning may be necessary to meet your maintenance requirements.

Box, Paperwork & Accessories: The gun comes with a wood box that has a target logo on the handle and an Air France stamp, a instruction manual in Russian that indicates the gun was made in 1989, a soft case for the pistol, a wood container with spare parts, a black plastic oil container, several cleaning brush heads and a tool set.

Our Assessment: The TOZ-35M was invented by Yefim Leontievich Khaidurov, an accomplished Soviet weapons designer and professional shooter. Born in 1925, Khaidurov who came from Buryatia was conscripted into the Red Army in 1943 and served as a cryptographer for the General Staff. He left the Red Army in 1948 and entered the Moscow Mechanical Institute and later completed his education at the Bauman Moscow State Technical University. He began to work on developing ingenuitive target pistols, but he was not simply a designer he was also a champion shooter himself. He won a number of World, European, Soviet and Soviet Armed Forces shooting championships. Among his many inventions was the TOZ-35 which he completed in the early 1960s. He would later coach Soviet (and later Russian) competitive shooters (videos narrated by Khaidurov in the 1980s can be viewed at the following links: https://www.youtube.com/watch?v=-U2YcA1bZlQ  & https://www.youtube.com/watch?v=ppl_zjRdvpY). He would pass away in 2012, having lived a very accomplished life as a competitive shooter and firearms inventor.

This TOZ-35M is fully assembled and mechanically sound. While in its current configuration the gun has a hair-trigger, it can be adjusted to your preferences. This is a gun made by a lifelong professional shooter and it will make a great option for free shooting enthusiasts. Good luck on your bid!