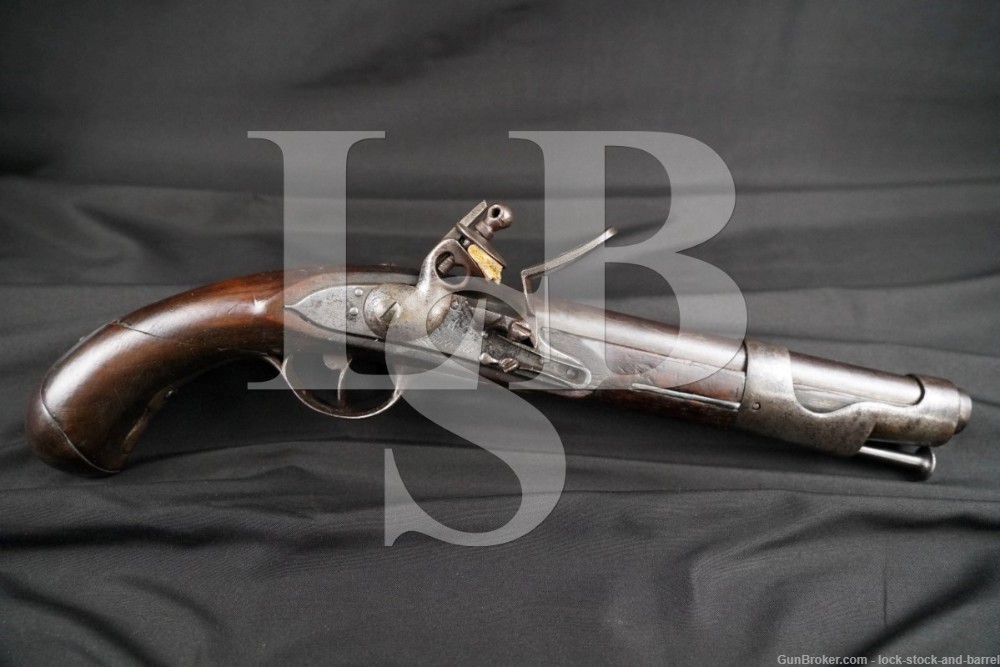 Stock Configuration & Condition/ Grip: The stock is wood with a metal nose cap secured by a spring, a slot in the forend for the included ramrod, a side-plate, a lock-plate and a pistol grip with metal cap. The stock has moderate handling marks, nicks and scuffs. Notably, there is a pin between the side-plate and nose cap, two pins are installed just behind the side plate and there is a crack that circuments the center of the grip which is patch repaired with two pins covered in wood filler. Also, there is a crack on the left and right sides of the forend which are both visible through a gap on the nose cap, there is a light crack between the rear screw of the side-plate and chamber, a light crack extends from the rear of the side-plate onto the stock, a moderate crack extends from the nose-cap onto the bottom of the forend, there is a patch repaired ding on the left side of the grip at the cap and there is a crack at the bottom front portion of the lock-plate that curves onto the bottom of the forend. Overall, the stock is in Good condition for an Antique.

Bore Condition: The bore is dark with scattered heavy erosion and pitting.

Overall Condition: The pistol has no metal finish. The metal parts of the gun are coated in light surface oxidation and have taken a patina color. There are light-moderate handling marks, nicks and scuffs. Notably, there is some scattered light pitting concentrated on the lock-plate and nose-cap. The marking on the lock-plate is lightly obscured by oxidation and the one on the trigger guard is poorly stamped, otherwise the markings remain clear. The screwheads have light tool-marks and remain serviceable. Overall, the pistol is in Good condition for an Antique.

Mechanics: The half-cock safety does not engage. Otherwise, the action functions correctly. We have not fired this pistol. As with all used firearms, a thorough cleaning may be necessary to meet your maintenance requirements.

Box Paperwork and Accessories: There is a ramrod included with the pistol which is secured in the forend.

Our Assessment: This is a French Pistolet Modèle 1763/66 Cavalrie which was manufactured during the French Revolutionary-era. The French Revolution broke out in 1789 with the Monarchy abolished in 1792 and King Louis XVI executed in early 1793. The new government became increasingly radical and was briefly dominated by the Jacobins under the tutelage of Maximilien Robespierre whom initiated a Reign of Terror that resulted in thousands of executions. During this period the Jacobins attempted to completely restructure French society including the establishment of a new state religion, but they began to lose political capital quickly and were ultimately overthrown during the Thermidorian Reaction of 1794. It was during this brief period that French made arms were labeled Libreville (paying homage to the revolutionary motto “Liberté, Egalité, Fraternité”) but the practice ended soon thereafter. During this period of deep social unrest France became embroiled in military conflicts with its neighbors which would persist until Napoleon’s defeat at Waterloo in 1814.

The Pistolet Modèle 1763/66 is a cavalry pistol. The gun was designed following France’s bitter defeat in the Seven Years War when a modernization effort was pursued by  Etienne Francois, Marquis de Stainville, Duc de Choiseul (commonly referred to by his title Duc de Choiseul) during the reign of Louis XV. The gun would enter service in 1763 and remain in use until the beginning of the 19th century.

This pistol comes from the chaotic early years of Jacobin rule which were dominated by brutal military conflicts between France and neighboring powers. The “Libreville” marking is rare, this is a great opportunity to acquire one of these more uncommon French handguns. This specimen has wear consistent with a weapon that was made well over 200 years ago, but it retains its original charm. This is a great option for collectors of Napoleonic-era items and Historical firearms. Good luck on your bid!