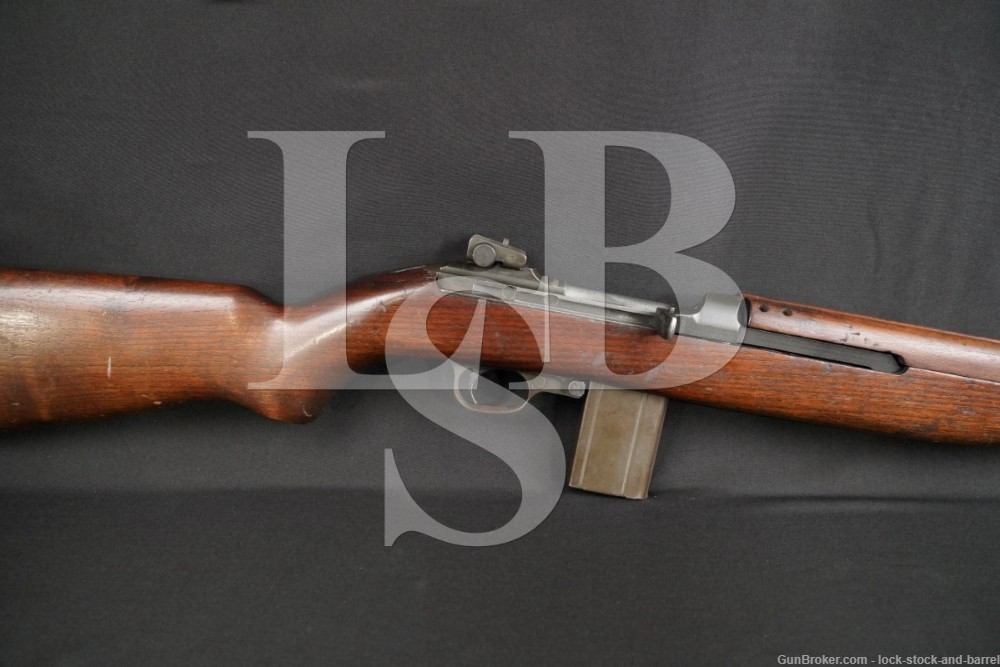 Sights / Optics: The front sight is a bladed post set between 2 protective wings. The rear sight is a Type III adjustable aperture aperture.

Stock Configuration & Condition: The two piece hardwood stock has a pistol grip, Type III barrel band with sling loop, sling well, sling pass through, and metal buttplate. The buttplate shows small scrapes & scratches and discoloration from oxidation. The barrel band shows thinning and surface erosion. The base of the grip, sling well and oiler cut out are each missing edge chips of wood. The wood shows numerous scrapes, scratches and compression marks. Several have damaged small portions of the surface wood. The LOP measures 13 1/4 inches from the front of the trigger to the back of the buttplate. The stock rates in about Very Good overall condition.

Bore Condition: The lands are semi bright and the grooves are gray. The rifling is well defined; shallow at the muzzle. There is erosion at the muzzle and in the grooves. There are darker areas in the grooves which show heavier erosion and pitting. The bore shows an M.E. of greater than 5; our gauge tops out at 5.

Overall Condition: This rifle retains about 80% of its metal finish. The metal shows scrapes, small scratches, thinning on the leading edges of the metal and discoloration from oxidation. The sides of the receiver and trigger group show areas of thinning under the wood. The barrel shows thinning, discoloration and light surface erosion under the wood. The receiver and bolt show operational wear. Many of the markings are deep. Overall, this rifle rates in about Good condition.

Box, Paperwork & Accessories: The rifle comes with a 15 round magazine. The magazine shows scrapes, discoloration and a shallow dent on the right front edge. It is in about Very Good condition.
The 15 round magazine is not available to residents of California or any other state with magazine capacity restrictions.

Our Assessment: The M1 Carbine was developed and produced after WWII started. Over 6 million were made by a number of U.S. companies to assist with the all out war effort. The M1 Carbine was widely issued to U.S. Military Forces which numbered over 16 million during WWII. The M1 Carbine contributed greatly to U.S. efforts during WWII.
The Underwood Typewriter Company was a manufacturer of typewriters headquartered in New York City, New York. By 1939, Underwood had produced five million machines. In 1927 the company was reorganized into Underwood-Elliott-Fisher, which later became the Underwood Corporation. During WWII Underwood was one of the many companies who helped with the war effort. They produced about 8.9% of the total number of wartime M1 Carbines.

This Underwood M1 Carbine was built back in 1944. It has been Arsenal rebuilt but we do not know where due to the lack of an Arsenal Rebuild stamping. The rebuild may have been done in a U.S. friendly county as the current Keystone stock was used as a replacement stock in Korea. The receiver is stamped with the serial number in two places. This was done during Arsenal Rebuilds when a new rear sight was installed that blocked (all or partially) the original serial number.
This Underwood M1 Carbine  has seen some use but it should be a blast out at the range. Good luck.