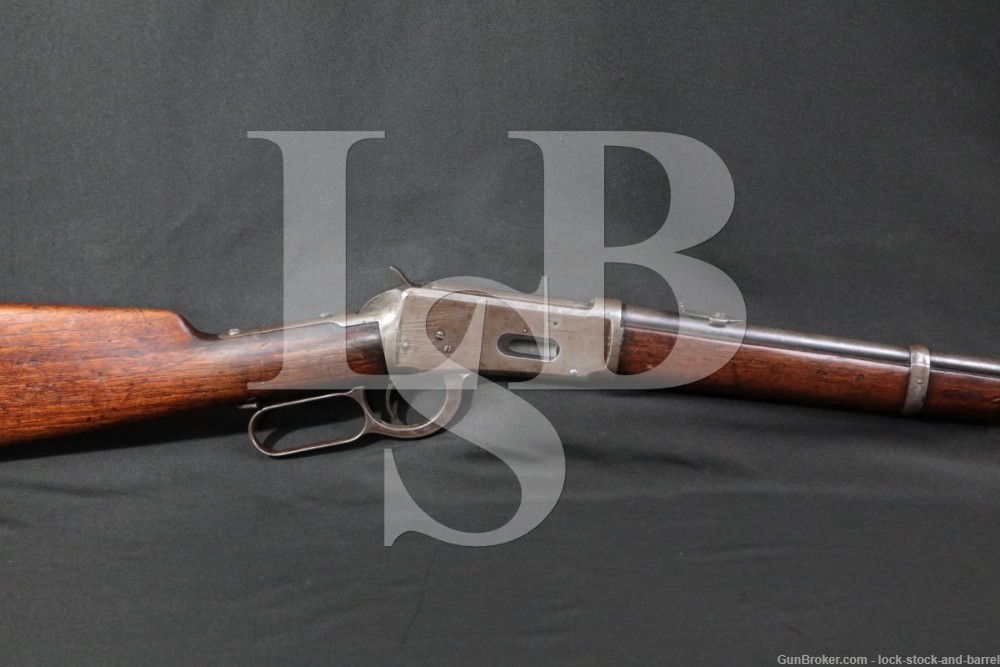 Sights / Optics: The front sight is a blade pinned in a slotted base fixed to the barrel behind the front band. The rear sight is a “V”-notch dovetailed and screw-set to the rear of the barrel. The rear sight appears to have been modified from a different design, not original to the gun. The top tang is drilled, tapped and filled for a tang sight (none present).

Stock Configuration & Condition: The stocks are 2-piece smooth walnut with banded forend, straight grip, straight comb and steel carbine-style buttplate. The stocks have scattered nicks, dings, scuffs and scratches, most fairly light but some more notable. There are cracks around the front edges of the wrist and the rear edges of the butt with a couple of much longer grain-line cracks on the right-rear. The LOP measures 13″ from the front of the trigger to the back of the buttplate. The plate has mostly worn to white with scattered discoloration from oxidation, some minor erosion, nicks and scratches. Overall, the stocks are in about Good-plus condition as refinished Antique.

Bore Condition: The bore is dark gray. The rifling is worn, but visible. There is light-moderate erosion and light pitting scattered through the bore.

Overall Condition: This rifle retains about 5% of its metal finish. The finish remains only in protected areas such as the bottom of the barrel, the top of the magazine tube and portions of the lever assembly concealed when the action is closed. Other surfaces have mostly gone to a light patina or worn to white. There is scattered minor surface oxidation and some minor surface erosion. There are scattered light nicks, scuffs and scratches with more notable scraping on the bottom tang. The top tang has cracks to each side of the hammer slot at the rear. The cracks don’t quite extend to the edges of the tang, but are pretty close. The saddle ring has sheared off. There is a square nut on the bottom tang which the replacement stock mounting screw is threaded into. The screw filling the front hole for the tang sight mount appears to be a mounting screw. The screw heads range from sharp to disfigured with useable slots. The markings range from clear to worn, but legible. Overall, this rifle is in Fair-plus condition as Antique (see Mechanics).

Mechanics: The action functions correctly, however the cracks in the top tang should be addressed prior to firing. The hammer has a half-cock safety and a lever safety is present, though it is not functioning properly. The lever lock-ups properly and the trigger is crisp. We did not fire this rifle. As with all used firearms, a thorough cleaning may be necessary to meet your maintenance standards.

Our Assessment: This is an early Winchester Model 1894 Carbine made in 1897. The Winchester Model 1894 was the first commercial American repeating rifle built to be used with smokeless powder. The 1894 was originally chambered to fire 2 metallic black powder cartridges, the .32-40 Winchester and .38-55 Winchester. In 1895 Winchester went to a different steel composition for rifle manufacturing that could handle higher pressure rounds and offered the rifle in .25-35 Winchester and .30-30 Winchester. The 1894 chambered for .30-30 would go on to become synonymous in America with “deer rifle”, and they have been used for more than a century to harvest game all across the country. This early example has honest wear consistent with use in the field over the last 125 years. There are cracks in the top tang to each side of the hammer slot, but it otherwise is in good shape mechanically. This early Winchester M1894 carbine may interest the Winchester collectors with its “been-there, done-that” appearance, but would also be well worth restoring and getting back out in the field. Please see our photos and good luck!