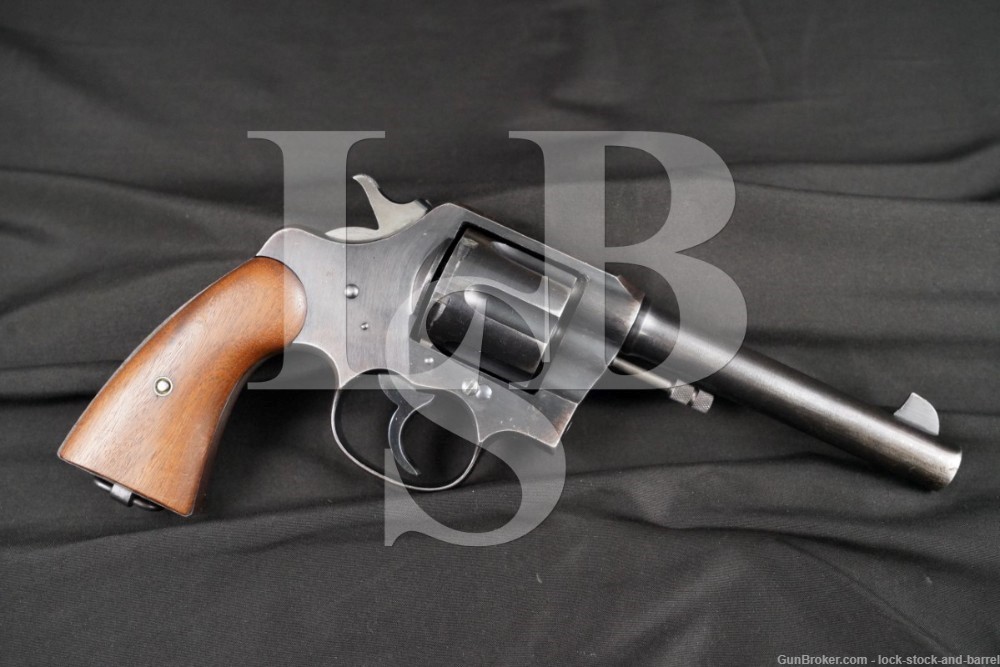 Stock Configuration & Condition: The grips are two-piece smooth wood panels. The grips have light handling wear with a few scattered light marks. There are no chips or cracks.  The grips are quite thin and have been sanded down noticeably. Overall, the grips are in Good-Very Good condition as refinished.

Overall Condition: This handgun retains about 70% of its current metal finish. The finish is thinning at all edges. The most notable finish loss is in the grip areas with lighter wear along the sides of the barrel, behind the cylinder flutes and in some areas of the frame. Most worn areas show discoloration from oxidation. There are some scattered light nicks, scuffs and scratches. The action shows operational wear including a turn-line on the cylidner. The screw heads range from sharp to tool marked with strong slots. The markings range from clear to worn and incomplete. Overall, this revolver is in about Very Good condition as Arsenal Refurbished.

Box, Paperwork & Accessories: None.
Our Assessment: With America’s entry into WWI, it was found that Colt could not produce enough Model 1911 pistols for the U.S. Army. Some .38 revolvers were distributed to rear echelon troops, guard, and the Navy, but the Army also wanted some commercial revolver production to be used for a revolver capable of using the same ammunition as the 1911 semi-auto. Both Smith & Wesson Hand Ejector and Colt New Service revolvers chambered for .45 ACP were approved as substitute standard and designated the Model 1917. Colt’s M1917 was built on the same large frame as the Colt New Service revolver, making for a very rugged service revolver.

This example has been through an Arsenal Overhaul, as evidenced by the assembly numbers on the barrel, frame, crane and cylinder, ensuring that the fitted parts were assembled together after the new finish was applied. According to records from the Springfield Research Service, this revolver was returned to Springfield Armory December 31, 1921 from the United States Post Office, where it was likely issued during the Great War. After the war, many of these revolvers were returned to arsenals and refurbished, and many would be re-issued during WWII for much the same purpose.

This example is in Very Good condition with the majority of its new blued finish remaining, a decent bore and strong mechanics. A nice example of Colt’s Model 1917 revolver, this will add to a Great War small arms, Colt or early 20th Century revolver collection, especially as it is documented and a little more is known about its history. Please see our photos and good luck!