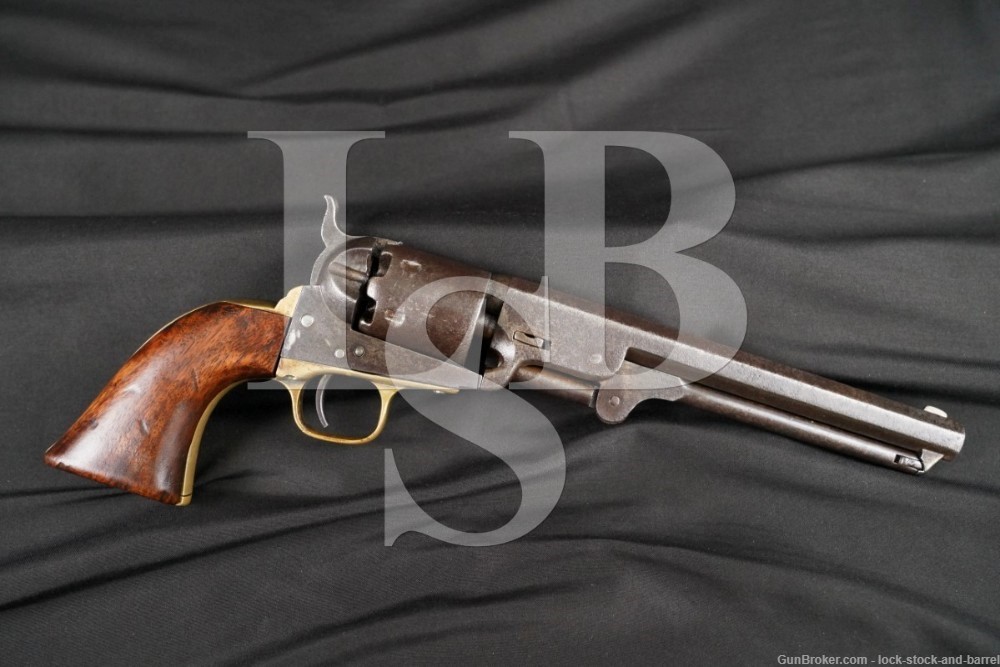 Stock Configuration & Condition: The grip is one-piece smooth walnut. The grip has scattered nicks, dings, scuffs and scratches with several dings on the bottom face. There are no chips or cracks. The grip is refinished and/or not original to the gun. Overall, the grip is in Very Good condition as Antique.

Finish Originality: Very little finish remains, but there is no sign of refinishing. The wedge is not original to the gun.

Bore Condition: The bore is dark with well defined rifling. There is moderate erosion and light-moderate pitting scattered through the bore.

Overall Condition: This revolver retains about 3% of its metal finish. There is a little bit of discolored silver in protected areas on the grip frame, with some stronger silver on the portions of the grip frame covered by the grip. The steel surfaces have gone to a moderate patina with fairly even light erosion throughout and some areas of more moderate erosion. There are several light nicks, scuffs and scratches, including concentrations around the wedge on each side of the barrel assembly. The loading lever’s pivot screw appears to have been replaced with a pin which is peened on each side. The nipples show moderate-heavy wear, but the flash-holes are not obstructed. There is similar wear on the nose of the hammer. Most of the screws appear to be replacements, with the slots ranging from sharp to disfigured with usable slots. The markings range from clear to worn and incomplete. Overall, this revolver is in about Fair condition (see Mechanics).

Mechanics: The cylinder stop does not properly disengage, the hammer cannot be cocked because the stop prevents the cylinder from advancing. When the cylinder is removed, the hammer catches properly at the safety and half-cock notches, but does not properly catch at full-cock. The cylinder lockup has little side-to-side play but moderate end-shake. The barrel assembly has no play to the frame. The nipples have moderate-heavy wear but the flash holes are not obstructed. We have not fired this revolver. As with all used firearms, a thorough cleaning may be necessary to meet your maintenance standards.

Our Assessment: The Colt 1851 Navy revolver was produced by Colt up until 1873 when Colt cartridge revolvers were introduced. It got its name from the Navy battle scene on the cylinder that Colt added to commemorate the victory of the Second Texas Navy at the Battle of Campeche in 1843. Texas had previously ordered the Colt Paterson revolver, Colts first big success, and Colt wished to show gratitude. The 1851 Navy was carried as a belt gun by armies on both sides in the Civil War and was a favorite of General Robert E. Lee. This revolver is a Colt Model 1851 made in 1867, a couple of years after the war ended. This revolver certainly shows its age, and we only wish it could tell us its story. It will make a nice display piece with other 19th Century small arms or a good candidate for restoration. Please see our photos and good luck!