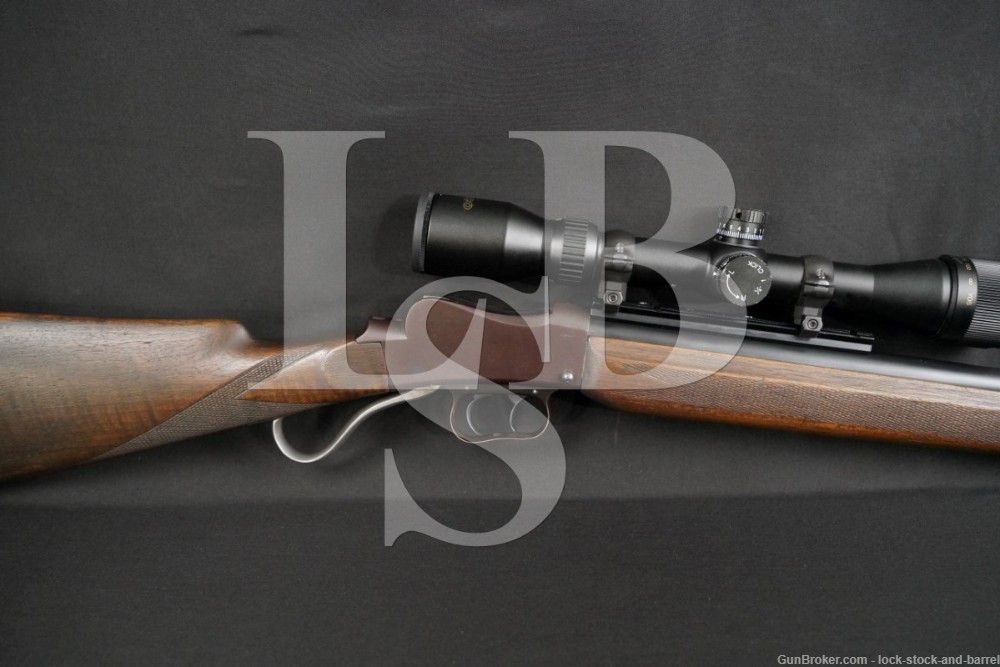 Sights / Optics: The barrel has no provision for iron sights, but the receiver has an integral mount at the top-rear for a rear sight (none present). There is a Weaver-style rail installed on the top-rear of the barrel with rings holding a Tasco 3-9×32 scope with duplex reticle. The body of the scope shows faint wear and the glass is fairly clear.

Stock Configuration & Condition: The stocks are two-piece checkered walnut with a semi-beavertail forend, straight grip, straight comb and serrated steel buttplate. There is a hole in the belly for a sling stud, but none is present. The stocks have some scattered light nicks, scuffs and scratches. There are tool marks around the forend mounting screw. The comb has been sanded down some on the left side. The finish is thinning at the heel. The checkering is generally well defined. There are no chips or cracks. The LOP measures 14 1/4″ and 13 3/8″ from the fronts of the triggers to the back of the buttplate. The plate has scattered erosion under the finish with well defined serrations. Overall, the stocks are in Very Good condition as refinished.

Overall Condition: This rifle retains about 97% of its current metal finish. The finish is generally strong throughout with a few scattered light marks. There are small, square-shaped compressions around the barrel a couple of inches back from the muzzle, possibly tool-marks. The receiver’s finish has a plum hue. There are tool marks on the trigger guard around the trigger pins. The action shows light operational wear. The screw heads range from sharp to tool marked with strong slots. The markings are clear. Overall, this rifle rates in Very Good-Fine condition as customized.

Mechanics: The action functions correctly. The trigger must be set to fire, and it is light and crisp. We did not fire this rifle. As with all used firearms, a thorough cleaning may be necessary to meet your maintenance requirements.

Our Assessment: Perhaps best known today for their air rifles, the Weihrauch company, originally Hermann Weihrauch, Zella-Mehlis or HWZ, has a long history of arms making which goes back to 1899. One of their more popular cartridge rifles is the Model 21, released in 1921, which was designed as a Martini-action .22 LR target rifle. As with most Martini actions, it has also been used as the base for a wide variety of custom small bore target rifles, and this is one such example. The rifle’s barrel is chambered for .22 K-Hornet or Kilbourn Hornet. The cartridge was named for Lysle Kilbourn who was a prominent New York gunsmith. Kilbourn created this wildcat from the .22 hornet by moving the shoulder forward to increase case capacity and achieve higher velocities and greater energies than the original .22 Hornet. The cartridge still has a dedicated following among varmint hunters and when married with a small Martini action with double set-triggers, it makes for a very cool rifle. This will make a fine addition to any collection, especially for someone who appreciates and can reload the .22 K-Hornet cartridge. Please see our photos and good luck!