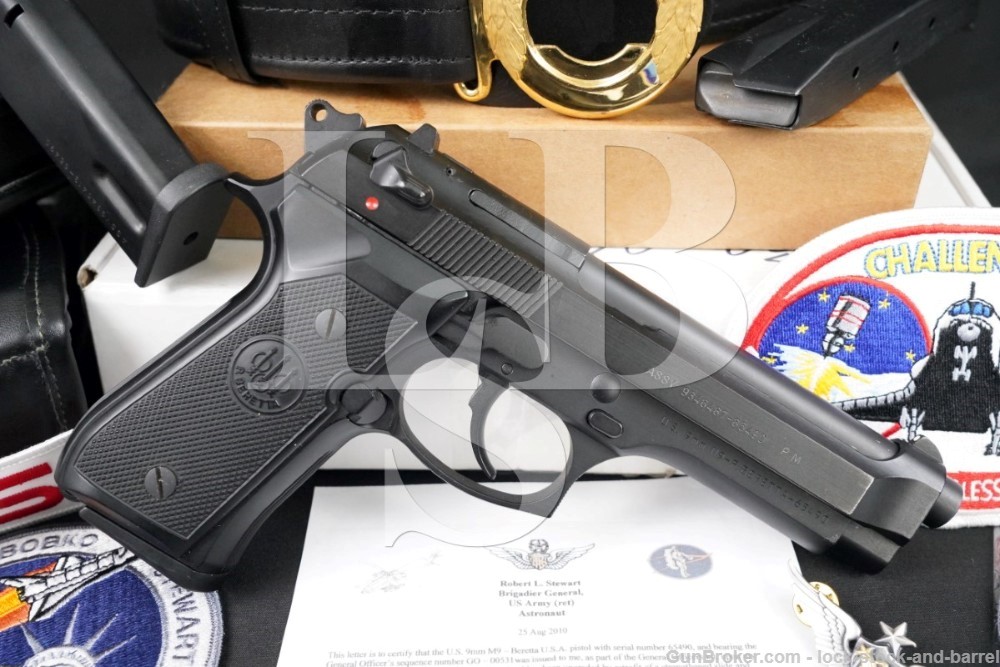 Sights/ Optics: The front sight is a blade with a recess for a white dot. The rear sight is a square notch with a white mark in the center dovetailed to the slide.

Stock Configuration & Condition/ Grip: The grip panels are two piece checkered black synthetic. There is a lanyard ring fixed to the butt-strap. The grips have a few scattered light marks, but no notable damage. The checkering is generally sharp. There are no chips or cracks. Overall, the grip panels are in Fine-Excellent condition.

Finish Originality: Original to the parts. According to the included documentation, the slide and hammer pivot-pin were replaced by Army armorers as part of a retrofit.

Bore Condition: The chrome-lined bore is bright with sharp rifling. There is no erosion in the bore.

Overall Condition: The pistol retains about 97% of its metal finish. The balance is mostly in minor operational wear and there are a few scattered minor nicks and scuffs. The markings remain clear. The screw slots range from sharp to lightly tool marked. Overall, the pistol is in Fine-Excellent condition.

Mechanics: The action functions correctly. The single-action trigger has a smooth takeup followed by a crisp break and the double-action is smooth. The slide to frame fit is snug. We did not fire this pistol. As with all previously owned firearms, a thorough cleaning may be necessary to meet your maintenance standards.

Our Assessment: We’re not going to waste a lot of time on the Beretta M9, adopted for service throughout the US Armed Forces in 1985 and only recently replaced by a striker-fired offering from Sig Sauer. We will briefly mention that the M9 was also selected for issue to General Officers around the same time. This General Officer example comes with a belt, holster and magazine pouch rig and was originally issued to Brigadier General Robert L. Stewart.

He was then assigned to the U.S. Army Aviation Engineering Flight Activity at Edwards Air Force base as an experimental test pilot where he participated in engineering flight tests of UH-1 (Huey) and AH-1 (Cobra) helicopters, U-21 (UTE) and OV-1 (Mohawk) fixed wing aircraft. He also was a project officer and senior test pilot on the YAH-64 Apache during competitive testing and worked with Sikorsky test pilots on development of the electronic automatic flight control system for the UH-60A Black Hawk. His military and civilian flight experience includes about 6,000 hours of total flight time in 38 types of airplanes and helicopters.

Then, he joined NASA and became an astronaut. After working on testing and evaluation of the entry flight control systems for STS-1, he was a support crewman for STS-4 and ascent/orbit CAPCOM for STS-5. He was then a mission specialist on the crews of STS-41-B (Challenger) and STS-51-J (Atlantis), logging 289 hours in space including about 12 hours of EVA. If you’re not impressed by that, he was also the 2nd astronaut to ever perform an untethered spacewalk, on the same mission as the first, following closely behind Bruce McCandless. His flight on STS-41-B made him the first active-duty Army officer to make a spaceflight, receiving the Senior Army Astronaut Badge which is included with the pistol.

Upon his promotion to Brigadier General, he was reassigned to US Army Strategic Defense Command where he managed research into ballistic missile defense technology and would later become the Director of Plans for US Space Command. Now retired, Stewart lives in Alabama and may still be seen occasionally at the U.S. Space & Rocket Center in Huntsville.

For the last several years, Stewart’s GO M9 has been in the collection of author Kevin Williams, and is featured prominently in his book “U.S. General Officer Pistols: A Collectors’ Guide”. Given the stellar career of its previous owner, its thorough documentation, and the included GO rig, this is not an opportunity to pass up. Please see our photos and good luck!