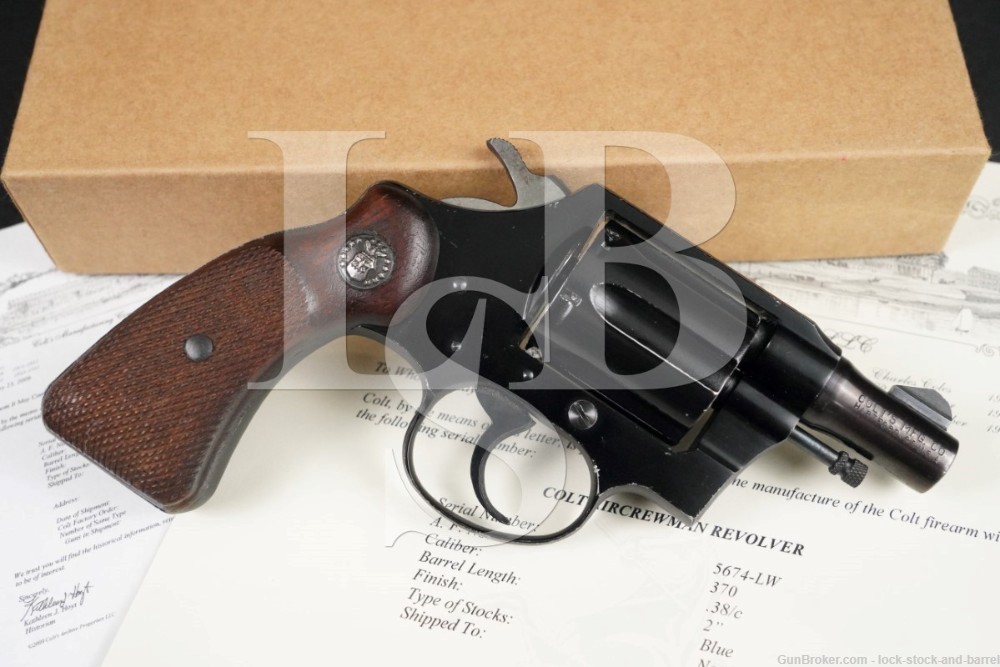 Sights / Optics: The front sight is a serrated ramped blade integral to the barrel. The rear sight is a square notch at the rear of the top strap. The edges of the sight groove in the topstrap are serrated for glare reduction.

Stock Configuration & Condition: The grips are two-piece checkered walnut with USAF medallions at their tops. The grips have minor handling wear with a few spots of discoloration. There are a few minor nicks and handling marks. The checkering is well defined. There are no chips or cracks. Overall, the grips are in Fine condition.

Overall Condition: This handgun retains about 93% of its metal finish. The finish is thinning at some edges, mostly on the cylinder and at the muzzle. There are some scattered minor nicks and a few scratches. There is erosion on the front and rear faces of the cylinder. There is some discoloration from oxidation on the unfinished side faces of the hammer. The action shows light operational wear. The screw heads range from sharp to lightly tool marked with strong slots. The markings are clear. Overall, this revolver is in about Good condition (see Mechanics, Our Assessment).

Mechanics: Due to the alloy construction of the cylinder, we do not recommend shooting this revolver. The cylinder tends to over-rotate on one chamber. Otherwise, the action functions correctly. The cylinder lockup has no play when the trigger is depressed. The double action trigger is smooth, the single action is crisp. We did not fire this handgun. As with all used firearms, a thorough cleaning may be necessary to meet your maintenance standards.

Box, Paperwork & Accessories: This revolver comes in a (modern) two-piece cardboard craft box with a Colt Archives letter indicating that this revolver shipped November 12, 1951 to the Transportation Officer, Air Proving Ground, Elgin Air Base in Crestview, Florida as one of 30 revolvers of the same type in the shipment.

Our Assessment: When the Korean War started in 1950, the US Air Force put out a call for lightweight, compact personal defense weapons they could issue to aircrews. Colt and Smith & Wesson, two of the largest and oldest revolver manufacturers in America, both submitted prototypes that used aluminum alloys in their designs. Fun Fact: While a common material today, aluminum was almost exclusively used in prototypes and one-off firearms prior to the 1950s. Oliver Winchester built a prototype shotgun with aluminum receiver plates as early as 1865, but the cost to purify and process aluminum was prohibitive back then.

After initial testing, orders were placed for 1,189 Colt and 1,210 S&W revolvers, each receiving their own Air Force numbers on the butt, with all 2,400 revolvers considered prototypes. The Air Force would adopt Smith & Wesson’s design and ordered over 40,000, though the initial 2,400 revolvers would also remain in inventory. These would arm aircrewmen as well as agents in the Office of Special Investigations. Unfortunately, the aluminum alloy that was so cutting edge and lightweight was also this product’s ultimate undoing. By 1959, many of the aluminum cylinders and frames of these revolvers showed significant breaks, cracks, and weaknesses, some units having ruptured altogether.

The Commanding Officer of the Air Materiel Command ordered that all Aircrewman revolvers be destroyed by mutilation and sold as scrap. Given their limited production, very few of the Colt Aircrewman revolvers escaped the crusher and torch. Author Kevin Williams noted in his Summer 2009 article in “The Rampant Colt” that he had been able to catalog only 50 surviving examples which were believed to be authentic. This example was photographed in the same article and in fact comes from the personal collection of Kevin Williams, best known for his exceptional work on the topic of General Officers Pistols & Clandestine Organization Pistols of WWII. These guns were the beginning of a revolution in gun materials, and this revolver, with its Colt Archives letter and connection with Mr. Williams is a great example of the Colt Aircrewman. Whether you’re a general firearms collector, military historian, or specifically a Colt fan, this revolver would improve any collection it joined. Please see our photos and good luck!