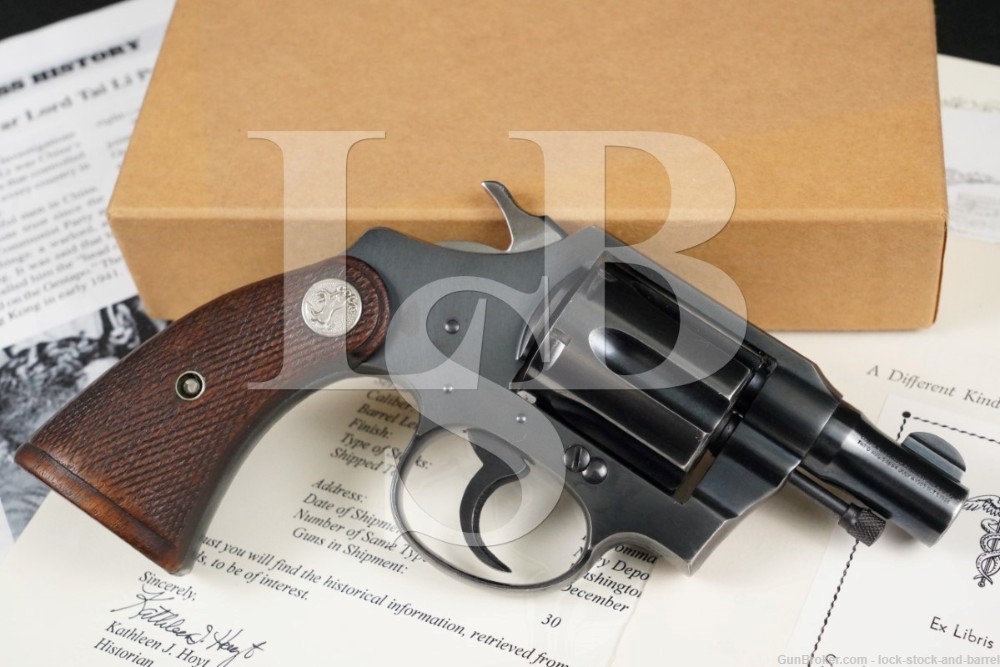 Stock Configuration and Condition: The grips are two-piece checkered walnut with silver colored Colt medallions at their tops. The grips have fairly even handling wear with some scattered light nicks and scuffs. The checkering is generally well defined with some smoothing toward the bottom. There are no chips or cracks. Overall, the grips are in Very Good condition.

Overall Condition: This revolver retains about 95% of its metal finish. The finish is thinning at some edges, most notable at the leading edges. The grip straps have faint handling wear and a few spots of minor surface oxidation. The action shows light operational wear including a thin turn-line on the cylinder, only through the finish in the lead-in grooves. There is some discoloration in the unfinished side faces of the hammer spur. There are a few scattered minor nicks and scuffs. The screw heads range from sharp to lightly tool marked with strong slots. The markings are clear. Overall, this revolver is in about Fine condition.

Box, Paperwork, and Accessories: This revolver comes in a (modern) two-piece cardboard craft box with hand-written label and a Colt Archive letter confirming that this revolver shipped in its present configuration on December 16, 1942 to Lt. Commander A. B. Leggett, Navy Depot, Room 2732, Washington D.C. as one of 30 guns of the same type in the shipment. Also included is some documentation including an excerpt (tragically consisting of pages physically removed from a First Edition) from the book “A Different Kind of War” by Vice Admiral Milton E. Miles, USN. Please see Our Assessment for more discussion of these connections.

Our Assessment: The Detective Special had been very popular with law enforcement and civilians who carry a concealed revolver as it allowed for a six-shot revolver in the same frame size as other revolvers which only offered a five-round capacity. This example is a little more interesting, having been shipped to Lt. Commander A. B. Leggett in room 2732 of the Washington D.C. Navy Depot. Leggett, known to his colleagues as “Abie”, was the Recorder of the Navy Interior Control Board. This was a fascinating group which was responsible for overseeing the design of, developments and inventions which would improve, and the continued desirability of existing controls installed in Navy vessels. This includes weapons, organization, material facilities, procedures, damage control, fire control, aircraft control and communications. Indeed, members of the Interior Control Board were among the first to learn of the invention of the transistor and see its potential for use in ship control.

But, you might find yourself wondering, what purpose could these officers have for thirty Colt Detective Special revolvers? Certainly their work was important and needed to be protected, but they were deep within the Navy facilities in the nation’s capital city, and they were further certainly able to access standard-issued Navy sidearms. As it turns out, Lt. Commander Leggett had another important duty which he carried out from room 2732. He served as the liaison between the Navy in Washington and Commander Milton E. Miles. Already having extensive experience in China, Miles was chosen to report to the American ambassador and serve as a Naval Observer, while also secretly creating a weather reporting network, gathering intelligence and preparing the coast for projected amphibious landings.

While Miles was able to form a good relationship with the local Chinese spymaster, General Tai Li, the General had a rather severe distrust of U.S. Army General Joseph Stillwell as well as the OSS. When the Sino-American Cooperative Organization was proposed, Stillwell suggested that it be left to Miles and Tai and the OSS made an end-run by simply appointing Miles as the director of OSS operations in the Far East. SACO’s mission being to train guerilla and intelligence groups as well as establishing weather and radio intercept stations, would have a more understandable need for thirty concealable revolvers, and this shipment was issued to SACO volunteers. In point of fact, Lt. Commander Leggett had even made a trip to Chungking to personally improve ties between agents in the field and the office in Room 2732.

This revolver comes from the collection of author Kevin Williams, best known for his exceptional work on the topic of General Officers Pistols & Clandestine Organization Pistols of WWII, and credit must be given to him for sleuthing out the fascinating connection between America’s espionage efforts in China and Room 2732, an otherwise boring room deep within the Navy facilities in Washington D.C., officially responsible for designing ship controls and best known within the building for brewing good coffee. Despite all this, Lt. Commander Leggett of the Interior Control Board would be able to boast “All that Captain [Jeffrey] Metzel and I have to do is say ‘boo’ and Colonel Donovan buys us the White House”, in direct reference to the increase in available funds and supplies that Miles’ OSS connection would provide. This revolver will make a great addition to any collection, and the included documentation from its previous owner, Mr. Williams, will only enhance its value. Good luck and happy bidding!