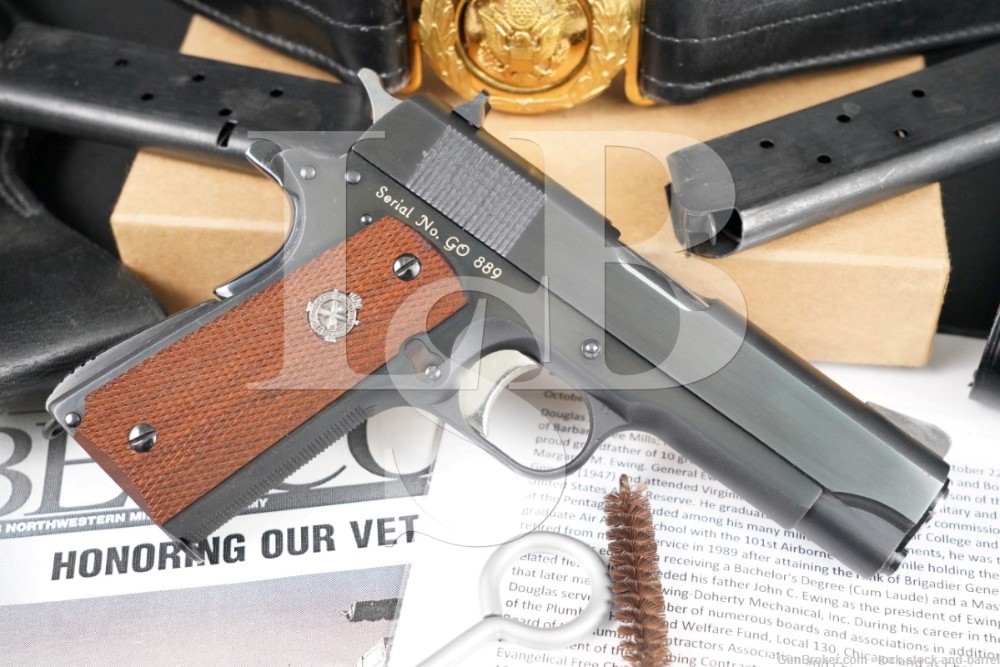 Bore Condition: The bore is mostly bright and the rifling is sharp. There is a little minor erosion in the bore just in front of the chamber.

Overall Condition: This pistol retains about 96% of its metal finish. There are a few minor nicks and scratches, most notable on the left slide flat an a light scratch under the slide stop on the left of the frame. There are infrequent spots of minor surface oxidation. The action shows minor operational wear. The screw heads are sharp. The markings are clear. Overall, this pistol is in about Fine-plus condition.

Box, Paperwork & Accessories: This pistol comes with a total of three 7-round magazines, black leather belt with gold plated interlocking eagle and wreath buckle, black leather Buchemier “Deputy” model B16-74 bolster, black leather two-magazine belt-pouch with “lift-the-dot” closure, cleaning rod, bore brush and some documentation about General Douglas Ewing including a photocopy of the Winter 2004 edition of St. John’s Northwestern Military Academy “The Beacon” which contains his obituary. Each of the magazines is hand-scribed with “889” on the bottom-right.

Our Assessment: While Colt 1903 and 1908 models were used as General Officer pistols from 1944 until 1972, both models were discontinued by Colt in the 1940s and the Army’s inventory eventually ran out. Rock Island Arsenal tested some commercial models, including the Walther P38 and Smith & Wesson 39, but eventually decided to produce their own GO pistol by customizing 1911A1 model pistols. Gunsmiths at the Arsenal were already very familiar with this sort of work after producing many National Match competition pistols. The result of their work was the M15.

First introduced in 1972, the M15 has a 3/4? shorter slide, a single locking lug for the barrel, National Match sights, National Match trigger, proprietary spring-loaded full-length guide-rod assembly, recoil spring plug and bushing, and the barrel is chrome plated. The frame was modified with National Match style checkering on the frontstrap, six horizontal serrations on the mainspring housing and Herrett’s grips customized with a name plate and Rock Island Arsenal escutcheon. Only 1,004 were produced before the model was discontinued due to cost concerns.

This example, GO 889, was issued to Brigadier General Douglas J. Ewing. General Ewing was a native of Chicago, Illinois who graduated from Northwestern Military and Naval Academy in Lake Geneva, WI in 1947, going on to attend Virginia Military Institute, joining the United States Army Reserve, graduating from the US Army War College and carrying out several assignments at the Pentagon. Among his many accomplishments, in 1979 he became the oldest graduate of Air Assault School as a Colonel, at the age of 50, an accomplishment which has only recently been surpassed.

Complete with proper GO belt, holster, magazine pouch, magazines, cleaning rod and brush, this pistol is not just a great example of a Rock Island Arsenal M15 General Officer Pistol, with its issue being documented, it also comes from the personal collection of Kevin Williams, best known for his exceptional work on the topic of General Officers Pistols & Clandestine Organization Pistols of WWII. This pistol will make a wonderful addition to a collection of military firearms, especially with its rich history. Please see our photos and good luck!