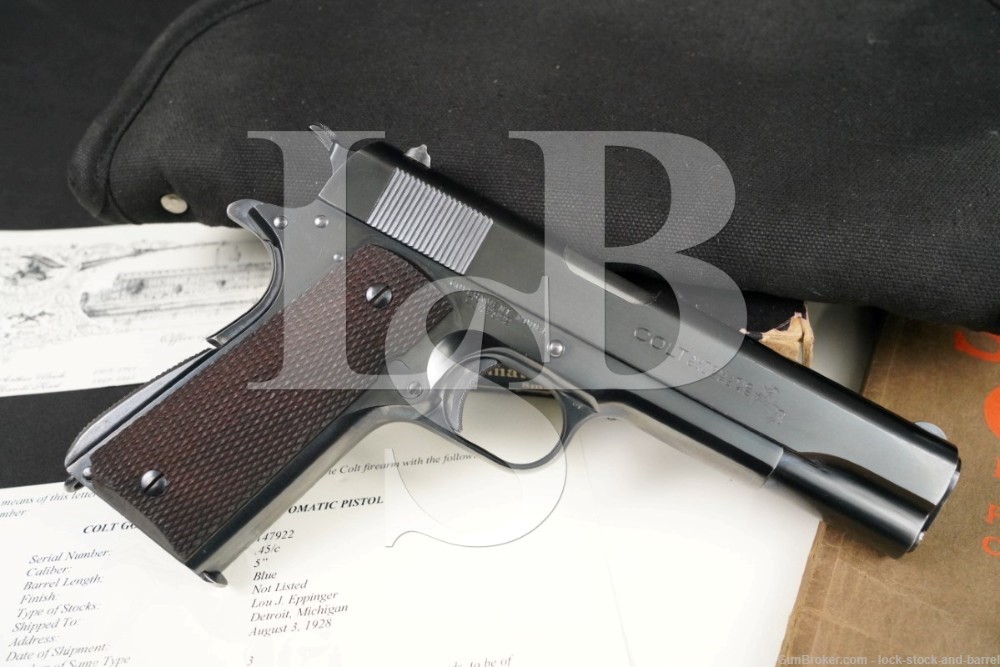 Year of Manufacture: Colt’s serial-lookup indicates production in 1926 (https://www.colt.com/serial-lookup), the included Colt letter indicates that this pistol shipped in 1928.

Stock Configuration & Condition: The grips are two-piece checkered walnut. The left panel has a chip-loss at the top-front. There are a few light nicks, most notable at the bottom edge of the left panel at the front. The checkering is generally sharp. There are no cracks. Overall, the grips are in Very Good condition.

Overall Condition: This handgun retains about 96% of its metal finish. The finish is generally strong throughout with light thinning at some edges, a few minor nicks and scratches, and a light “idiot mark” under the slide stop. The action shows minor operational wear. The screw heads have light tool marks in their sharp slots. The markings are clear. Overall, this pistol is in Fine condition.

Box, Paperwork & Accessories: This pistol comes with a hinge-lid cardboard Colt box, a single 7-round two-tone magazine, Boyt zipper case, a Colt letter and a Lou J. Eppinger 1925-26 Fall and Winter Sporting Goods catalog. The magazine has minor operational wear, infrequent faint surface oxidation, intact feed lips and a strong spring, with “BHS” hand-scribed on the floorplate. The box doesn’t have a serial number on it, but the label is model-matching and “BHS” is hand-written on the bottom. The Colt letter confirms that this pistol shipped in its present configuration on August 3, 1928 to Lou J. Eppinger in Detroit, Michigan as one of three guns of the same type in the shipment.

Having secured a contract for the US Military sidearm, Colt also offered the pistol to the commercial market as the “Government Model”. This is a Colt commercial Government Model made in 1926, shortly after the updates were applied which would result in the 1911A1. Namely, the new design had relief cuts in the frame on each side behind the trigger, a short, checkered trigger, and arched mainspring housing. During this period, Colt also serial-marked the slide, so it is nice to know that the slide is original to the frame. The pistol is in Fine condition, appearing to have seen little use and gentle handling over the last 95 years. Of note for the collectors, a Colt Archives letter is included which indicates that this pistol was shipped in 1928 to the sporting goods seller Lou J. Eppinger and a vintage Eppinger catalog is also included! All of the old 1911 Colts are collectable, and this will be a great example to add to any collection. Please see our pictures and good luck in your bidding!