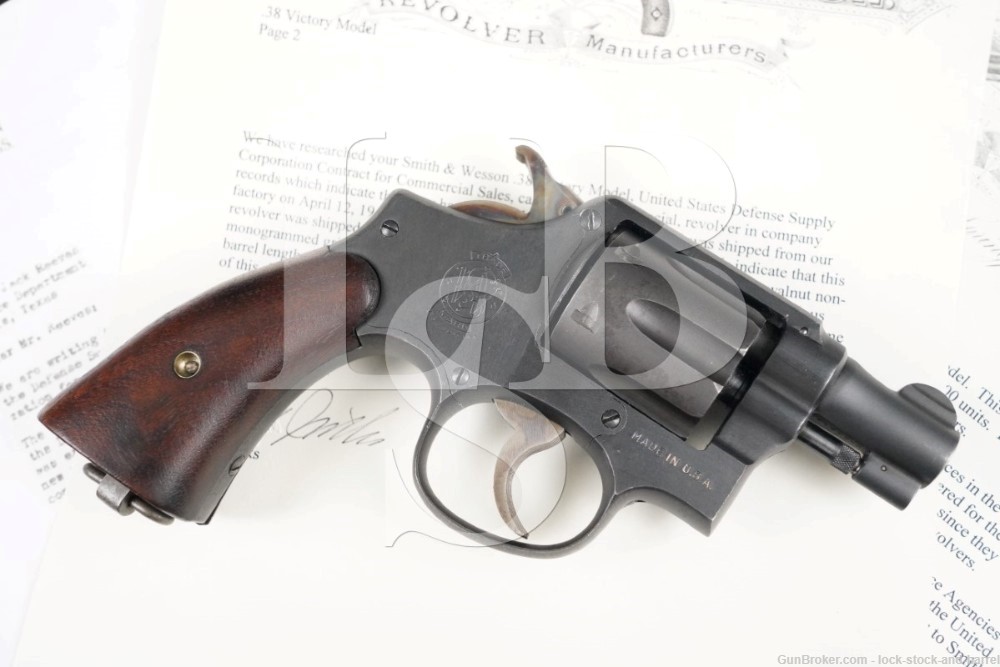 Markings: The left side of the barrel is marked “SMITH & WESSON / 38 S.&W. SPC CTG”. The butt of the grip frame, barrel flat, rear of the cylinder, front of the ejector star (no letter prefix), and rear flat of the yoke (no letter prefix) are marked with matching serial number “V629214”. The side plate has S&W’s monogram logo, the right side of the frame is marked “MADE IN U.S.A.”. There are inspection marks on the crane, its cut, and the sides of the grip frame. The left side of the frame is marked “P” at the top rear corner of the cylinder window. The rear face of the cylinder is also marked “P” and “S”. The interior of the right grip panel is stamped with numbers that do not correlate to the serial number. The butt of the grip frame is also marked with a flaming bomb.

Stock Configuration & Condition: The grips are two-piece smooth walnut. The fitment is imprecise, shy in some areas and proud in others, this is most noticeable at the butt of the grip frame. There are some light handling marks. There are a couple of minor compressions, most noticeable on the left panel down at the bottom. There are no cracks. Overall, the grips are in about Fine condition.

Overall Condition: This handgun retains about 89% of its metal finish. There is thinning and finish loss on the edges. there are some scattered spots of discoloration from previous oxidation, the most noticeable are on the cylinder and right side of the frame. There are some light scuffs and areas of minor thinning. There are light handling marks. There is a faint line on the cylinder. The screwheads are lightly tool marked. The markings are clear. Overall, this revolver is in about Very Good-Fine condition.

Box, Paperwork & Accessories: Included is a Smith & Wesson letter, Smith & Wesson factory invoices, letters between Smith & Wesson and the original purchaser, and correspondence regarding the revolver between Mr. Williams and collector colleagues.

Our Assessment: At the beginning of WWII S&W began producing their M&P revolver for military use. They added a “V” for Victory to the serial number; this iteration thus became known as the Victory Model. As we entered the fray, we were producing them for U.S. forces as well as for our allies. Victory model revolvers were standard issue for Naval and Marine aviators as well as guards back in the States at defense installations and factories supporting the war effort. While we did get the Victory and win WWII, the revolvers went beyond the call of duty and were used long after the conclusion on the conflict. Continuing after WWII, regulations prohibited the 1911 and 1911A1 from being carried with a loaded chamber, this made racking the slide a difficult task for aviators as well as K9 handlers so revolvers were the clear choice. The preferred issue of revolvers for aviators lasted quite a while, and Army helicopter pilots even used Victory Models until they replaced them with modern double action 9mm semi-autos, a testament to the S&W design. This one comes from the collection of author Kevin Williams, best known for his exceptional work on the topic of General Officers Pistols & Clandestine Organization Pistols of WWII. The Smith & Wesson historical letter is from 1945 and was part of a United States Defense Supply Corporation Contract for commercial sales and was delivered to Chief Jack Reeves who was the Chief of Police in Paris, Texas. There is a 1945 correspondence between Mr. Reeves and Smith & Wesson discussing the alteration to 2″ and what it would cost. The total cost for a new barrel, center pin, extractor rod, locking bolt, and labor was $1.50… now a sum of $23.96. The Smith & Wesson letter states that the whole shipment of 100 guns shipped on April 12, 1945, but there is a Smith & Wesson repair department invoice that states that three revolvers were to be converted to 2″ before shipment and this one is listed by serial number, this invoice is also dated April 12, 1945. This is an already rare revolver with an even more fascinating story. With its rare 2″ barrel this is a nice addition to a WWII, U.S. Martial, or Smith & Wesson collection. Drop a bid on this revolver, you never know, in 77 years it may have gone up in price by nearly %1500 just like the cost of a 2″ barrel conversion. Please see our photos and good luck!