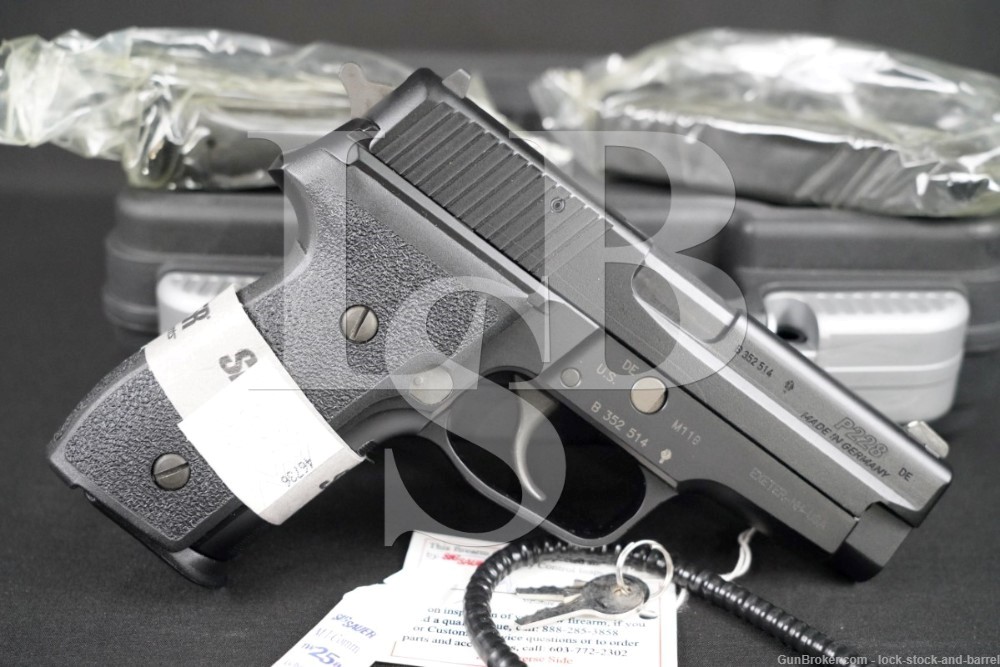 Stock Configuration & Condition: The grips are two-piece textured black plastic which wrap around the backstrap. The frontstrap of the frame is serrated. The grips have no notable wear or damage, only light handling marks. There are no chips or cracks. Overall, the grips are in Excellent condition.

Overall Condition: This handgun retains about 98% of its metal finish. The action shows minor operational wear and there are a few tiny marks. Otherwise, there are only light handling marks. The screw heads are sharp. The markings are clear. Overall, this pistol is in Excellent condition.

Mechanics: The action functions correctly. The slide has very little play to the frame. The double action trigger is smooth, the single action has a smooth takeup with just a little creep before breaking. We did not fire this handgun. As with all previously owned firearms, a thorough cleaning may be necessary to meet your maintenance standards.

Box, Paperwork & Accessories: This pistol comes in a black plastic Sig case with serial-matching label, cable lock, a total of three 13-round M11/P228 magazines, an article by Jim Barrett about the M11-B model, and information collected by Kevin Williams while he owned the pistol. One magazine is inserted in the pistol, showing faint operational wear. The other two magazines are still sealed in packaging. Please note, no magazines will be included for purchasers who reside where they cannot be legally transferred.

Our Assessment: While the P226 would ultimately lose out to the Beretta 92 in the XM9 service pistol trials, Sig’s P-Series pistols have still gone on to have a huge following in the commercial, law enforcement and military markets. Their P228 model has seen favor in the military for roles which require a smaller pistol than the M9, and the United States dubbed it the M11, seeing service in the Army, Navy, Air Force and by other DOD personnel.

This is quite the rare opportunity at a commercially released M11 pistol, re-marked and sold as an “M11B” due to contractual restrictions on Sig Sauer selling M11 pistols. Produced in 2010, this pistol was made for an Air Force contract but there were approximately 40 pistols which did not make it to the Air Force. These M11 pistols had a “B” suffix added to the model designation for sale on the commercial market, and are in every other way an M11, from the folded-steel slide with welded breech-block insert to the M11 13-round magazines (please note, this pistol will not be compatible with current production P229-1 style magazines). For additional corrosion resistance, several small parts have a phosphate finish and the slide has a desirable K-Kote finish.

Just to put a cherry on top, this one comes from the collection of author Kevin Williams, best known for his exceptional work on the topic of General Officers Pistols & Clandestine Organization Pistols of WWII. The pistol is in Excellent condition, comes with its original Sig Sauer case as well as some information collected about the M11B pistols by Mr. Williams. Collectors of both Military sidearms and Sig Sauer pistols in general will not want to miss out on this M11B. Please see our photos and good luck!